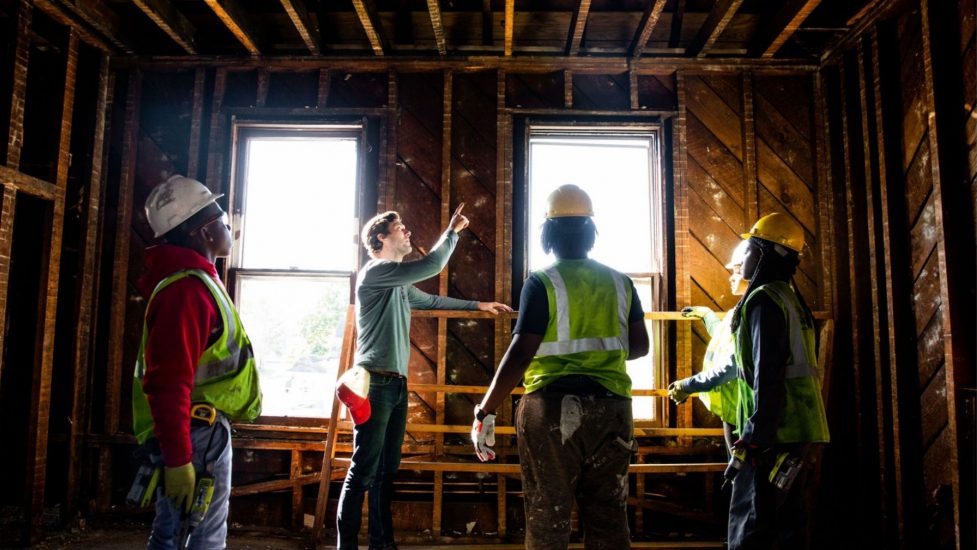 In a once-thriving Alabama neighborhood, high school students are combining work-based learning in the construction and real estate trades with in-classroom courses with an eye toward rebuilding their community and building a pathway to the middle class.

Build UP is an accredited private high school in the Ensley neighborhood and currently has three cohorts of 66 students.

“We usher kids through postsecondary in partnership with community colleges and provide work-based learning opportunities through paid internships and apprenticeships in the construction and real estate industry,” explains Martin.

The six-year track includes obtaining a high school diploma, an associate’s degree, and then one of three pathways to the middle class. Those paths being—getting a construction job, transferring to get a bachelor’s degree, or starting a business.

After completion of these requirements, students are eligible for an interest-free loan to buy one of the renovated homes.

Because Build UP launched three years ago, there is not yet a student who has finished the six-year program. But some students and their families are currently renting renovated homes—not paying more than their previous rents.

Martin says the area once had a thriving steel industry. “At one point, this tiny little community of Ensley in the early 20th century was producing more steel in 24 hours than any other place in the world,” he explains.

Over the course of about 20 years, beginning in the 1960s, Ensley’s steel jobs relocated elsewhere, and desegregation led to to about 90% of the residents moving to the suburbs, says Martin. “Ensley went from about 45,000 residents to 4,500. There was a mass exodus of resources, as well, including economic activity, restaurants closing, and houses being abandoned.”

That empty housing stock and blighted lots have become classrooms for the Build UP students. “We’re doing about 35 hours a week in the class, and 14 hours a week on job sites,” says Martin.

The program accesses properties through a variety of efforts. “Buying off the county courthouse steps where they have tax-delinquent auctions. Buying from auction.com. Getting something that’s foreclosed from the bank. If there’s property we really like, tracking down the owners and saying, ‘Hey, would you be open to selling it?’”

A number of homes from other neighborhoods—scheduled for demolition to be replaced by larger houses—have been donated to the program and physically moved to Ensley.

The Ensley students are working on, or have completed, 10 homes in the area.

When asked about how the program funds the property purchases, Martin says, “Ideally what we’re doing is setting up a construction company that will be profitable or at least can break even.” He notes Build UP receives federal, state, and city funds, including community development and affordable housing dollars.

The students participate in traditional academic classes for part of the school day. Another portion of the day focuses on linked learning—working with the Home Builders Institute HBI on projects that fulfill state education requirements while still preparing them for potential careers.

“One course we have is geometry and construction. It’s learning 10th grade geometry that everybody in the state has to learn, but it’s learning through the lens of miter saws and 2x4s. It’s all done at the school in a shop-like setting,” explains Martin.

“They get exposure to all of the trades—plumbing, electrical, roofing, framing, a little bit of HVAC. They’ve done a little bit with welding,” says Martin.

Classes also cover areas other than the skilled trades. Martin says, “We also have white-collar stuff like site safety. You’re learning OSHA. You don’t have to lift a hammer. You just need to make sure the people who are lifting hammers are doing it right. And working with architects and designers, because there are a lot of white-collar jobs in construction and real estate.”

Martin says it’s important for the students to experience the change that is improving their community. “There’s nothing more relevant to [the students] than the broken windows— literally and figuratively—that they walk past every day, drive past on the way to school. So when they can be a part of the change, that’s game changing for both them and their neighborhood.”

“On a new job site, more novice students are doing demolitions, knocking a wall down. There’s some landscaping, clearing blighted land. That’s part of what builds agency, but also helps make a difference by clearing overgrowth.”

“As [students] move further along in the program, we want them thinking about what they’re good at, what they enjoy, who they could see themselves becoming. That’s where you then start to really develop a foundation and aspire to be something,” explains Martin.

“One of our favorite sayings is, ‘A kid can’t be what a kid can’t see.’ Too many of our youth don’t grow up with those role models.”

“Learned helplessness when combined with learned hopelessness just leads to despair and a negative cycle of downward spiral for communities,” says Martin. Even though the program is relatively new, he is hopeful Build UP can help create pathways to good careers and the middle class.

Martin says Build UP is not a silver bullet, but certain aspects of the program keep the students coming back. “Paying them, keeping them engaged, having it run till 5:00 PM, having opportunities all summer long, all that stuff does help for sure.”

Build UP is expanding to a second campus in nearby Titusville in the coming school year with plans to double its enrollment. Eight homes are lined up in and near the area. The program is also launching a site in Cleveland in August 2022.

After working a number of years as an educator, Martin says the system needs fixes. “We put too much burden on teacher’s shoulders. They can’t do it all by themselves. We’re burning them out, they’re leaving the profession.”

“We have to involve people differently. We have to push the work of empowering people out to the communities. Ultimately, that’s liberation and it has to be the greater community taking all these pieces and doing it.”