Skills for Chicagoland’s Future has an important mission: matching businesses in need of skilled workers with qualified unemployed or underemployed job seekers. It is accomplishing this in a unique way.

“A lot of times the workforce system is focused on getting somebody trained and then hoping and praying that they’ll have a job. This model is kind of flipped. It starts with the job,” according to CEO Marie Trzupek Lynch.

Skills for Chicagoland’s Future is a six-year-old public-private partnership that is closing the skills gap by getting businesses to commit to hiring workers with the agreement that the organization will recruit the right person for the open position.

“We sit with employers, listen to what their hiring gaps are, their challenges, what problem they are trying to solve, and our team develops customized recruiting for each of them,” explains Lynch.

More than 40 Chicago-area companies have filled their hiring needs by partnering with the nonprofit organization. The companies range from advanced manufacturing to technology to healthcare. Each company needs different talent and different levels of skills. The talent pool Skills recruits from is very specific — the overlooked long-term unemployed or underemployed in Chicago’s poorest neighborhoods.

The service is free for the job seeker and the business. Sixty percent of its funding comes from the private sector, corporate foundations, and community foundations. The other 40 percent comes from government funding. Skills for Chicagoland’s Future has been very successful in fulfilling its mission. It has placed more than 5,000 unemployed or underemployed job seekers in mostly full-time positions.

“There was a time when unemployment was well over 11 percent here. Certainly, unemployment is lower now, but there are many neighborhoods in Chicago which still have double-digit unemployment,” says Lynch. “Our world is like a sandbox of people who are looking for jobs.”

Lynch explains that when Skills launched in 2012, there was a stigma against the long-term unemployed. People from low-income neighborhoods were stereotyped: they were “unemployed for a reason and that they weren’t qualified enough, maybe somebody wasn’t worthy. We really tried to combat that stigma. We spent a lot of time the first many years really building the case that you can hire the unemployed, that they have good retention rates and that they’ll be a good workforce,” says Lynch.

The other problem that the nonprofit has worked hard on is closing what it calls the “access gap.”

“A large number of people who are qualified for jobs would have had a job if it were not for their gap in service and were it not for the fact that they don’t have the right neighbor to get their résumé to the top of the pile,” Lynch says.

There’s substantial evidence that when you’re looking for work “who you know” matters. A survey by LinkedIn shows that about 85 percent of jobs are filled through networking.

Lynch highlights the job search paradox: “About 85% of jobs come through networking, but people are spending 85% of their time looking for work online which is a black hole.”

This puts the long-term unemployed and underemployed at a distinct disadvantage. Skills for Chicagoland’s Future’s team helps close the “access gap” by screening candidates, finding workers with the skills the company is asking for, getting them ready for the interview, and putting them face-to-face with a partner employer.

“Our first year out, we had to have a lot of education conversations that we were never going to push somebody on an employer to hire that they wouldn’t hire on their own,” explains Lynch. “They have to get that job on their own, but we know those employers really well. We’re the ‘neighbor’ to help you get [your résumé] to the top.”

Some of the jobs that the nonprofit helps fill for local businesses are entry-level, and some are middle-skilled.

“There’s certainly credentials sometimes that are required, like on the manufacturing side. Our team will look at a nonprofit partner,” Lynch says.

An example is the work Skills for Chicagoland’s Future did for Freedman Seating, a 125-year-old family-owned advanced manufacturing company that makes seats and benches for public transportation. In this case, Skills partnered with Dawson Technical Institute to find the company new employees.

“We looked at their graduates who were coming out with the certifications. Freedman is a good example, too, because they are open to people who have criminal backgrounds. They’re open to taking that shot. They are very committed to that,” says Lynch.

Lynch is the founding President and CEO of Skills for Chicagoland’s Future which was also co-founded by Penny Pritzker, the former Commerce Secretary under President Barack Obama and co-chair for the Council on Foreign Relations’ Independent Task Force on the future of work. When Skills first appeared on the scene, the jobless rate in Chicago was 8.9 percent and there was an emphasis placed on training the workers themselves.

Over the years, Skills for Chicagoland’s Future adjusted its training model. “Many of the employers were telling us that they were more interested in making sure that the soft skills were there, and that they had their own training. Their bigger concern was ‘find us folks who are team players, who have ambition, who are hard-working and punctual.’ We are here to put that puzzle piece in the middle,” explains Lynch.

Being that piece in the middle has become the organization’s central model for connecting businesses with workers. It’s a unique model that other organizations are adopting.

“President Obama held an unemployment summit and he put us out in the front. All of a sudden, other organizations were interested in our work,” Lynch tells me. “We got some funding to bring in 12 organizations and consult with them about how to do it. Then, we picked one to actually stand up.”

That is how Skills for Rhode Island’s Future was born.

“We built the infrastructure to do it, and Rhode Island was able to go much more rapidly than we were, right? They went through kind of the same series of steps we did, but they were able to get quicker results because they were able to utilize our things,” says Lynch.

Skills for Rhode Island’s Future is now two years old and gets 95 percent of its funding from state and local government. It’s one of the many training and jobs initiatives started since Rhode Island governor Gina Raimondo took office three years ago.

Governor Raimondo tells WorkingNation that she believes the quickest way to solve the workforce talent shortage is through collaboration.

“You have to bring the industry to the table and say, ‘Tell us, who are you going to hire?’ You have to work with nonprofits as well, who actually do the training. This is tough stuff. If you get everybody around the table with some agreement around what are the necessary skills, it’s magic,” Raimondo says.

“Our first couple years, we were heavier on the government side, as well. So, the longer you’re in, the more you can have those conversations with employers [about funding],” according to Lynch.

Part of that funding conversation is about results. Skills has tracked the workers and businesses that they’ve helped. After two years, the retention rate for those job seekers who found work through Skills was 75 percent compared to 62 percent for the long-term unemployed that found work on their own. There also was a difference of $6,000 more a year for the two groups, according to Lynch. “We were really thrilled that the group we were affecting the most were those who were the hardest hit. We also believe that it is a good value for businesses.”

“Our work is not done. We’d be happy to go out of business, but I don’t think we’re going to,” Lynch says. “Now, six years in, we feel like we have proven that employers will hire the unemployed. We are now at the moment of trying to inspire all the companies in Chicago to hire the unemployed, so we’ve gotten a little more ambitious.”

Find out more about the history of Skills for Chicagoland’s Future on their website and in the video below.

Join the Conversation: Share your thoughts about Skills for Chicagoland’s Future and the role it plays in connecting employers, trainers and job seekers on our Facebook page. 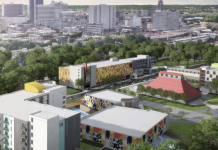 ‘Unbound: Retraining the American Workforce’: A WorkingNation Panel Discussion at 2017...