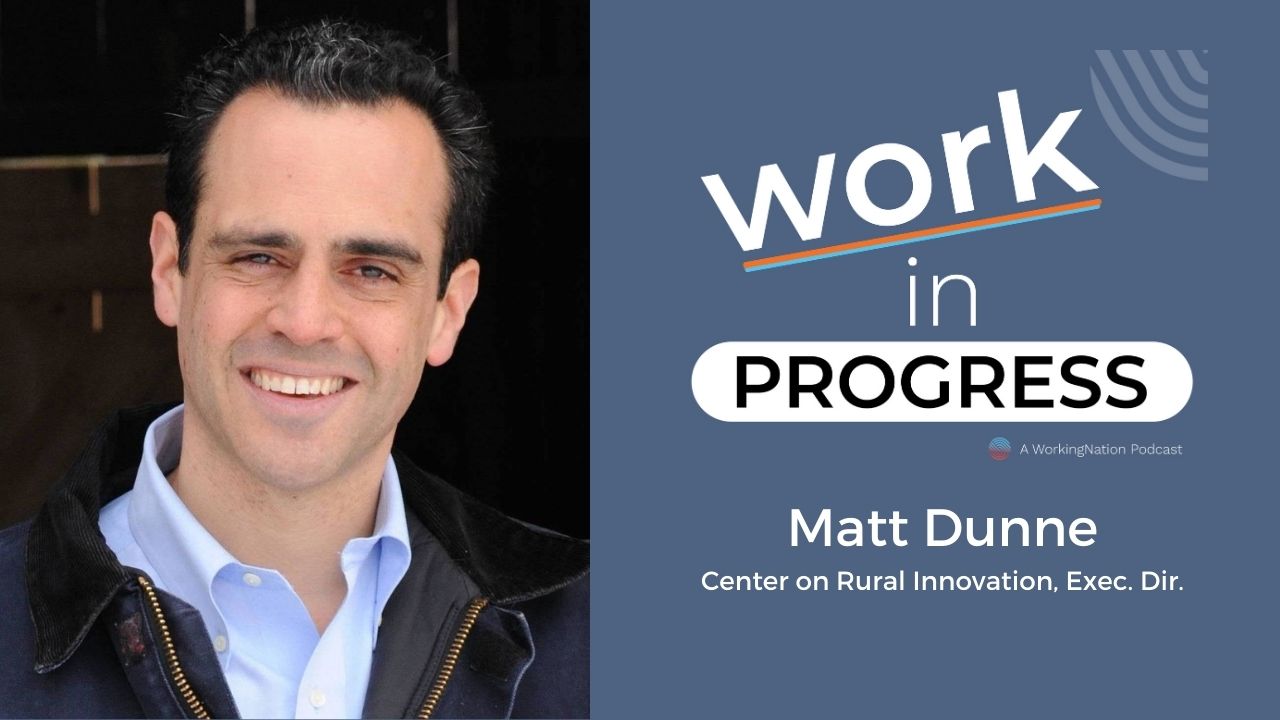 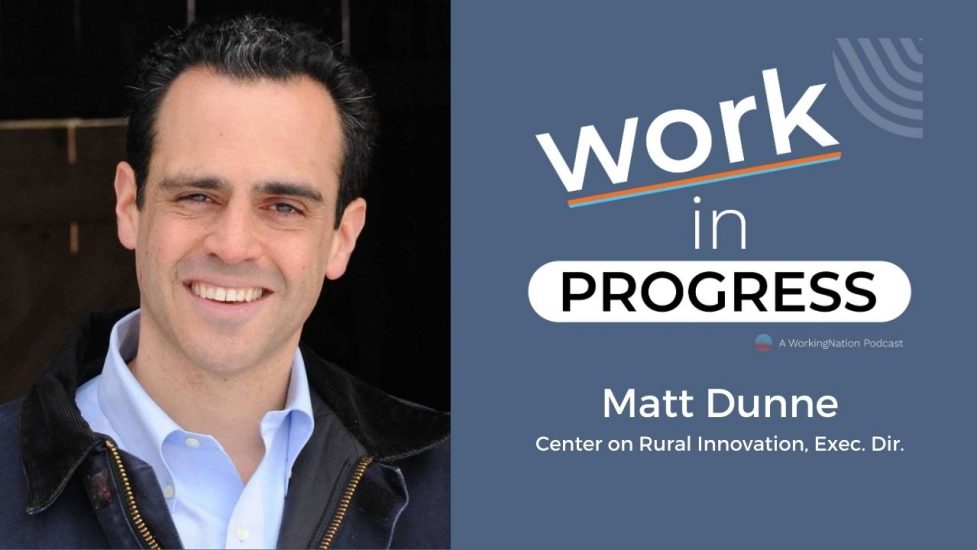 My guest this week on the Work in Progress podcast is Matt Dunne, the founder and executive director of the Center on Rural Innovation.

The Center on Rural Innovation (CORI) is a national nonprofit that Dunne describes as an “action tank dedicated to closing the urban-rural economic divide.” He says the focus is on building digital economy ecosystems to make sure that there is a more equitable economy, particularly in the face of automation.

“Even before the pandemic, we knew that if you were going to create digital economy jobs in rural places—which are the jobs that grow out of automation and the other real trends of our time—that you had to be on a level playing field in those economic models. And the very basic level is you need to have access to broadband.”

Dunne says that broadband has become all that more important in this current health and economic crisis. You need to be able collaborate with people, not just in your community but around the world. “You need to have access to what is now the largest, super computer ever created, which is the cloud computing infrastructure that can allow for technology products and services to really thrive, but only if you have that connection to them.”

Dunne tells me that many people think that it’s impossible to bring world-class broadband to rural places, but, he says, it’s just not true. He says that broadband is the result of some innovative collaborations.

“Rural communities—pretty much one at a time—have gone through a scrappy, individualized process of bringing fiber to the homes in communities that census tracts represent over 10 million rural people. So this can be done. They’re usually done in hybrid, public-private partnerships of some kind, and in many cases, they’re leveraging the kinds of organizations that brought electricity to those regions of the country, when the marketplace wouldn’t do that on their own.”

The Center on Rural Innovation partnered with the online learning platform Udacity on a program to help individuals in rural places acquire the skills to participate in the digital economy. “These include data analytics, front-end web development, and IT services. These are high-demand jobs in the technology fields that can be done remotely, but also have demand in rural places, even before we start to do the other part of our work, which is support and encourage scalable tech companies in these locations,” explains Dunne.

Udacity provided 300 nanodegree scholarships and CORI reached out through 18 network communities to let people know about the scholarships. More than 100 people are now pursing those nanodegrees which they should complete between now and the spring, depending on the program.

“Then we will be looking to place those individuals into jobs that might be local. Banks and hospitals frequently go in to hire tech talent out of places like Brooklyn, even though there is that capacity right in their rural community,” says Dunne. “So we’re going to try and do that matchmaking as well as engage with the companies that have made the decision that remote works.”

Opening the Doors to Tech Startups

“The real difference in the recovery from the 2008 recession that led to the urban-rural economic divide—the likes of which we have not seen in a century—came about because automation and globalization created a lot of jobs in the U.S. and it removed a lot of jobs. The jobs that were created were predominantly in urban areas—and the jobs that were removed were predominantly in rural—and a huge chunk of those were digital economy jobs in the technology fields.

“We believe there is a moment to seize where companies, out of necessity, have opened their aperture to hiring people that are not all in the same 25 zip codes. We think that there is a chance to make this work and to make it a permanent part of the way that companies function moving forward, and also allow for tech startups and investors to believe that tech startups can happen in rural places.”

There’s a lot more to hear about the efforts to bridge the urban-rural economic divide and create an equitable recovery across the country. You can listen to the full podcast here, or wherever you get your podcasts. 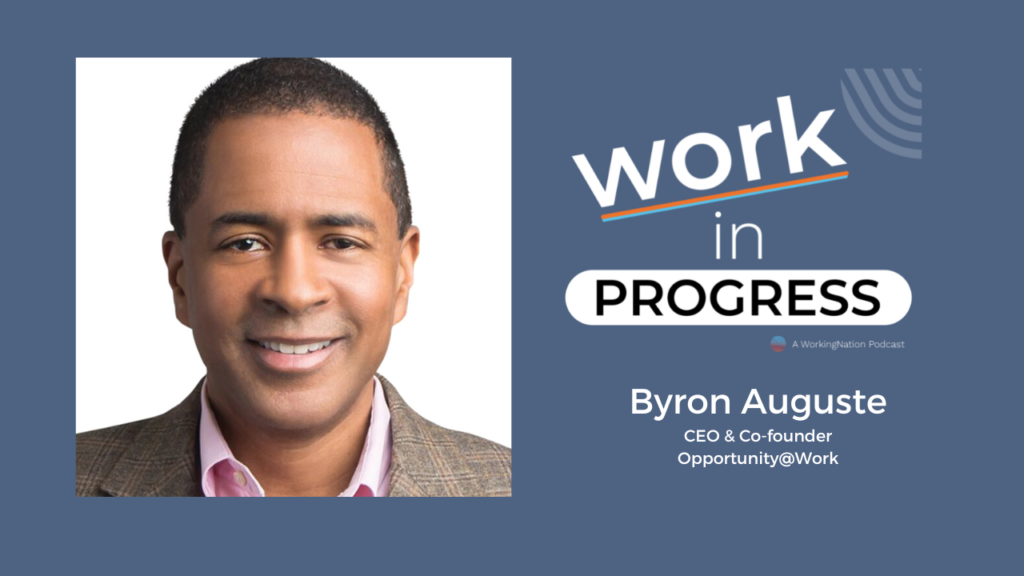 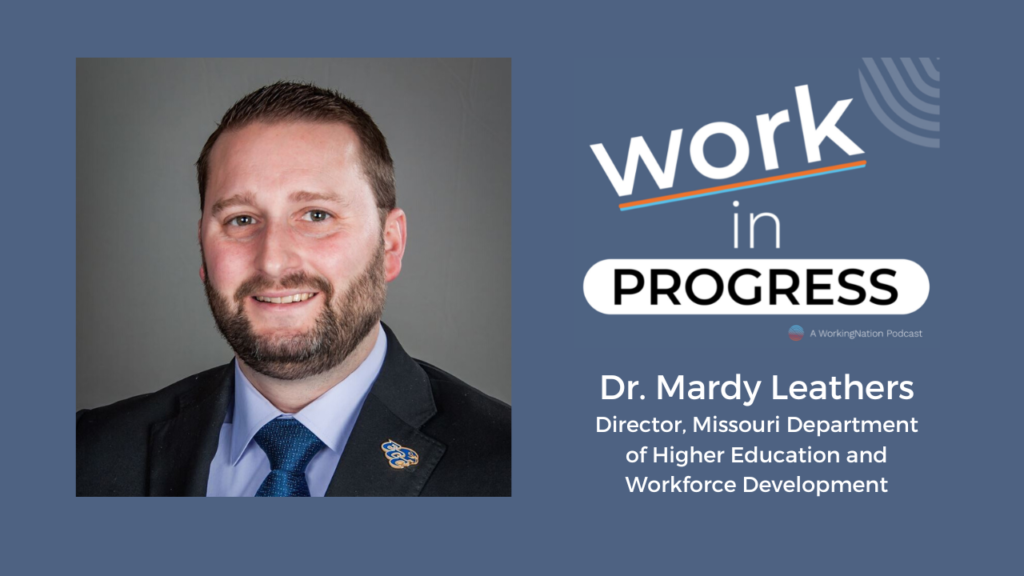