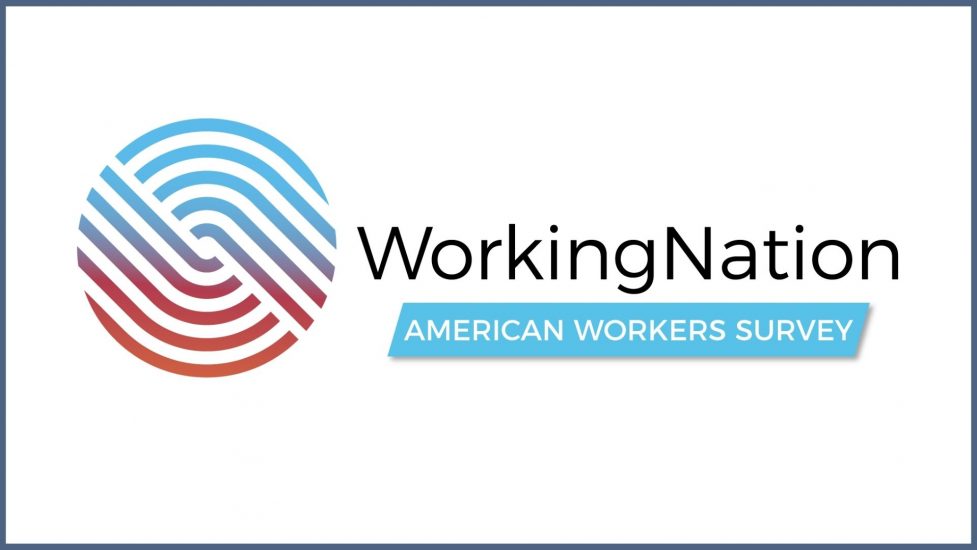 2020 was a challenging year for the American workforce. Millions of workers ended the year out of work and concerned about where they are going to find their next job.

Now, there is growing concern among many workers that they are not prepared for the jobs that do exist or the ones that will be created in the future.

They are also looking for answers to important questions, including where can they get the training they need to be competitive and to succeed as the economy rebounds from the pandemic-induced recession, according to the first WorkingNation American Workers Survey.

The way we work has been changing for decades as technology has evolved. It is clear that the pandemic accelerated the pace of changes in the workforce that were already underway. To be sure, the current path to getting hired looks different than it did even a few months ago. And that has workers worried.

The majority of Americans (63%) believe they don’t have the skills they need to keep up with these changes.

Two out of five American workers (40%) believe that a lack of “aligned skills” and/or “skills obsolescence” are cause for “significant concerns”, according to the survey.

Workers are rethinking what they’ve learned and what skills they are lacking. And they are asking how they get themselves ready for today’s jobs.

There is a sharp divide in how workers believe they will achieve that goal, according to the survey conducted on behalf of WorkingNation by the polling and research company FIL Incorporated.

70% of American workers believe that it is critical to be certified in a technology or trade skill, while one in three workers (30%) believe it is important to get a two-year or four-year degree. This is a far cry from the message we’ve been hearing for several generations—everyone needs a college degree to get ahead. Now we are hearing there are other paths.

Even as skills development is now viewed as a critical piece of the existing workforce’s thinking, more than half of the workers surveyed (56%) are unaware of existing programs to acquire in-demand skills, or how to find existing programs, according to the survey.

While 21% of workers trust employers to help them gain the skills they need to succeed at the jobs that need to be done now, two-thirds of workers (66%) tell WorkingNation that they have never been offered skills training by their employers.

There is definitely work to be done in this area, but here on WorkingNation.com you will find some examples of business-led initiatives that are creating a pipeline of talent.

Workers want to learn and they want guidance. “The challenge we face is not necessarily an opposition to skills training, but a lack of exposure to it,” according to the survey findings. This feeling is particularly acute for women (72%) and for workers earning under $50,000 annually.

In the end, despite their concerns, American workers want to upskill, and they are optimistic that it will lead to financial security for them and their families.

Seventy-two (72%) of people surveyed want “careers” vs. 28% who want “jobs”. And 75% of American workers are optimistic that they will ultimately achieve a middle class lifestyle through work.

Change is inevitable. Instead of looking at this with fear, WorkingNation believes we should look at it with hope. We believe we need to make sure our workforce is ready for those changes. We are a nation that has a robust and capable workforce that needs a new road map.

This means upskilling our workforce now to ensure that each man and each woman has the skills they need in an economy that is putting more emphasis on technical skills, knowledge-based tasks, and automation than ever before.

Now is the time to point towards workforce solutions that already exist—and may need to grow larger out of necessity—and towards new solutions that are evolving out of this current health and economic crisis.

Hiring managers are rethinking how they might signal what skills job seekers need to fill an open position.

Postsecondary education is rethinking how to best serve its students and help them prepare for what’s ahead in the workforce.

Educators and training program operators need to be clear on what their programs offer in terms of actionable skills that employers want. And once armed with these credentials—whether it is a degree, a certificate, or a license—workers have to figure out how to signal to employers they have these skills.

Working side-by-side—business leaders, educators, civic leaders, and workers themselves—we all need to collectively lean into the change, create new solutions, and be very vocal about sharing the opportunities available to reskill and retrain.

All this month, WorkingNation will be examining the findings of our American Workers Survey and speaking to people and organizations that are working to help solve these important skilling issues.