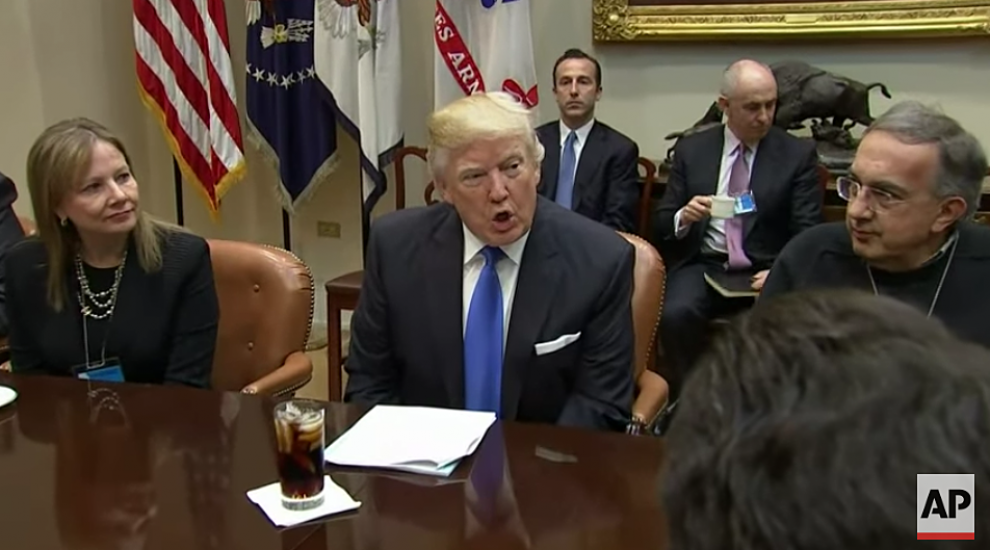 On Tuesday, President Trump continued his drive to bring jobs back to the United States.

First up, an early morning breakfast with the chief executives of America’s big three automakers — General Motors, Ford Motor and Fiat Chrysler — where he challenged them to create long-term jobs and production in exchange for more favorable regulations and tax policies. Those who weren’t at the table were foreign automakers, like Toyota and Honda, even though they “account for about 40 percent of the vehicles assembled in the U.S.”

In the meeting Trump promised a new climate for business, moving from one that he termed “very inhospitable to extremely hospitable,” and to streamline the regulatory approval process for new domestic manufacturing operations — a move he put into action later Tuesday through an executive order.

Following the meeting, all three chief executives said they were very encouraged by the president and the economic policies that he is forwarding.

In addition to signing an executive order to streamline the regulatory approval process for new manufacturing operations, President Trump also signed four other orders Tuesday in the name of American jobs.

Three of those cleared the way for construction on the Dakota Access and Keystone XL pipelines which would be subjected to renegotiations. During the signing of the Keystone XL order, Mr. Trump said implementation of the pipeline would result in 28,000 jobs. While signing another order requiring that the steel used in the pipelines be made in the United States, Trump said it was, “Going to put a lot of workers, a lot of steelworkers, back to work.”

In addition to the order to expedite construction of not only the pipelines, but all infrastructure projects, the President also signed an executive order Tuesday to expedite environmental reviews of those projects.

“This is about streamlining the incredibly cumbersome, long, horrible, permitting process,” Mr. Trump said during the signing ceremony. “If it’s a no, we’ll give them a quick no, and if it’s a yes, it’s like ‘Let’s start building. […] The regulatory process in this country has become a tangled up mess, and very unfair to people.”

“These pipelines will strengthen our nation’s energy supply and help keep energy costs low for American families. Congress is committed to working with President Trump to move forward with safe and vital infrastructure that will boost our economy and create thousands of good-paying jobs in states across the country,” Ryan said in a statement Tuesday.

Thanks to @POTUS, the #KeystoneXL and #DakotaAccess pipelines can finally be built. It’s about time. https://t.co/FrUJl2JnR0

Keystone XL supporters have always claimed the project will create thousands of new jobs. A previous report from the State Department expects that the project would result in only a few permanent jobs that last past construction.