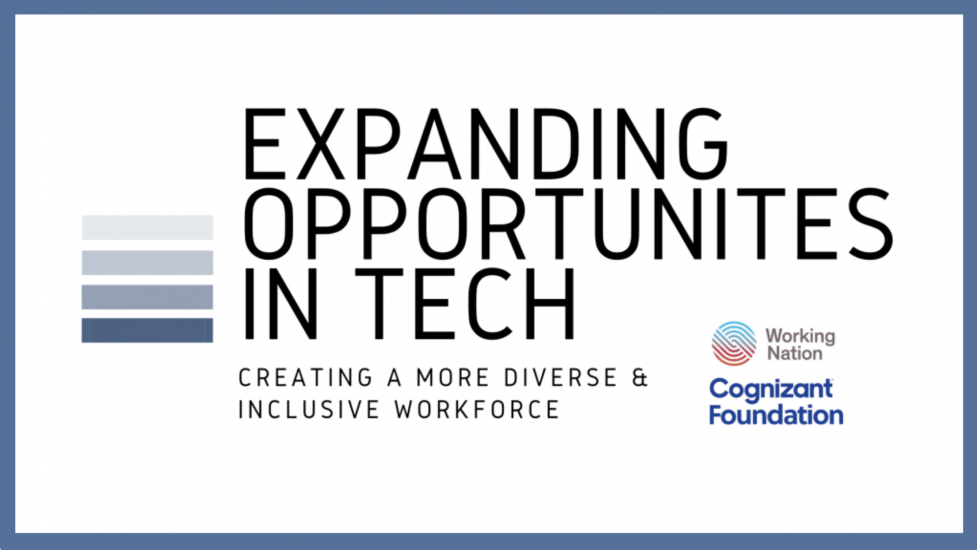 The lack of diversity in the tech industry is not a new problem. It’s an issue that’s been front and center for years. COVID-19 just made the need to solve it all the more urgent if the recovery from the pandemic is going to be a recovery for everyone.

WorkingNation has partnered with Cognizant U.S. Foundation to explore the topic in a series of podcasts and articles, beginning with this one and continuing for the next six Fridays here on WorkingNation.com.

“There’s really limitless opportunity. Tech careers—it’s a modern-day gold rush. This is the place to be if you want to increase your chances of having an upward mobility. Being interested in technology, and developing that technical and digital literacy, is going to open up immeasurable opportunities for you.”

Michael Ellison is the co-founder and CEO of CodePath. His nonprofit is working to—in his words—”reprogram and rewrite the infrastructure of higher-ed CS (computer science) education to dramatically change the pathway to opportunities for underrepresented minorities in software engineering.”

And he’s right. There are a lot of opportunities ahead. An estimated 3.5 million computing-related job openings are expected to become available over the next five years.

For the immediate future, though, the pandemic has created some roadblocks that need to be addressed.

Even before the pandemic, the makeup of the tech industry was decidedly white and male with one-third of the jobs being held by women or traditionally underrepresented groups, according to the Computer Trade Association.

The tech industry is made up of many different careers, but let’s take a look at diversity among software engineers and developers, as an example. Around 6% are LatinX and around 5% are Black and that’s compared to those two groups together making up closer to 30% of the general population at large. Women make up 14% to 29% of those jobs at Fortune 500 companies. Over the past three decades, despite the exponential increase in all tech jobs, the percentage of women in the industry has declined.

Despite the continuing dependence on remote work and the growing demand for workers with digital skills in all fields, the tech industry has not been spared in the resulting jobs crisis.

“The impact on women has just been astounding. I don’t think we all knew that was happening. I don’t think we understood the sort of the reach nor do we have a real strategy to respond to that,”  says Kristen Titus, the executive director of Cognizant U.S. Foundation, which helps fund training and mentoring programs for those underrepresented in the industry.

COVID-19 has added an additional hurdle. Many of those tech job cuts have come at the entry-level.

“Entry-level opportunity is shrinking the most in the tech market,” says Matt Sigelman, CEO of Burning Glass Technologies, an analytics software company that provides real-time data on job growth, skills in demand, and labor market trends. “Across the (job) market overall, the share of all hiring at the entry-level has actually grown by 8%; in tech the share of all hiring that’s at the entry-level is down 7%.”

“You would think that the surge to remote work would prompt employers to staff up in IT jobs, but that hasn’t happened.” Instead, says Sigelman, “employers are largely meeting the challenge with the workforce they have. It isn’t so much that the tech workforce is being laid off as that companies have been pulling back hard on hiring.”

Herein lies a huge problem, according to Titus and others we’ve spoken to for this series.
“Entry-level positions really began with an internship, really began prior to a full-time entry-level role,” says Titus. With the pandemic leading to job cuts at the entry level, many of these first paid opportunities—that first introduction into the professional environment, that first contact with potential employers—are also drying up.

Sigelman agrees, but he goes further. The diversity problem isn’t just caused by the pandemic. It is more systemic.

“Since most companies define diversity as a hiring problem, pulling back on hiring gives them fewer opportunities to hire diverse workers,” he says. “Companies need to make sure that they aren’t constructing obstacles to equitable hiring.”

“But, I am not sure that’s the real issue,” Sigelman tells WorkingNation. “Most companies are more diverse at the entry level than at the top. That suggests they are hiring diverse workers but not developing or retaining them—which is a completely different challenge.

What are the Barriers?

WorkingNation has spoken with dozens of organizations and individuals about the issue of diversity in the tech industry. In addition to the impact the pandemic has had on the hiring process, several other recurring themes have emerged—a broken education system, access to mentorships and paid apprenticeships, visibility of role models, and creating a more equitable and inclusive environment within the industry.

Here is a very small sampling of what we’ve heard:

“COVID has disproportionately impacted underrepresented populations. We’ve seen the numbers. We’ve seen the data. We’ve heard the stories. And we don’t have a targeted plan to address the barriers that many of these populations are facing. I think it’s time that we pause and reflect on the needs of each distinct population and put forward strategies that are all-inclusive that address each of those barriers and level the playing field for everyone.”
– Kristen Titus, executive director, Cognizant U.S. Foundation

“The fact remains that, despite the fact that the industry says ‘we don’t care if you have a degree, we just care if you can code,’ 60% of software developer job postings explicitly require a college degree. That excludes many who might have the right skills, creating obstacles for communities that are less likely to have had access to a college education.
– Matt Sigelman, CEO, Burning Glass Technologies

“COVID came in fast to the tech industry, and there were things in March that I’ve never seen before. We saw students who were out on the job hunt, who had been offered jobs and had signed offers, had start dates coming up at the beginning of April, and then had those offers rescinded. When I saw them pulling back offers, that was the blinking alarm. Getting a job from March to about July was pretty tough.”
– Jeff Casimir, executive director, Turing School

“We had to move the whole thing online. There are some important wraparound services that we need to provide. We need to make sure that all of our Winterns or Sprinterns have computers and have Wi-Fi access, which some of them don’t. And so when it was in-person, the companies often provided that. One of the important aspects of the experience for our young women is actually being there, walking down the halls of a corporate headquarters, walking around for three weeks with these cool engineers at an AI startup company. These are real-live experiences that are transformative for our young women, because they don’t normally get access to those corridors and those people.”
– Judith Spitz, founder & executive director, Break Through Tech

“As a country, we need to fill this gap of hundreds of thousands (of qualified tech workers). It’s completely unbelievable how small the number of people we’re producing overall, and then especially when it comes to underrepresented minorities. And some of the biggest reasons behind that is the massive attrition that we see. A lot of students are being encouraged by great programs, and they’re inspired to pursue computer science, and then when they get into freshmen and sophomore year, they enter into a system that wasn’t designed for them, that’s actually more designed to filter them out where 70%, 80% of these underrepresented minority students are dropping out freshmen, sophomore year, and not making it through. So there is one big element of this, a very leaky pipeline filtering students out.”
– Michael Ellison, founder & CEO, CodePath

All of these are real problems in a very challenging time.

What’s encouraging is the large number of solutions we’ve come across. And we believe it’s important get those solutions out there to as many people as possible.

Throughout this series—Expanding Opportunities in Tech: Creating a More Diverse & Inclusive Workforce—we will be sharing many of them with you.

Next Friday, our Work in Progress podcast brings you a conversation with Michael Ellison of CodePath and with one of the graduates of the CodePath program—and now CodePath Guru—German Flores Aguilar.