Is it too much to ask for students to be able to get the education they need to get a good-paying job at a reasonable price? No, says the Obama Administration who is cracking down on schools whose career-training programs are underperforming and overcharging students.

In numbers released by the Department of Education Monday, about one in four career-training programs at U.S. colleges is at risk of losing federal funding because they are saddling students with potentially unmanageable debt. The schools range from the defunct ITT Technical Institute to Harvard University.

Under the Administration’s new gainful employment regulations, if schools fall in what the Education Department refers to as a “zone” rate for four straight years, their programs would be ineligible for federal funding. The goal of policing this sector is to get these schools to either lower their prices or eliminate poorly performing vocational programs.

This first-of-its-kind evaluation is just one of the ways the Administration is trying to tackle the student loan debt crisis Americans are facing right now. According to the latest numbers, student loan debt is at a staggering $1.4 trillion, and growing $2,726 every second. 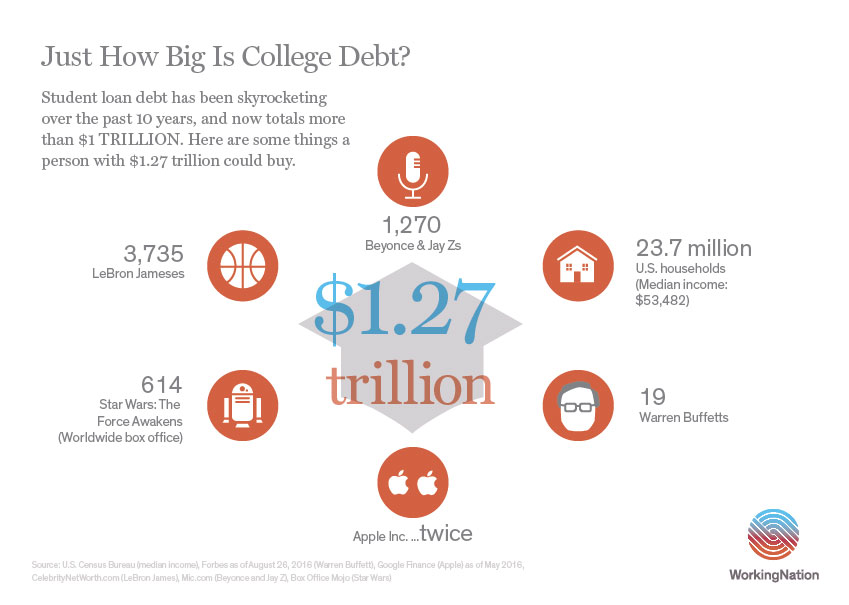 “When a student makes a personal and financial decision to attend college, the student must feel confident that it is a sound investment in his or her future, not a liability that will further defer his or her dreams,” Education Secretary John B. King Jr. told Bloomberg Monday.

For decades, attending college has been touted as the best path to getting a good-paying job in your career field, but as the changing economy is showing us a traditional college education is no longer necessary. WorkingNation has highlighted some programs like Generation, Year Up, and College for Social Innovation that are working to give young people the hands-on skills they need to achieve success on a professional level. You can read more on these programs here.

The path to success in America’s workforce doesn’t have to come saddled with tens of thousands of student debt, and changing the model of traditional college institutions is an uphill battle that may not be popular but is necessary to stay competitive and flourish in this new global economy.