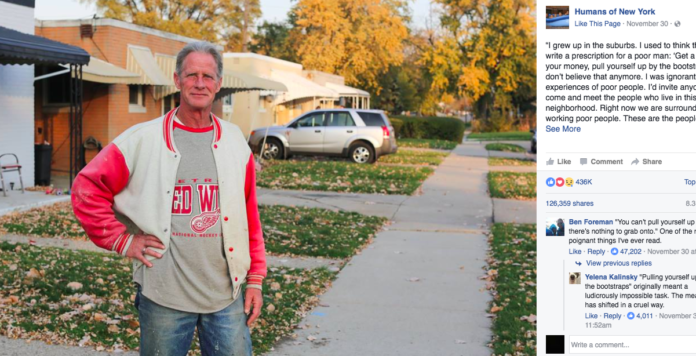 A recent subject of the Humans of New York photography project said something very poignant about the people in his neighborhood who are among the working poor living paycheck to paycheck that we wanted to share.

While the identity of the man and where he lives exactly (though his Detroit Red Wings shirt gives us a hint as to what city he resides) are not known, his message is relevant to millions of Americans who are struggling to make ends meet.

“I used to think that I could write a prescription for a poor man: ‘Get a job, save your money, pull yourself up by the bootstraps.’ I don’t believe that anymore. I was ignorant to the experiences of poor people. […] When you’re down here, the system will continue to kick dirt in your face. You can’t pull yourself up when there’s nothing to grab onto. We aren’t paying our brothers and sisters enough to live. We want them to serve us, but we aren’t serving them.”

There will always be entry-level jobs that will need to be filled and while there is a persuasive argument that these jobs should pay enough to meet the standards of a living wage, there is also the argument that these jobs are not meant to be ones that provide a living wage for long-term employment, but as a way to help develop the skills needed to move on to a better job.

The security of entry-level jobs is also coming into question as of late because more and more companies are beginning to take notice of and see the benefits of automation as a cheaper labor alternative. McDonald’s is beginning to add kiosks to restaurants where customers can customize their order. Receptionists and customer service representatives are being replaced with AI technology. Factory workers are seeing their jobs being given to robots.

So, should wages be increased to meet the rise of inflation? Yes. But is it going to be enough? Probably not.

The best way to ensure your success in the workforce of the future is to educate yourself. Educate yourself on the new demands of the workforce, read the news, follow industries you are interested in or currently work in, and figure out what you need to learn to move ahead.

We invite you to read the thoughts of Humans of New York subject below, and join the conversation on our Facebook page.

COVID will change our cities and that will create jobs