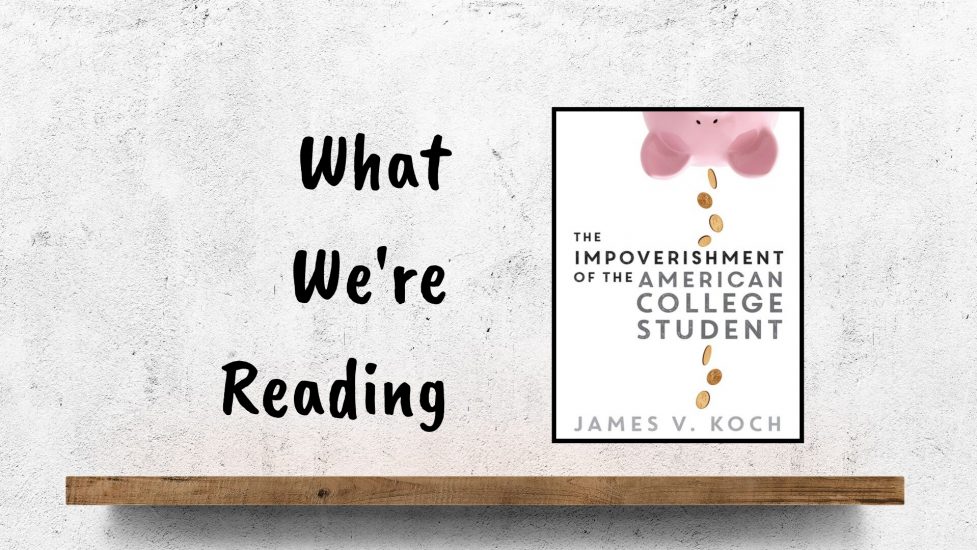 “It is time to admit that ‘Houston, we have a problem.’”

Most of us know that higher education — long considered an economic equalizer — has become increasingly less affordable for students and their families, who more and more must shoulder the cost and, ultimately, the debt. Beyond this, the return on investment from a college education can be something quite hard to measure before choosing whether or not to pursue a higher degree or even when picking a discipline in which to major.

While most discussions primarily focus on concepts like financial aid, student household incomes, and choosing a major that leads to promising jobs, what is often missed in the conversation about what we can actually do to fix the higher education problem is that there is no one solution because the issues are complex and the conditions of institutions and students are incredibly diverse.

James V. Koch’s 2019 book, The Impoverishment of the American College Student, looks at the state of American higher education, focusing specifically on four-year public colleges and universities. He tries to explain the nuanced issues deeply ingrained in the system as a whole. While the book offers valuable insight into the economics behind a school’s decision-making, tuition and fees, loans, admittance, and financial aid, Koch insists that “those who read this book hoping to discover a single magic solution for our nation’s higher education affordability crisis will be disappointed.”

I took this message from the preface sincerely, and yet by the end of the book, I found I truly was disappointed. I appreciated the analysis of the issues at hand but found myself wanting something more — something beyond the idea that the system is simply broken and inaccessible for so many Americans.

“One of the distinctive things about student debt is that in recent years it has been increasing much more rapidly than other kinds of household debt.”

The book is straightforward: “if we fail to provide promising individuals with affordable paths to the mobility and success that flow from higher education, then we should anticipate adverse outcomes as a consequence, including stagnant economic growth and crippling social divisions.”

As part of Koch’s straightforward, no bullshit approach, he reminds us through the extensive use of data that the economic mobility of Americans seeking higher education is declining and that the effects of the systemic problems reach beyond graduates, infiltrating communities and the nation as a whole. What I found, however, was that rather than explaining things in a way that continued to build, Koch’s insistence on being straightforward made me feel as though I could have understood the entire message had I just read the first few chapters.

And that’s not to say the points he makes aren’t valid and critical observations we should all be aware of. While his data-centric analysis of Pell Grants, cross-subsidies, state funding, tuition and fee pricing, and the Consumer Price Index certainly made me feel informed, it also left me wishing that his commentary made the immense use of numbers and complexities feel tangible.

Following along took a lot of focus, not because the book jumps around or is nonlinear, but rather because it is riddled with numbers I knew to be important yet Koch used them repetitively in a way that made me wonder if I had already read them or if there was some tiny difference in the data that I was missing. That being said, the book is worth a read if you’re a financial data nerd.

For me, a very valuable take away was the notion that even though those in the position to make institutional or policy changes — members of governing boards, college presidents and faculty — might be aware of the deep-rooted issues of unequal access and financial aid, they fail to prioritize fixing them and focus instead on rankings, reputation, faculty research dollars, impressive non-academic amenities, or even sports.

“…59 percent of adults now believe that ‘colleges care mainly about the bottom line’ rather than educating students and benefitting society.”

As Koch explains, the major flaw is that “with their strong concern for enhanced rankings and status, some public universities implicitly give short shrift to the idea that they have critical roles to play in assuring that the economic conditions of one’s birth do not set in stone one’s later life.” In fact, Koch shows how most public higher education institutions actually “operate well below their productive capacities.” Koch even cites Cornell economist Ron Ehrenberg’s statement that these institutions are monsters that “seek out all the resources that they can get their hands on and then devour them.”

Despite the fact that the book sets out to demonstrate where the shortcomings are in the American higher education system, Koch simultaneously argues that it is “almost a fool’s errand” to talk about changes across all of public higher education and there is “no need to flog the higher-education-quality argument to death.”

This message, along with the rest of the book, left me feeling like I really understood the problems but really didn’t know how realistic it would be to fix them. And, to be honest, after reading all the complexities and endless masses of data, the solution side was something I realized I was looking for.

Eve Bilger is WorkingNation’s Research Associate. She graduated from the University of Pennsylvania with a B.A. in English with a specific emphasis on creative writing. She is WorkingNation’s most voracious reader of books about the future of work. Read more from her series here.