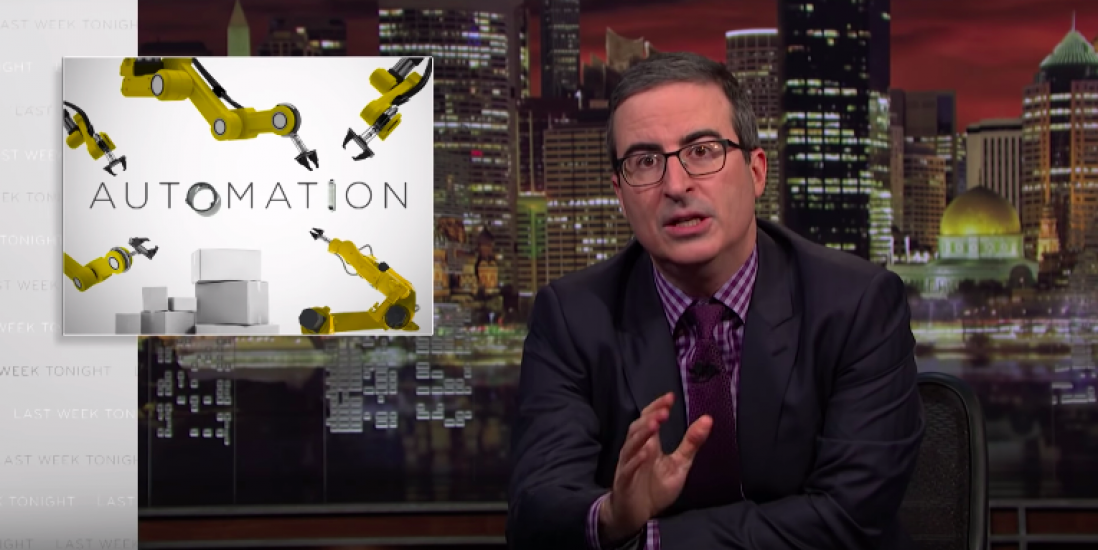 Want to be a policeman when you grow up? A firefighter? A drummer? A basketball player? Well, sorry kids, your dream job now may not exist by the time you grow up. And if it does, it may just be one of many you’ll have during your adult life. And that, in part, is due to automation, the main story of John Oliver’s latest episode of Last Week Tonight.

Automation often seems like a scary new problem, but it’s neither entirely scary nor entirely new.Connect with Last Week Tonight online…Subscribe to the La…

Robots are coming for your jobs. It’s the headline splashed across various news articles and studies, many of which we’ve even shared here at WorkingNation. The idea was thrust into the spotlight after a 2013 Oxford University study said about 50 percent of jobs are at-risk to automation. But as Oliver explains, while this idea may seem like a relatively new problem with apocalyptic implications, it is not entirely new or entirely scary.

“From the Industrial Revolution through the rise of mass production, automation has transformed our society in ways people have marveled at,” Oliver says as he kicks to a 1942 video called The Industrial Revolution where the narrator explains how the popularity of “mechanical slaves” — or as us normal people call them “machines” — resulted in the average American man at the time having at least 20 at his beck and call.

They’ve made goods cheaper, jobs easier and sometimes safer. For employers, machines increase productivity and maximize profits. But for displaced workers, it has caused immense pain throughout history. And with advances in A.I. and robotics, there are concerns that job loss could accelerate.

And while that may be, it’s complicated because, as Oliver explains, a job automated is not necessary a job lost.

“Frequently, machines don’t replace jobs so much as tasks,” Oliver says. A good example of which, he cites, is ATMs. When they became common in the 1980s, bank tellers were afraid they were going to steal their jobs. But the profession actually increased over the next 30 years as their jobs changed from dispensing cash to sales and other tasks. “Their jobs didn’t go, they changed.”

And if workers do lose their jobs due to automation, we have no idea what jobs will be created in their place. “Fifty years from now, people will be doing jobs that we can’t imagine, like crypto baker or snail rehydrator, or investment harpist,” Oliver jokes.

So we get rid of some jobs, but we get new ones to replace them. Even Steven, right? Not necessarily, Oliver argues, because the new jobs won’t necessarily pay the same as the ones it takes away, and it might not be easy for displaced workers to transition into them. Take the 3.5 million truck drivers at risk of losing their jobs to self-driving vehicles. In an ideal world, they could simply move into a profession in the exploding tech sector. But with the average age of drivers 55 years old, and many lacking a high school degree, it won’t be that easy.

So what can we do? There are plenty of things such as funding retraining efforts tailored to jobs available in one’s area, a wage insurance program for older workers who are displaced and have to take jobs with lower salaries, or an expanded Earned Income Tax Credit.

In the meantime, Oliver offers, “we need to start preparing younger workers for the job market they’re about to enter because the pace of technological change is so rapid, some experts suggest we need to start rethinking our basic conception of a career.”

That means instead of asking kids what they want to be when they grow up, we should be asking, what five things do you want to be when you grow up? And it better be something that requires social intelligence, complex critical thinking, and creative problem solving if you don’t want to be replaced by a robot.

A part of the solution

The impact of technological advancements on the workforce dating back millions of years is the topic we chronicled in our animated short, Slope of the Curve, back in 2016.

And while, as Oliver reiterates, we don’t know exactly how workers will be impacted in this Fourth Industrial Revolution, we do know they are going to face difficult transitions. Our mission at WorkingNation is to amplify the conversation surrounding this displacement and the solutions available to people so they can take control of their future. And Oliver’s piece falls right in line with that mission.