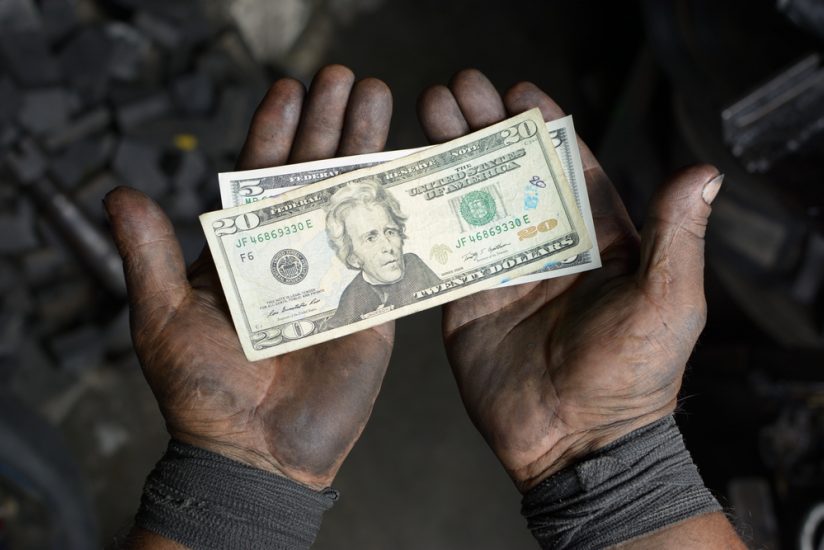 If the unemployment rate is so low, why aren’t wages going up?

The U.S. labor market generally works on the law of supply and demand. When the unemployment rate is low and businesses are hiring, employers typically hike wages to attract the workers needed to fill their open jobs.

Even with the jobless rate at 3.9 percent in July, and more than 6.6 million job openings, wages are increasing at a relatively slow pace at just 2.7 percent over the past 12 months. That’s not even enough to keep up with inflation, which was at 2.9 percent in June.

So, why aren’t businesses paying more to get the skilled workers they say they need right now? I turned to two economists, one on the East Coast — William Rodgers, chief economist for the Heidrich Center for Workforce Development at Rutgers University — and one on the West Coast — Chris Thornberg, founder of Beacon Economics in Los Angeles — for some answers.

Rodgers says there are definitely jobs that are going unfilled because employers can’t find the workers they want with the right skills. Historically, he says, you would expect to see wage growth to be above-average because of the skills gap, but the talent shortage isn’t having much of an effect yet on overall wages because there is still some slack in the workforce. There are millions of Americans out of work, working part-time but wanting full-time work or out of the labor pool altogether.

He points to pockets of the country where the jobless rate remains between 5 and 6 percent, compared to the national average of 4 percent.

“The demand for workers doesn’t seem to have been as strong in these middle-range urban areas. The need for workers isn’t even strong enough to induce employers to move people from being part-time to full-time,” says Rodgers.

The net effect is that in these areas there are more job seekers than jobs. Employers don’t have an incentive to raise wages to find the people to fill vacancies.

“Wage growth has not been as strong as it has been in the past, because it’s a tight economy,” says Rodgers. “We haven’t seen the high participation rates that we saw in the late 1990s, during the previous economic boom. Over 22 million jobs were created. And what it did was, it really drew in people who had left the labor force.”

Thornberg believes the workforce problem is that we’re in the midst of a labor shortage due to a large number of baby boomers retiring.

“The boomers all came from families with seven, eight kids, and boomers all had like 1.5 kids. While millennials are the biggest generation ever, they’re only about 2% larger than the boomers. 2%, that’s it,” says Thornberg. “So, now you have a situation where every time a boomer retires, there’s basically just 1.1 millennials coming into the labor force.”

There are not enough workers to go around and “there’s no doubt that the people who are left on the outside looking in are those who are least skilled. So, when you do think of the pool of available people out there, there are two problems with it: A, it’s small, and B, it is made up of people who are truly low-skilled,” according to Thornberg.

Low skills generally translate to low pay. Employers don’t need to raise wages to entice workers into jobs. Having an unskilled workforce may keep payrolls low, but it also creates a problem for businesses that want to fill some jobs and want to grow.

“Six years ago, this was a great labor market for employers. There were lots of people out there. The unemployment rate was high, which meant it was relatively easy to sit back and just let qualified people walk in your door, but that labor market doesn’t exist now,” explains Thornberg. “Now we live in a different world. Now we live in a time period where if you want to have good people, you’re going to have to train them.”

“Training people is not cheap. It means they’re not gonna be terribly productive for a while. It’s actually a fantastic opportunity for a lot of those unskilled people because they’ll have the opportunity to get jobs where the jobs will provide them with training that will help them in the short run, but also help them in the long run,” Thornberg says.

Rodgers agrees that training will not be cheap. Employers in need of good workers will have to respond and start raising wages to compete for these newly-skilled workers.

“Someone who’s sitting on the sidelines is now saying ‘Whoa. That wage is now being increased, and the prospects for that job also look good’, in terms of getting in and being there for some time. And that’s what’s going to induce more people to move into the labor force,” says Rodgers.

Editor’s Note: This article was updated on August 3 to reflect the BLS jobs report numbers for July.

Join the Conversation: What do you think will happen first? Will employers start training entry-level workers for skilled jobs or will they raise wages? Have your say on our Facebook page.