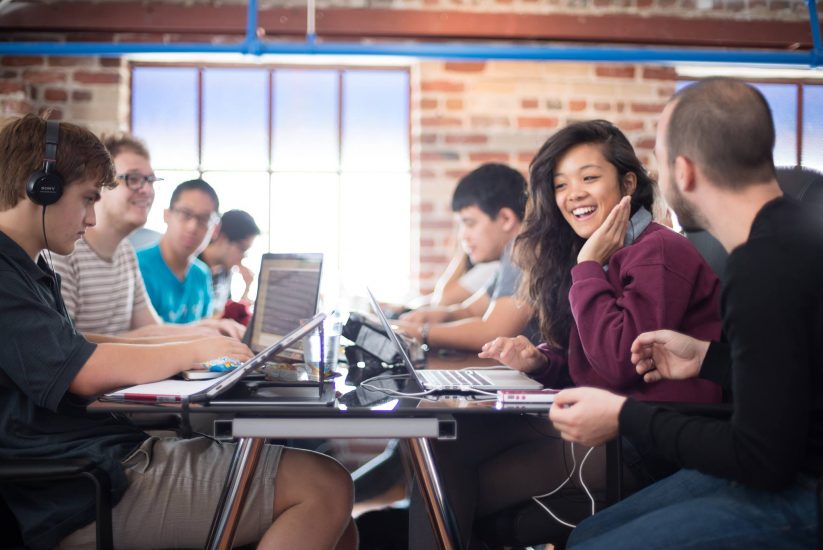 The reputation of the traditional college education has taken a hit lately with mounting student debt and growing unemployment or underemployment for college graduates.

There are 44.7 million Americans with student loan debt, according to the U.S. Federal Reserve. The University of Washington reports 53 percent of college graduates are underemployed or working in a job that doesn’t require a bachelor’s degree.

It also found it takes the average college graduate three to six months to secure employment after graduation. That combination puts an incredible amount of financial pressure on recent college graduates.

Make School is an accredited computer science college in the heart of downtown San Francisco. It offers a unique project-based learning experience and an income share agreement (ISA) that makes tuition payable only after students graduate and start earning more than $60,000 annually.

Its ethos is focused around increasing the pipeline of diverse tech talent, and it requires no standardized tests in the admissions process, as part of its efforts to attract a diverse group of students.

Half of its student population are people of color and Make School graduates are competing with Stanford and MIT grads for jobs at places like Tesla, Lyft, and Facebook. According to Make School, its alumni enter the tech industry with an average starting salary of $100,000.

The evolution of an education revolution

Make School is actually the evolution of what started as an alternative to college, according to co-founder Jeremy Rossmann. He tells WorkingNation it began in 2014 as a two-year program with no degree that was designed to help students get jobs with tech companies.

But after a time, the founders wanted to see if their program could exist as a college offering a bachelor’s degree.

Make School partnered with Dominican University of California in San Rafael, and in 2018 was approved to relaunch as an accredited college.

There’s a structural incentive to focus only on student success, Rossmann says, “because at the end of the day if the students don’t get paid, we don’t get paid.”

He describes the culture as one of “feedback and iteration” where student and industry input is sought, and content and curriculum is constantly updated to “better serve our students and better match industry needs.”

The school’s goal is to instill a “maker mentality” in its students by emphasizing character development and creative problem solving, as well as hands-on computational learning.

“We have students who apply that mentality to their passion for medicine or for nonprofit work or for civic engagement and so on and so forth. But the maker mentality is looking at things and seeing opportunities to fix, to create, to address problems and to have the practice and the know-how to actually go ahead and build things to address that.”

Rossmann calls it a different cultural approach than can be found in most undergraduate computer science programs.

“The culture of the school is very much about building that portfolio by building things that are actually meaningful and making an impact while you’re studying. So to be able to point to some actual problems that you solve for a real audience or a real organization that you were able to really do as part of your studies, and not as something that you do, you know, you’re into your first job when you finally launched that first product you’re working on. It’s something that you could do in your first semester with us.”

Well-rounded graduates are vital in today’s tech workplace which is why Make School focuses on offering a broad-based education.

“When you can talk to those employers, they don’t want single focus, one dimensional, uncommunicative, programming drones. That’s not what they’re looking for. And so, whether it’s because we truly believe in it, which we do, or whether we trust industry feedback, which we do, all roads point to having multiple roads to the education that go far beyond just computer science.”

“We want to ensure that our students have professional skills,” Rossmann says. “When you’re a software engineer in 2020, you are talking to people more than you’re talking to computers. Every single meaningful software project is being built as a team effort. And it’s a team, not just of programmers, but of other disciplines on the design side, on the business side, and the sales side. And so being able to engage professionally and productively with other humans is actually a huge part of getting a tech job.”

“We find that our students who are excellent and professional communicators and collaborators out-compete the students who are purely technical whizzes when it comes to seeking jobs,” he adds.

Make School – The Future of Higher Education from Make School on Vimeo.

Along with its academic model, financing an education at Make School is one of the things that makes it unique. There are three primary drivers that led Make School to offer both partial and full income share agreements, according to Rossmann.

“The first thing about the ISA that is really powerful is it has a built-in insurance policy. You’re not making more than 60k a year for any reason, you do not pay. And we believe strongly in that really any form of student financing should have an insurance policy where the risk is ultimately born by the school and not by the student.”

“The second thing that it does is it ties our success to student success, which has very strong cultural effects given that the vast majority of our students take this deal. It really has a focusing effect on the culture of the school and ensuring that everybody is prioritizing student success and student happiness and student outcomes above all else.”

“And the third thing that it does is it improves access to the programs. What we find is that fear of a materially adverse outcome…can have problematic implications for a student’s willingness or actual ability to take on traditional student debt. And so, to offer an option that is, essentially, if you can work in the U.S. you qualify to pay zero dollars upfront, no further questions asked, it’s not about your level of income, it is not means-tested,” according to Rossmann.

“It is the model of the school that we will not take your money upfront until you got a job. That also has a way of lowering the barrier for a lot of students, especially with lower-income backgrounds, to decide and take the plunge in committing to education like this.”

The ISA was a major factor in Ebonne Cabarrus’s decision to attend Make School. Cabarrus, 26, is a senior in Data Science and a self-described non-traditional tech student. She had no real coding experience and was working in the hospitality industry when she first heard of Make School.

“Most of the coding boot camps and things like that that I found required you to pay out of pocket $10,000 to $20,000. And coming from the type of background I came from that was just pretty much next to impossible. So, it was kind of a barrier,” she says.

“And even going to college in general was something that my family couldn’t really afford when I first got out of high school. So, the whole ISA model kind of gave me a chance to be in this space and have access to opportunities without having to worry about the financial burden of it right away.”

Academically, the school’s maker mentality approach was a big draw.

“It was just kind of talking about solving real-world problems through tech. And so that was something I was always interested in. I’m kind of like idealistic and always trying to think of how I can make the world a better place. And it kind of felt like Make School understood that and supported that. It wasn’t just about pumping out tech workers, but it was about people who kind of want to innovate and make changes in the skills and in the world.”

Cabarrus says the program is not an easy one to get through, and she’s had her share of challenges. But she cites the support of faculty and her fellow students for helping her to succeed.

“One thing I would emphasize is it really is a community, from top to bottom. You feel like people care about you. Like there are certain times where I wasn’t too sure if I could get through the program or I felt like, should I just drop out? Maybe I made a mistake. And there were just certain staff members or even my peers, which really kind of rallied behind me to support me through more difficult times,” explains Cabarrus.

“So, I just think anyone who comes into this environment should be expecting to just feel like you’re a part of a big family, I think that’s one of the things that makes Make School so special.”

Reinventing the Path to Tech Careers

Just as Make School offers an income share agreement with its students to help with tuition, programs like Akamai, Creating IT Futures, and Kenzie Academy accommodate students who want to pursue tech and continue learning in an affordable way.

Learn more in this WorkingNation video:

Is college worth the cost? A first look at ROI