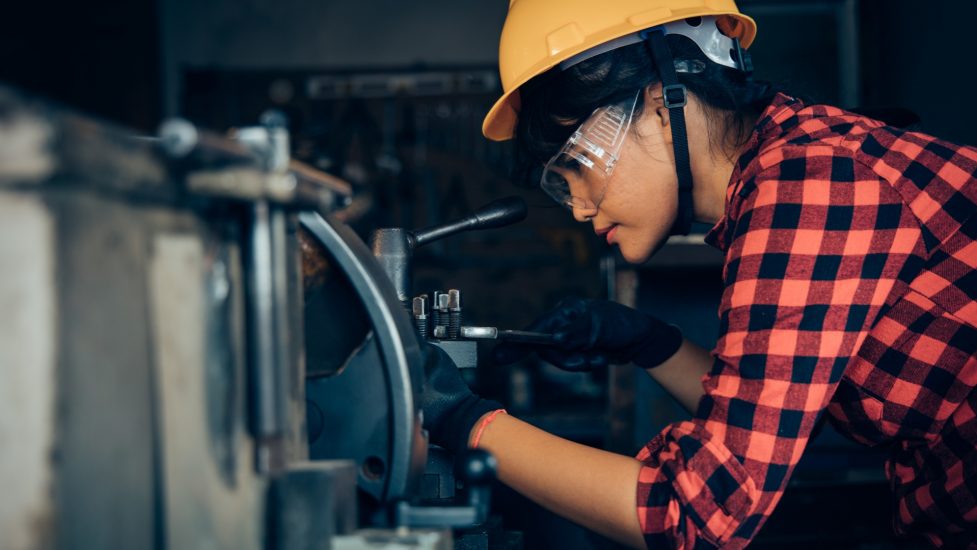 Manufacturing remains a route to a good job, yet for a smaller workforce

Manufacturing used to be the crown jewel of the American economy. Massive factories in nearly every corner of the country created goods sought worldwide. And the jobs making those items provided even the least-educated worker with enough money to realize their dreams, or at least live comfortably.

Those days, and millions of those jobs, are gone. And they’re likely never coming back at the scale at which they once existed.

But that report also says that despite its decline, manufacturing “remains an important source of economic opportunity” and “a good route to jobs for a smaller, more skilled workforce.”

Upskilling – the future of manufacturing 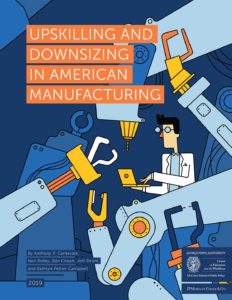 “Manufacturing is in a state of flux. Meaning that we mistook the global shock that impacted manufacturing between say about 1979 to about 2000 as the death of manufacturing, where in fact manufacturing both as a global phenomenon and as a U.S. value creation hasn’t died. It’s either stayed stable or has grown as a function of the size of the economy,” according to Dr. Jeff Strohl, the Center’s director of research and a co-author of the report.

Strohl cites automation and changes in business practices as having unsettled the manufacturing industry, shrinking the demand for workers to about 70 percent of what was needed 20 years ago. That’s created a barrier to entry-level jobs for less-educated workers.

“Today, modernized manufacturing is making a new investment in a new type of manufacturing that relies an awful lot on automation, robotics, computer-assisted design and manufacturing,” Strohl adds. “Workers will have to keep abreast of changes in the actual programming languages that enable them to control and keep up with the machinery.”

According to Strohl, “That will require some type of continual updating either through on-the-job training, or as we see in the U.S. model, a lot more reliance on third-party certifications, which enable the employee to go out and get bite-sized pieces of education and training that will help them keep up with changes, small changes, in the labor market in these sort of technologies.”

Even though manufacturing isn’t the major force that it once was in the U.S. economy, the report says that it’s still a good source of jobs for less-educated workers, providing more good jobs for workers without a bachelor’s degree in 35 states. Good jobs are defined as minimum earnings of $35,000 for workers age 25–44, and $45,000 for workers age 45 and older.

“There is a group of workers who were employed in manufacturing when the change began to happen and they were able to move with the punches and maintain their employment. So, they have the benefit of in-place experiential learning. There’s a real value to the person who knows the plant and knows the machines,” he says. “I think there is a source of good jobs in manufacturing that reflects an incumbent worker base who can maybe move between existing firms. A lot of the movement, if we look at where manufacturing has gone, it hasn’t jumped from high school dropout to Ph.D. It’s moved up a little bit.”

“So, if we look at manufacturing, the shift upward on the three pathways looked at a longstanding foundation in manufacturing that still provides stock of employment to workers with high school has shifted to the middle, so that middle skills are where the growth is if you look in manufacturing. The B.A. side of things really reflects the extreme side of upskilling. I think that that’s really going to get into the design and really heavy-duty computerized manufacturing design component.”

Strohl uses the automotive industry as an example. “Detroit reflects this type of upskilling on the B.A. side of the market, which is the entire infrastructure for automotive manufacturing existed in the Detroit area. And then you pulled out the automotive plants. But what was left was all of the design, marketing, et cetera, components, finance. A big portion of G.M.’s business model these days is not actually creating a car, but it’s creating the financing to enable people to buy a car. And all of those types of work require more advanced degrees. You are normally a BA as a start point.”

The future of manufacturing jobs

So, what does the future hold for manufacturing jobs? The report projects that manufacturing employment is expected to decrease by 253,200 jobs over the next decade. Workers with a high school diploma or less, and workers with bachelor’s degrees, will bear the brunt of those losses. “However, workers with middle skills, who often fill more demanding blue-collar and supervisory positions, are expected to gain about 300,000 new jobs by 2027.”

Strohl says the industry needs to stop looking backward to better embrace the future of manufacturing.

“You know, we have in the American psyche a looking in the rear-view mirror type of perspective. And what that is doing, in my mind, is coloring how it is we see what new manufacturing is. And sometimes because of that older vision, we’re not letting ourselves see what new manufacturing is, and in doing so we’re not necessarily creating industrial policy that is as effective as it could be.”

Strohl believes manufacturing will become more automated as it modernizes but that the technology will be complementary to human labor, not replace it entirely.

“It’s not really, fully, a substitute the way people fear. It is substituting on low-skilled labor, yes, there’s no doubt about that. But it also has a very strong complement, meaning you need people. A lot of the changes in how we do business in the business model that requires interwoven business services to get a good to market have really made the production to market process much more complicated and layered.”

“And in this kind of model, you see that around 1940, you’ve got like 10 farmers and two wholesalers to get goods to market. Now you have one farmer, two lawyers, ten wholesalers and eight retailers to get the product to market. That type of model and the change in how we do business has spread everywhere.”