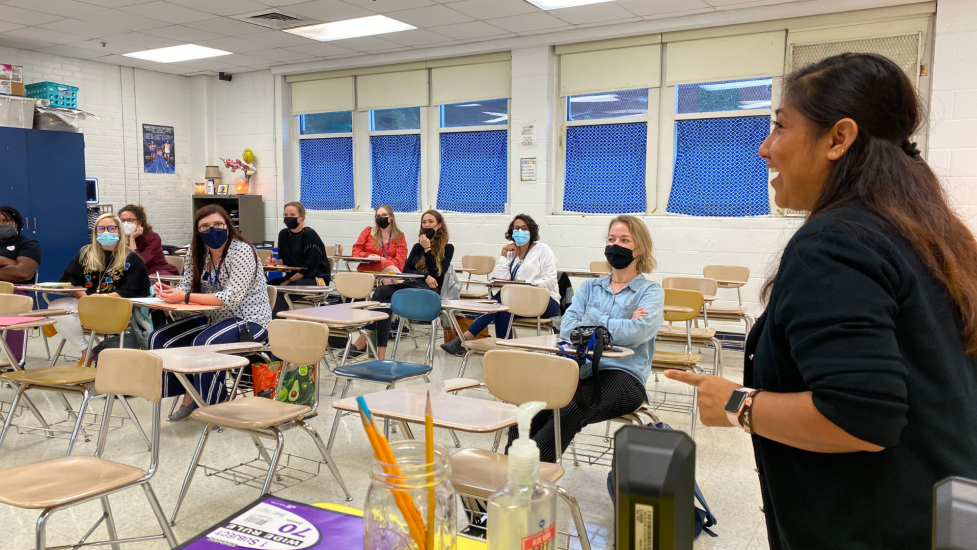 Nashville is a city with a growing Spanish-speaking population, but not enough English speakers who are bilingual. A year-old program in the Tennessee capital is working to close that gap.

According to the U.S. Census Bureau, almost 83% of the households in Davidson County, which includes Nashville, speak only English and the Hispanic or Latino population of the county is more than 10%, growing significantly over the past decade.

“It really started growing in the ’90s, mostly with immigrants from Mexico. In the past decade or so there’s been a boom of Central American immigrants, particularly from Honduras, Guatemala, and El Salvador,” explains Blank.

A need for Spanish language skills led Blank – a former public school teacher – to co-found Voces de Nashville. She explains that the mission is two-fold. “One, it’s to teach Spanish to English speakers in Nashville with the hopes of creating a more bilingual city that’s, therefore, more accessible for people who speak Spanish.”

“The other mission is to allow Latina women to develop skills in the area of teaching which they may not have had access to due to different legal barriers or barriers to access in their home countries.”

Blank continues, “A lot of our teachers are women who may have been professionals in teaching in their home country. Then a lot of women come from backgrounds, cleaning houses, construction, that require a lot of the body.”

Pathway to Teaching for Local Latinas

The teacher training runs for six weeks, meeting six-to-seven hours per week. Blank says the teachers learn about creating a safe classroom environment, how to get know their students, and understanding barriers to adult learning.

She continues, “What is the process of learning the language? What are the steps? How does that look? Then [the teachers] learn how to lesson plan using our curriculum which is still being developed. Our teachers are helping with that based on what they’re seeing from their students.”

Blank notes the teachers gain a lot of knowledge by being in the classroom, “The way to learn teaching is just to teach.”

Beatriz Ordáz Ramírez is the organization’s co-founder and chair of membership development. She does teacher recruiting, onboarding, offers general support to members and also teaches herself.

Speaking in Spanish, Ordáz Ramírez – who is originally from Mexico – says recognizing that the teachers are from a number of countries is important.

“They’re native speakers. And that’s intentional because a lot of teachers are not native Spanish speakers in our school systems. Getting the accent right is really important. That’s a big part of the language to be able to understand someone. And then the culture that comes with a native speaker – that’s really important to us.”

Who are the Students?

Since the program launch last fall, the organization has worked with about 110 students.

Blank explains that students have primarily been people from the nonprofit sector who provide direct service to the Latino community, as well as teachers and school leaders in the public school system, and construction and health care personnel.

Classes have varied from six to nine weeks, meeting once or twice a week. Upon completion, students are encouraged to continue with the course but, regardless, Blank says feedback indicates that participants feel much more confident about their Spanish language skills when the class is over.

A Stake in the Organization

Voces de Nashville is a member-managed limited liability company. Blank explains, “It’s not only shared ownership in the sense of property, but also shared ownership of decision making. We function almost like a board in the way that we make decisions. Our bylaws are our operating agreement. For things over a certain amount of money, we take a vote. To call a meeting, we have to take a vote and it has to be done in a certain way.”

“We’re member-owned because no one is receiving wages. They’re receiving dividends for any sweat equity that they put in. No one in the organization has to take on the responsibility of being an employer or an employee,” explains Blank.

Before wrapping the conversation with WorkingNation, Ordáz Ramírez makes sure Blank is given credit for the organization. She notes, “Blank has a big heart and even though Spanish is not her first language, she has made a lot of effort.”

“This is such an amazing mission especially coming from the value of community. Our name is Voces de Nashville and we’re united through sharing our voices with each other,” says Ordáz Ramírez.