Financial advisor and management consultant Christopher Mackin acknowledges that demographic change, globalization and the accelerating digitization of just about everything will bring profound changes to the American workforce. But rather than envisioning a dystopian future, he looks to America’s past to find new ways working people can save capitalism from itself.

Mackin is neither a revolutionary nor a naive optimist (but he is optimistic). Co-founder of Ownership Associates (OA) and partner at American Working Capital (AWC), he’s been a leader in the worker ownership movement for 40 years. He is teaching a course this semester at Rutgers University’s School of Management and Labor Relations on “Employee Ownership and Group Incentives.” And he advises clients on how Employee Stock Ownership Programs (ESOPs) can allow employees to take ownership of the businesses where they work. Making use of their access to pools of equity and debt capital, Mackin and his partners have facilitated hundreds of successful management/employee-led buyouts and recapitalization assignments across the U.S.

Buying Windmills, Not Tilting at Them

Economists disagree on precise figures, but something like $10.4 trillion in business assets will change hands over the next decade as Baby Boomers business owners retire. Those who sell ownership to their employees enjoy tax benefits, preserve their legacies and help sustain local communities.

“Thousands of baby boomers own businesses that they will soon want to exit,” Mackin says. “If the resources are there—and they partly are—to persuade owners to ‘sell internally’ to their workers, those boomers will do more to attack income and wealth inequality than they could ever do acting as independent philanthropists.”

It’s a compelling, non-partisan proposition: Departing owners get on with retirement, businesses survive in place and employees are incentivized to keep to pay down their debt by running profitable businesses. Departing owners get market value for their assets, while ESOPs enable workers to save their own jobs. Wealth is not so much redistributed as it is “predistributed” by virtue of how these transactions are structured. As debt is paid down and profits are earned, employee accounts grow.

Aluminum Precision Products (APP), for example, a 51-year-old manufacturer based in Santa Ana, Calif., employs over 900 people, making parts for airplanes, cars and spacecraft. In 2012, its family owners began the process of selling the company to its ethnically diverse workforce. With assistance from American Working Capital, APP is now on a path to broad-based employee ownership. Other success stories (not all of which were advised by AWC) include breweries in Colorado and Massachusetts, grocery chains in Idaho and Florida, and thousands more scattered across the U.S.

“Properly structured employee-owned firms pay out primarily at retirement,” says Mackin, noting that employee-owners enjoy about 2.5 times more retirement income than other arrangements. “The companies implementing these plans and the employees participating in them are largely cognizant about what is formally called portfolio theory. They have 401(k) plans that are diversified in the event the business they own goes south.”

It doesn’t require special insight to observe that average citizens endure wage-based, income-dependent lives. Few workers own substantial assets—real-estate, buildings, corporate stock, raw materials, patents, copyrights, intellectual property, etc.—the kinds of assets that could allow them to get by without a regular paycheck.

From the early 19th to the mid-20th century, however, workers exercised considerable political and economic influence, in the United States. As far back as the 1820s, some had begun to challenge the new employment relationship that reduced formerly independent producers and farmers to “wage-slaves,” while enriching a separate class of owner-proprietors. Reformers like Thomas Skidmore envisioned an alternative “industrial republic” of democratic firms that would mirror the political republic fought for and won by their parents and grandparents.

The idea of employee ownership draws on and revivifies that history, endorsing basic values such as liberty, accountability, collaboration and productivity. It echoes the efforts of ex-farmers and craftspeople who rallied to the calls of organizations such as the Knights of Labor for an economy built on democratic firms, industrial cooperatives and shared prosperity.

Modern expressions of those concepts harken back to a usable past that is less opposed to capitalism than optimized to ensure its profits are widely shared. Matching efficiency and productivity with democratic values and the benefits of ownership, ESOPs and employee-led cooperatives offer an unusually resilient economic vision that draws support from across the political spectrum. Dana Rohrabacher, one of the most conservative members of Congress, finds common cause on this issue with progressive Sen. Bernie Sanders.

The concept has fans even among the hard-charging disruptors leading the contemporary gig economy. Juno, a NYC-based ride-sharing platform that is taking aim at sector leaders Uber and Lyft, seeks competitive advantage in, among other things, giving drivers opportunities to share ownership.

“It doesn’t just mean that we’re nice, although I think we are,” Juno manager, Lucas Smith told workers in August, “but that it’s also good business.”

Like everyone in the personal-transportation sector, Juno’s founders and drivers are distracted by the prospect of driverless cars taking the wheel and kicking them to the curb. If Juno succeeds in the meantime, its soon-to-be displaced driver-owners might at least be part-owners of the robots that make their jobs redundant.

“With the proceeds from that ownership,” Mackin speculates, “they can move on to the next technological challenge that has not yet been automated.” 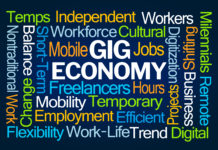 For many, the future of work will be temporary 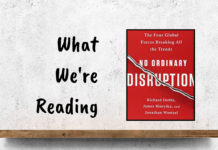 “Our intuition about how the world works could well be wrong” 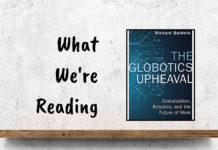 Why Ohio Communities Are Betting Big on Transforming Higher Education

Five books on the future of work a drone may soon...