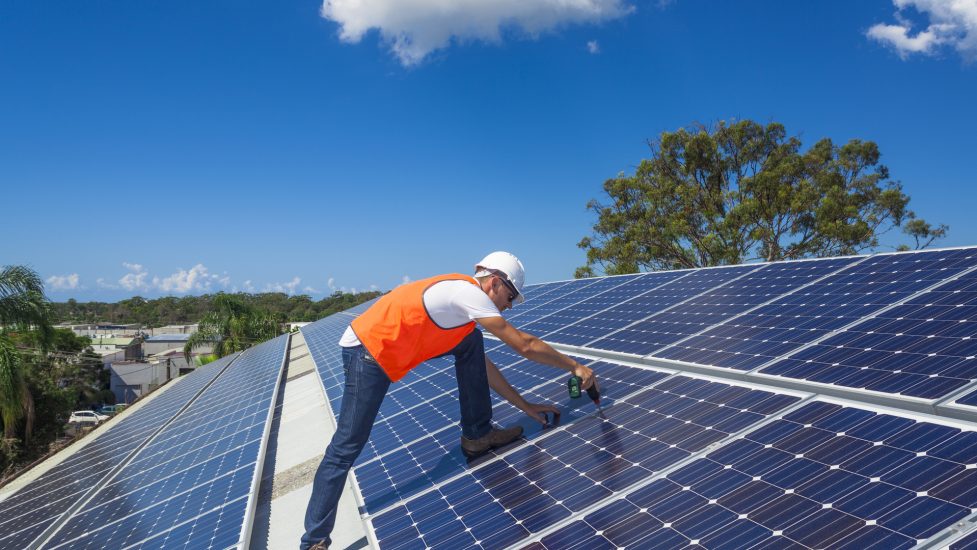 People of color and women remain underrepresented in green jobs

Despite recent losses during the pandemic, green jobs are expected to grow quickly over the next decade. But one question is whether efforts to diversify clean energy employment will keep pace.

Right now, workers holding these positions tend to skew white, older, and male. And a wave of projected retirements and replacements looms, as it does in other areas of infrastructure.

This will lead to replacement needs across the entire spectrum of green energy jobs, according to Joseph Kane, a Senior Research Associate and Associate Fellow with the Brookings Institution. This opens the door to a more diverse talent pool.

“Entry-level workers, mid-career workers, managers, really the full pipeline, if you will. That challenge directly, I think, translates to an opportunity, ‘says Kane. “Many of these positions require relevant on-the-job training and related work experience, but they tend to have lower formal educational barriers to entry. They can pay more competitive and equitable wages, particularly to those workers who are just starting their careers.”

As an example, Brookings research shows nearly two-thirds of solar installers have a high school diploma or less. Despite this, they have a mean hourly wage of $22.50, which is close to the national hourly mean of $25.72.

But Kane tells WorkingNation that despite the relatively easy entry and strong wages, people of color and women are still underrepresented.

“We saw under-representation, racially speaking, among Black workers, Asian workers—less so actually in terms of Hispanic workers, because many of those individuals tend to be employed in construction-related activities. But then there are challenges in Black, Hispanic, and Asian workers filling higher-level positions across the board. Those include a lot of managerial and more technical roles,” he says.

How Do We Increase Diversity?

So, how do you get more underrepresented people into the green jobs that exist?

Kane says the answer is through earn-and-learn models and work-based learning opportunities, not just traditional apprenticeships, but through pre-apprenticeships, bridge programs, including internships. Mentorships are also important.

“You can imagine students going as far back as middle school or even elementary school having exposure to what these careers are so that they can take the courses, they can get the experiences that can lead them in that direction. I think the bottom line is just a lack of visibility, a lack of awareness that, hey, these are not just jobs, but these are careers that exist.”

Both federal and state governments have roles to play in expanding diversity through these job opportunities, according to Kane. But he says immediate leadership needs to come from the local level.

Mayor Lyda Krewson calls it “an innovative way for us to make strides with the city’s ambitious climate protection goals while advancing diversity and equity in the workforce at the same time.”

The first cohort took place last fall and a second is scheduled for the spring of 2021. Local nonprofit Employment Connection coordinated the program providing participants with the opportunity to develop their soft skills before moving on to three days of training with the International Brotherhood of Electrical Workers (IBEW) union. Upon completion, they were awarded a certificate in Introduction to Solar Voltaics.

Employment Connection CEO Sal Martinez tells WorkingNation he’s excited about how the initial cohort went, noting several in the program took advantage of the opportunity to jump to the next level.

“Several of the participants, upon completion of the program, applied for the IBEW’s apprenticeship program because they were so excited about being at the IBEW and seeing individuals in the facility and at their administrative office. Others accepted paid internship experiences from StraightUp Solar, and so they will embark on that journey,” says Martinez.

He adds, “if they do a good job during that paid internship, the expectation that we have, and that StraightUp Solar has, is that they will be offered employment. In the meantime, we are also contacting other companies in the electrical business to let them know that we now have a list of individuals that they might want to consider for their workforce needs.”

According to Martinez, St. Louis recently passed legislation mandating all new construction must be able to accommodate solar panels. There also has been a renewed commitment to diversify the city’s construction workforce, for which Employment Connection will provide help. Because of this, Martinez expects green employment opportunities for underserved communities to grow.

But he says there is another component that is stoking green jobs enthusiasm.

“In addition to giving an individual an opportunity to be self-sufficient, there’s a social, environmentally conscious component to this when you understand what solar power means to the planet. And so, a lot of the participants were really wowed by that.

“They had not really taken that into account, or they just didn’t know. It’s not just a fad. It’s not just something that looks cool on a house or on a commercial facility. It is a positive contribution to the environment. And so that really excited a lot of the participants, to know that they would be in a position to do something that is environmentally responsible and is a benefit to the community.”.