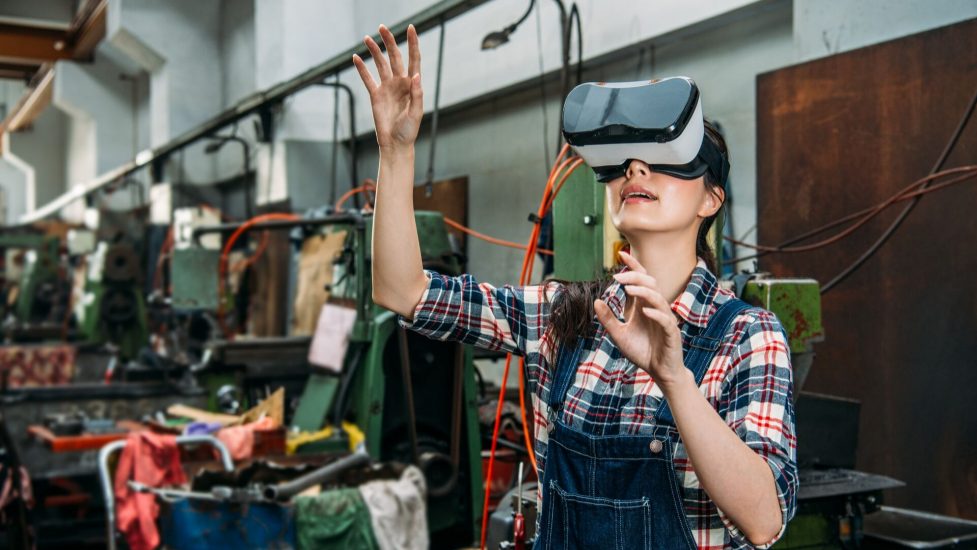 Preparing for a new reality in manufacturing

VR, AR, and MR. If you think these “Rs” are only for gaming and recreation, then consider this: virtual reality, augmented reality, and mixed reality have the potential to save manufacturers millions of dollars and hours.

For some companies, the technology is already a reality. For the majority, the reality is just a few years away. A 2018 Jabil Augmented and Virtual Reality Trends Study shows 69 percent of technology and business stakeholders expect AR and VR to become mainstream within the next five years, but only 29 percent said they had a plan on how to implement the technology.

Those companies are also working on ways to prepare their workforce for, literally, this new reality. The Association for Manufacturing Technology (AMT) has a logical approach. It’s working on training programs with career and technical institutes, community colleges, and other organizations that already teach classes using the AR/VR technology.

“We do know the speed at which education happens using AR/VR is much quicker than traditional classroom experiences and that’s enough of an impetus to change the way we teach to these new technologies,” according to Greg Jones, AMT’s vice president of Smartforce Development.

“The skills gap is not decreasing. It’s widening because of new transformative technologies that are coming down every day from new innovations and new product developments. We do see these tools being used more and more. The quickest way to educate people on how to do new jobs is through AR/VR.”

Jones says he’s seen the fast integration of AR/VR into manufacturing in the key function of field service technicians. “These are individuals who go out and install, repair and maintain equipment. Many of those folks are Baby Boomers and retiring, so to train field service techs more quickly and effectively, companies are using AR/VR on-site and on-the-job to maintain and repair things.”

Manufacturing technology equipment can be very complicated and having a visor capability, understanding what you’re looking at, and an instructional manual inside your view can help you repair that machine more quickly,” adds Jones.

These students engage with seven different technologies so they can be exposed early to manufacturing technology, and by extension, potential careers, which Jones says, are among the highest paying industries in the country.

“People in the generations coming up, they’re going to be on a lifecycle of continuous lifelong learning because technologies continue changing. What we’re seeing is AR/VR can help people stay updated more quickly,” Jones says.

Lockheed Martin was an early adopter of VR tools. The company built its Collaboration Human Immersive Lab (CHIL) back in 2010 specifically to facilitate the use of virtual reality to review engineering designs and assembly operations.

“It was an evolution of similar capability that assisted in the design and validation of the F-22 and F-35 aircraft in our Aeronautics division in the mid–2000s,” says Darin Bolthouse, Lockheed Martin’s CHIL manager.

“VR offers a great opportunity for this team to immersive themselves in a full-scale representation of a design with a focus on validating the assembly processes. Based on feedback from the technicians, who are the experts in assembling the product, the engineers are able to make changes to the design while the cost of making changes is still relatively low,” Bolthouse tells WorkingNation.

More than 1,000 Lockheed Martin employees go through the CHIL each year; more than 10,000 have gone through CHIL since 2010, in roles such as CAD designers, graphic artists, and computer programmers. Bolthouse says the company has found VR to be an effective tool for upfront design validation and optimization before a product is physically produced. He estimates VR tools save the company $10 million a year.

Other companies that are also realizing savings using a variety of “reality” tools include industrial group thyssenkrupp, which has reduced sales and manufacturing times by 400 percent using mixed reality smart glasses, Microsoft HoloLens.

Boeing’s use of smart glasses reduced wiring production time in its 747-8 Freighter by 25 percent. Error rates dropped to zero. The large scale implementation of this technology throughout industries in general — not just in manufacturing — is expected: augmented reality glasses are forecasted to reach around 19.1 million units by 2021. Combined with VR devices, that number could hit 59.2 million units.

Obviously, Lockheed Martin is already a fan. But Bolthouse urges companies to be strategic before incorporating AR and VR into its operations.

“The first thing to recognize is VR is not a sliver bullet. The designers, engineers, shop floor technicians — they are the experts — VR is just a tool to allow them to better understand and communicate,” Bolthouse says. “It’s not about replacing their knowledge but rather enhancing how quickly and thoroughly they can get to the best solution. That said, the technology is still relatively new for most companies, so the introduction and adoption of this technology needs to be carefully planned.“

Virtual reality has been ingrained in the culture and operations at Lockheed Martin, and Bolthouse expects augmented reality to have a bigger impact.

“It should certainly be understood that AR is going to be even more transformational. Like VR just a few years ago, the only thing holding back the AR floodgates right now is the hardware. Enterprise companies are keenly aware of the tremendous advantages AR once the hardware is ready, and we are deploying AR onto our assembly lines, as well,” he says.

He recommends that as company leaders draft their framework, they consider the five factors in Everett Roger’s book Diffusion of Innovations:” observability, trialability, complexity, compatibility, and relative advantage.

Jones says that the younger generation will likely have an easier time incorporating AR and VR into their lives and careers.

“I’m not a gamer. I didn’t grow up in that generation. When I was in college, Pac-Man just came out, so take a guess at how old I am,” Jones laughs. “But kids today are working with video games and it’s part of their DNA. So, it’s a natural transition to using AR/VR to help train these individuals.”

He says to be competitive, relevant and progressive, engaging with this technology is simply the first step.

“I just saw something last weekend. Elon Musk and Jack Ma were at a conference. Elon showed a picture of continuous life learning and said eventually we’re at a point like the Matrix movies – put a disk in your brain, and now we can be a helicopter pilot. AR/VR tech is a stepping-stone to that,” Jones says.

Thomas Friedman: Technology is accelerating faster than our ability to adapt. We can catch up

Art Bilger on how technology is impacting the American workforce