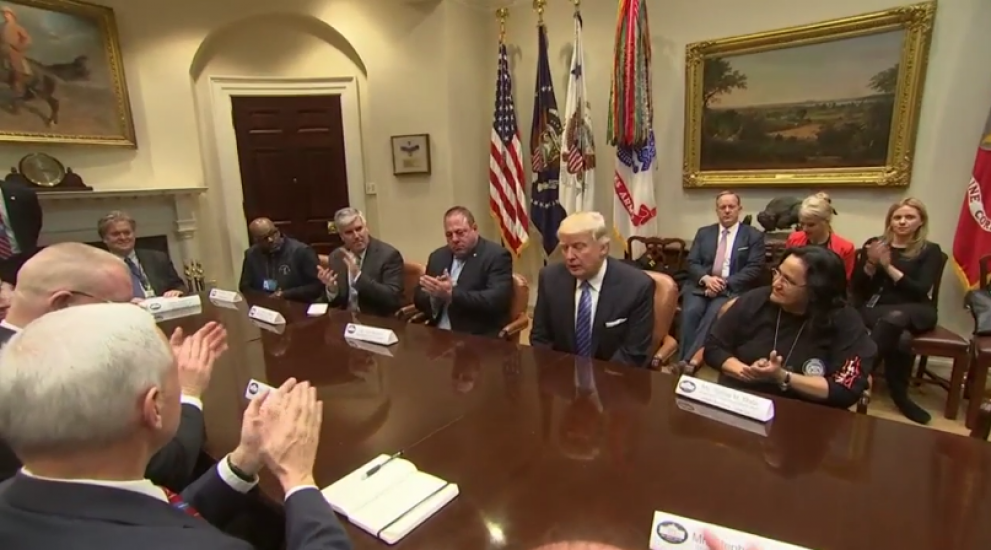 President Trump Kicks Off Week of “Heavy Focus on Jobs”

If there was any doubt that as president, Donald Trump would focus on jobs, let his first full day in the Oval Office serve notice, game on.

President Trump started his day welcoming CEOs from several of the country’s largest corporations. Trump promised to wipe out at least 75 percent of government regulations that hinder their businesses, again threatening to impose a “substantial border tax” on companies that move production out of the country.

Trump suggested that he hopes to convene this group quarterly to hear directly from the business community, saying that they are “great people” who have done “an amazing job.”

His message to them and all other other CEOs in the U.S., keep production home and you will be rewarded with incentives and quick approvals. For those who choose not to heed his advice, be prepared for substantial tariffs. And Trump put it in simple terms, he wants to help workers, “All you have to do is stay. Don’t leave. Don’t fire your people in the United States. We have the greatest people.”

And that was only the beginning.

Even before lunch, President Trump followed through on a key campaign promise, signing an Executive Order pulling out of the Trans-Pacific Partnership (TPP), calling it a “great thing for the American worker.” Later in the day, he met with union leaders who applauded his move. The TPP has been known to be unpopular with union workers because it allows companies to outsource workers to low wage countries.

Sen. John McCain (R-Arizona) criticized the move calling it, “[…] a serious mistake that will have lasting consequences for America’s economy and our strategic position in the Asia-Pacific region.” While Sen. Bernie Sanders (D-Vermont) praised the order saying, “I am glad the Trans-Pacific Partnership is dead and gone. […] For the last 30 years, we have had a series of trade deals — including the North American Free Trade Agreement (NAFTA), permanent normal trade relations with China and others — which have cost us millions of decent-paying jobs and caused a ‘race to the bottom’ which has lowered wages for American workers.” So whether or not this ends up being a net jobs creator remains to be seen.

Another executive order Trump signed Monday was a freeze on federal hiring, which excludes those in the military, a move included in his “Contract with the American Voter […] to clean up the corruption and special interest collusion in Washington, D.C.”

In anticipation of Trump’s move for a federal hiring freeze the Obama administration worked hard to hire people before the transition was complete. But for those who have yet to start working, their new jobs may be at risk.

Some items left on his “Contract” for his first 100 days include:

With regards to NAFTA, Trump told reporters that he will address it “at the appropriate time,” and at a press conference Monday, White House Press Secretary Sean Spicer told reporters President Trump is “very, very keen in making sure we maximize use of our natural resources to America’s benefit […] that areas like the Dakota and Keystone pipeline areas that we can increase jobs, increase economic growth, and tap into America’s energy supply. That’s something that he’s been very clear about.”