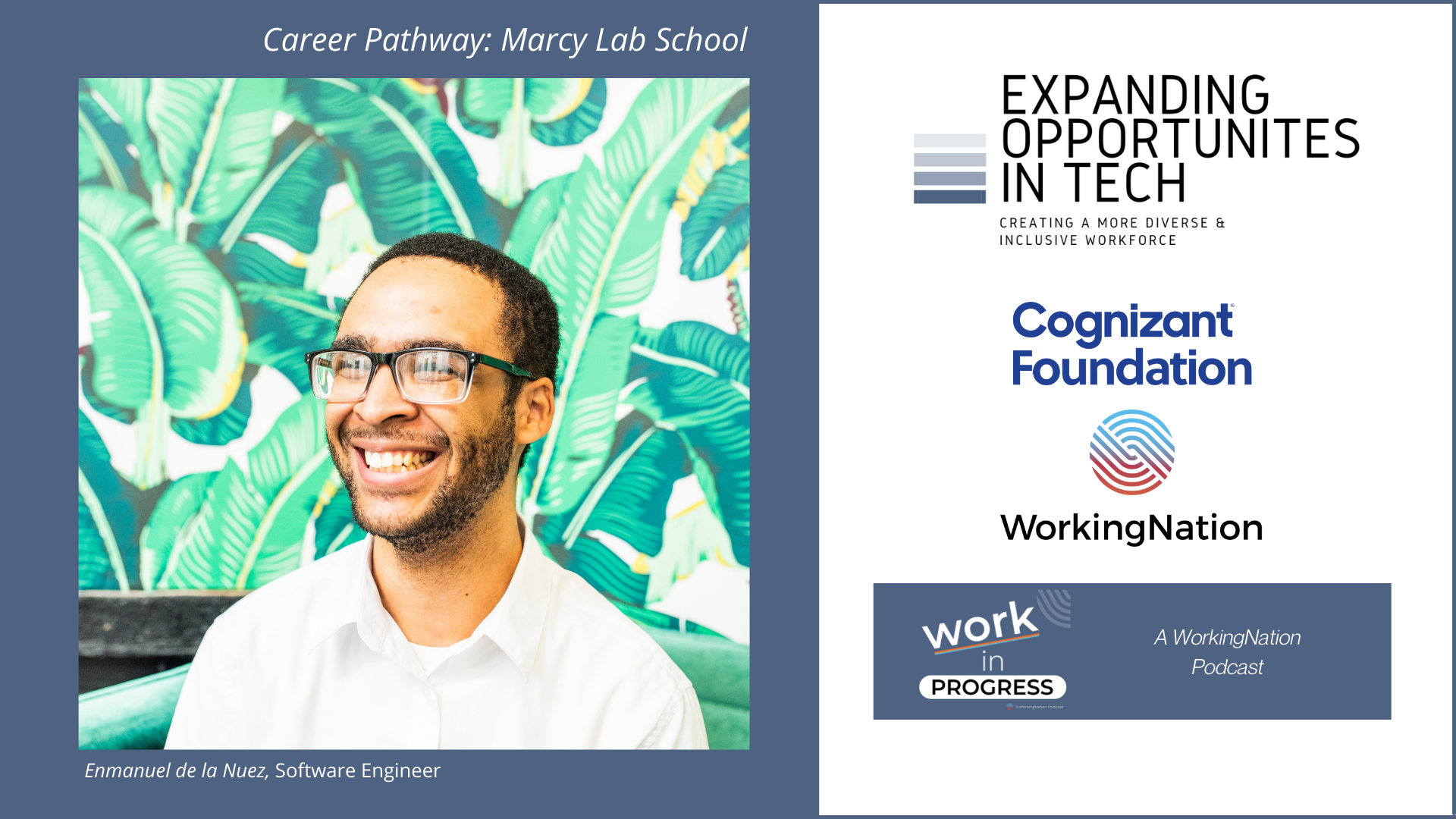 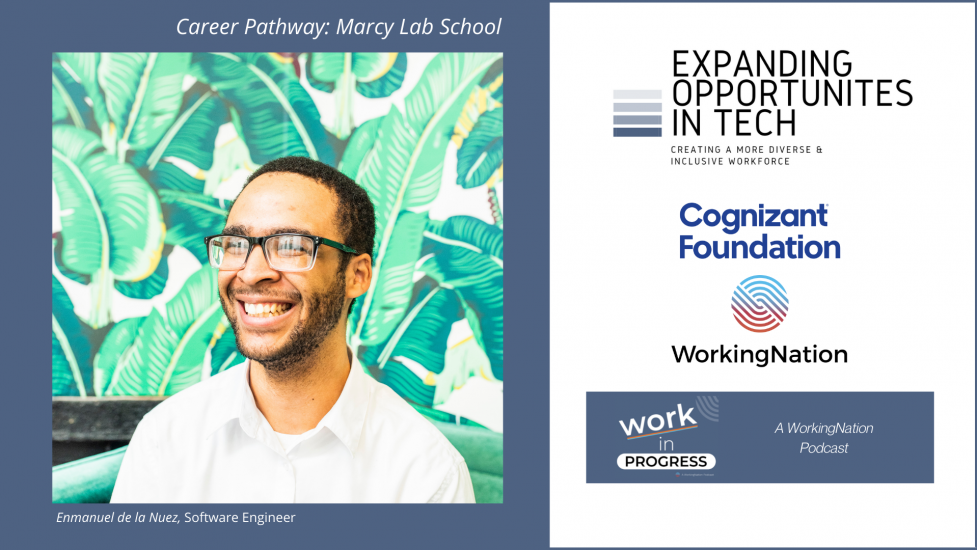 Trying to figure out how to break into the tech industry can be daunting. Traditional four-year institutions can be expensive places to learn computer science and lack of exposure to the skills needed in the industry as a whole can derail a career before it gets started. In this Expanding Opportunities in Tech Work in Progress podcast series produced in partnership with Cognizant Foundation, we examine alternative, free training programs, each offering a foot in the door to teens and young adults from historically underrepresented groups in the tech industry, including women, BIPOC, and people from low-income backgrounds.

When he moved to the U.S with his family from the Dominican Republic at age 10, Enmanuel de la Nuez didn’t speak English, but he learned quickly. By middle school in New York City, he was thinking he would like to become biomedical engineer. His first exposure to computer science was in high school, and it did nothing to change his mind.

“The first problem in the class was coming up with an algorithm to determine if a word is a palindrome—all the characters are the same in reverse as they are forward—and I remember having a lot of trouble with that,” de la Nuez explains in the podcast. “So, the first exposure that I had to computer science made me think computer science is not for me.”

But, as he was approaching graduation, he started to think about how he was going to afford the education he would need to get a good-paying career. “A big part of my decision to not go to college was about the money. I was one of the older siblings in an immigrant household. I was very aware of the financial burdens that my family was dealing with…and what me not being able to meet all my financial responsibilities of school would mean for my family.”

That’s when he discovered the Marcy Lab School, a one-year alternative to traditional college, offering a software engineering fellowship program that gives students not just the computer skills needed to build a career in tech but leadership training and networking.

Students pay nothing for the program, but there was something else about it that made him finally decide to apply. “The Marcy Lab School application kind of changed my mind about what it would be like to be working in tech. The questions in the application were more about how would you use technology to help your community? And that made me interested in giving it a second chance, knowing that it was something that I could apply directly to helping people, as opposed to something that’s purely abstract in school.”

During the one-year fellowship, de la Nuez and his classmates learned JavaScript, Python, and how to build applications. As part of the program, he landed a paid six-month apprenticeship at Asana, the office collaboration software company. That’s where the networking comes in. “The apprenticeship is very much aimed at converting apprentices to full-time engineers and they try to make it as real as the actual full-time position is,” he tells me. That’s an introduction to the field that students in traditional colleges don’t always have.

At the end of the six months, he was asked to stay at Asana as a full-time engineer. “Applications to be a software engineer, usually have a lot of requirements. Some of them being a college degree, which none of us had. I can definitely understand the feeling that it’s hard to get started and find that first opportunity. I think Marcy Lab helped a lot with the first step, not only because they were able to connect us to recruiters directly and engineer’s of those companies, but also because we learned a lot about how to navigate those requirements and the mindsets that the people looking for applicants have.”

‘We’re trying to combat inequities that took decades, centuries even, to solidify’

de la Nuez, now 21, says he wants to use technology to help change his community for the better, a mission encouraged by the Marcy Lab School itself. Co-founder and executive director Reuben Ogbonna explains that the school strives to propel underestimated young adults into purpose-driven careers in a high-demand field.

“The Marcy Lab School was founded and based on my experience as a public school teacher. I saw just how often high-potential, hardworking, highly-motivated students go off to college each year only to find themselves in a ton of debt and under-prepared for the types of jobs that they deserve, the types of jobs that allow them to build wealth, move into leadership positions in their community, and really change things for the better.”

Ogbanna says the school targets those students who have disproportionately been left behind by the traditional higher education system—low-income students, immigrant students, and students of color. “We’re trying to combat inequities that took decades, centuries even, to solidify.”

Marcy Lab School is better equipped than a college to keep pace with the changing standards in software engineering, argues Ogbanna, because by the time college textbooks go to print companies often have moved to a new technology. “We’re in touch with industry professionals on a regular basis to make sure that we’re teaching fundamentals in the context of the tools that they will use on the job. What that means is when our students get on the job into internships and into the industry, they’re able to be productive really, really fast in comparison to their peers who went to traditional colleges.”

The software engineering fellowship is free and the school also provides students with a laptop and a small stipend, funded by donations to the nonprofit. Marcy Lab School is located in Brooklyn and classes are a mixture of online and in-person. After graduation, entry-level jobs in the industry can start at between $70,000 and $100,000. If you’re interested in applying, check out more here: Marcy Lab School FAQs.

Valerie Red-Horse Mohl on the wealth gap and economic prosperity

Maurice Jones on progress around DEI

Nicole Elam on access to funds for minority and women entrepreneurs

Dalila Wilson-Scott on retention and advancement