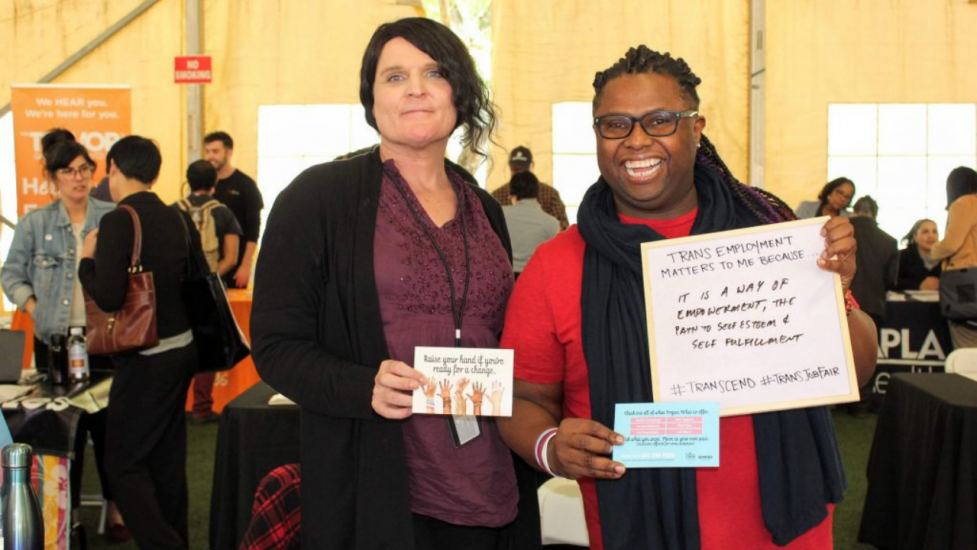 Pushing the workplace to be inclusive of the trans community

Celia Sandhya Daniels left her native India and moved to the U.S. in 1997 shortly after getting married. She had a very successful career in the corporate world, working more than 20 years as a senior executive at a number of companies.

What her co-workers didn’t know was that Daniels is a trans woman who had decided many years ago—as a child—to live her public and work life as male.

After establishing her career, Daniels wanted to be able to go to work as her true self.

“In the last company that I was working, I was three levels below the CEO. When I came out in that company, I found the company was just pinkwashing, but did not really have any policies for trans. I didn’t feel like working in the company and I quit the company.”

Daniels says when she tried to find a new position, she was not given serious consideration. “Another big disparity that I saw—that’s the biggest problem that I see even today—was all my education, all my 23 years of experience, was completely marginalized when I came out.”

These are not the only issues trans people face in the workplace – issues that the nonprofit TransCanWork, Inc. is attempting to address. Daniels in now their chief programs officer.

Daniels came out to her mother when she was four years old. She recalls at the age of 10 or 11, she was publicly humiliated and threatened by a crowd of 20 people when she left home wearing girl’s clothing. “I grew up in a culture where patriarchy was so prominent. Growing up in South Asia, being a boy was a privilege. Being a man was a privilege,” says Daniels.

She says she had the realization, “I won’t be a girl. I will be a trans person. And being a trans person is like the bottom of the food chain in the entire ecosystem within India.”

“When you’re a trans person, people can murder you. They can abuse you. They can do whatever they want, and you will not be able to have a voice,” adds Daniels.

Fearful about how the repercussions would affect her parents, Daniels says she made a decision. “I’m just going to suck it up and start living my life. No one needs to know. I’m just going to hide it. And that’s how my life was started in a closet.”

It took decades for her to start living her life on her own terms.

After receiving full support from her wife and coming out to her then-teenage daughter, Daniels began volunteering five years ago at TransCanWork, which is “committed to advancing workplace inclusion through innovative training strategies and workforce development.”

TransCanWork provides workforce development and wraparound service support to jobseekers. The organization also does trainings for companies and government agencies that want to create an inclusive workplace.

“Our focus is very much in the niche of the trans community,” says Daniels. She explains, more specifically, “TGI refers to transgender, gender variant, and intersex community.”

Last year, Daniels started serving on the organization’s board before moving into her current role as chief programs officer.

Levels of unemployment are high in the trans community. The most recent U.S. Transgender Survey (USTS), from 2014 and 2015, indicates respondents had an unemployment rate of 15% compared to 5% for the general population.

Daniels says when companies approach TransCanWork for advice about hiring from the trans community, her questioning is deep. “’Would you like for us to come and talk to you about what exactly it means to hire trans?’ Because the issue I have seen is companies are willing to hire people, inviting them into a boat and saying, ‘You know, all of you just get into this wonderful cruise. There is no life jacket. There is no lifeboat, nothing. Just get into it.’

She continues, “Nobody in their right mind would join an organization that really doesn’t see the future of that employee in that company. And that is how it’s very short-lived.”

Daniels adds, “When we talk to them a little bit about ‘What happens if you hire a trans person without any of these policies, without any of these inclusions?’ Medical benefits, pronouns, biases, and all the issues that they are going through. ‘You don’t know any of this. I know you have good intentions in hiring, but are you able to retain them?’”

Companies Who Restructure Their Framework

Daniels says it’s positive when she hears, “’I think we’re going to hire trans folks and we want to make sure our company is inclusive. We don’t have trans folks in our company, but we are making sure that we have the right framework, the support structure, and a safe space for trans people.’”

Daniels says there are companies that turn to TransCanWork for job candidates when they have open positions. “We know these organizations so well that we do intelligent matching of our resumes.” But some get even more involved, she adds. “These organizations that we work with have come and given us resume writing workshops. They have given us workshops for how to be an entrepreneur or how to do well in job interviews.”

The Index notes, “In the 2021 CEI, 767 employers achieved a top score of 100 and earning the coveted title of ‘Best Place to Work for LGBTQ Equality.’”

Look at the ‘Whole Package’

Daniels has a response to those who tell her she chose a lifestyle. “It’s not a choice that I made. This is my life. And no matter what I do, I cannot change who I am because gender identity is in the head. For me, I want to be known as a trans woman, right? To me, that is what I want.”

But also calling herself a human rights activist, Daniels adds, “But it’s not just a label of a trans woman. A parent, an immigrant, a photographer, a hiker, blogger, entrepreneur, musician, singer-songwriter. These are my credentials. Look at me, the whole package. Don’t just look at me as ‘Celia is trans’.”