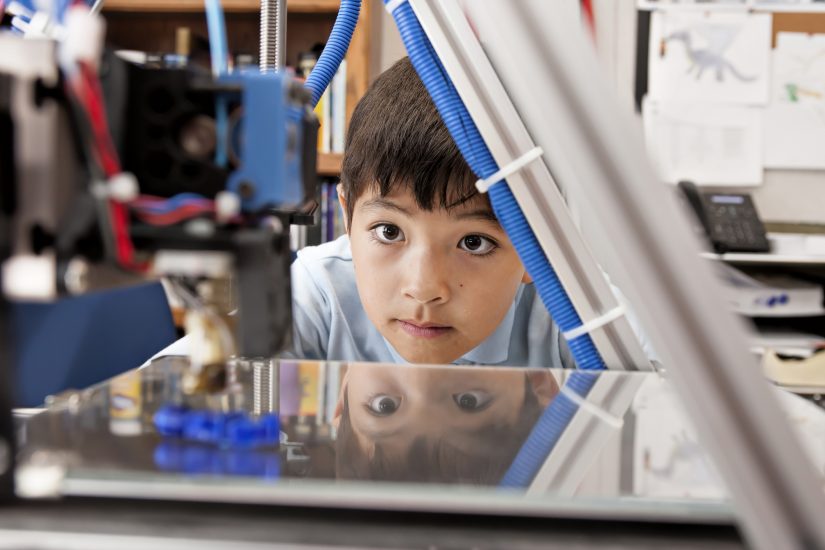 At the beginning of this past school year, the Oshkosh, Wisconsin school district plunked a brand-new 3D printer into Jason Jischke’s South Park Middle School classroom. At first, the technology and engineering teacher didn’t know exactly what he would do with it, and had anyone told him, he wouldn’t have believed them.

In spring of 2016, a local woman who had seen a local news story about the printer emailed Jischke asking for help. She had adopted a duck named Phillip that had lost both his feet to frostbite over the winter—could Jischke use the new printer to whip up some prosthetics?

At first, Jischke dismissed the idea, but eventually he sketched a design and started running a test print, keeping his students informed of each step along the way. While he was in the middle of the 39-hour print, he got another email from the duck’s owner. Never mind, it read. Phillip was going to be put to sleep.

“I immediately called her and said, ‘Hey, hold off!’” he said. “She was an hour away from putting him down.”

The story has a happy ending. Jischke had to redo the prosthetics three or four times and enlist the help of a design engineer he found online, but Phillip eventually got his new feet and was sent to live happily every after in an animal sanctuary.

Perhaps more importantly, by following a complicated 3D printing job, Jischke’s students became familiar with a technology that promises to revolutionize manufacturing at a time when more and more jobs in the sector are being outsourced and automated.

What’s more, as 3D printers become more common in American classrooms, students are learning valuable lessons about problem solving and design thinking that will help prepare them for the rapidly changing economic landscape of the future.

The Future of 3D Printing Jobs

3D printing is sometimes called additive manufacturing, which is less complicated than it sounds. Most manufacturing techniques are subtractive, meaning that they involve cutting something down—lasering through a sheet of metal or chipping away at a block of marble to form distinct shapes, for example. Additive manufacturing is a process of building something up, and 3D printers lay down very thin layers of materials ranging from plastic to sugar, one on top of the other, until the layers build up into a 3D object. The process is more customizable and often cheaper than traditional manufacturing.

Additive manufacturing first emerged in 1987, and engineers and scientists have been developing industrial and commercial applications for the technology ever since. But it wasn’t until 2007 that a company called 3D Systems introduced the first printer that cost less than $1,000, making 3D printers affordable to both hobbyists and school systems. These days, companies are using 3D printing to make everything from jet-engine parts to minibus fenders.

Two-thirds of U.S. manufacturers surveyed by Pricewaterhouse Coopers say they are adopting 3D printing in some way, whether to test it for future use or manufacture small parts. Nearly half of those executives said finding employees with the appropriate skills was the biggest hurdle to expanding the use of the technology.

Considering that the American manufacturing industry has shed some 7.3 million manufacturing jobs since 1979, the fact that manufacturing executives say they will need more people with 3D printing skills in the future should make educators, parents, and students alike sit up and take notice.

Vincent Garrison, a design and technology teacher at A. MacArthur Burr Middle School in Nanuet, New York, points out that learning how to use cutting-edge tools such as 3D printers provides an alternate path for students that aren’t suited for college, can’t afford it, or would rather work in a more hands-on environment.

“College is important, but college isn’t for everyone,” he says. “I wish there was a little more emphasis that there is another way – you don’t have to go into debt, and you can still be in a career working pretty quickly.”

Even for students who have no desire to work in manufacturing, working with 3D printers teaches important lessons about problem solving and product design that can apply to any career.

Garrison’s students use 3D printers to make parts for carbon-dioxide-powered cars that they race in a tournament-style competition. Those who want to break speed records design ultra-thin wheels that are lightning-fast, but likely to fall apart after one shot, he says. Those who are in it to win the trophy, however, build more durable wheels that can last through multiple heats. As in every job, students have to choose among various outcomes and decide what to prioritize in their designs.

Claire Pritchard, the technology integration specialist at St. Francis Xavier School in Wilmette, Illinois, says 3D printing not only engages students—one told her that “watching the 3D printer run is literally better than TV”—it teaches them the kind of perseverance and self-reliance necessary to succeed in any job.

“When you 3D-print something the first time, nine times out of 10, it comes out wrong,” she says. “I think for them that’s really powerful to see—I put all this effort in, and it still failed. So, what can I do?”

In a world where the competition for jobs is growing and many adults may find themselves switching careers to stay afloat, picking oneself up off the ground and trying again isn’t just a useful skill—it’s the skill.