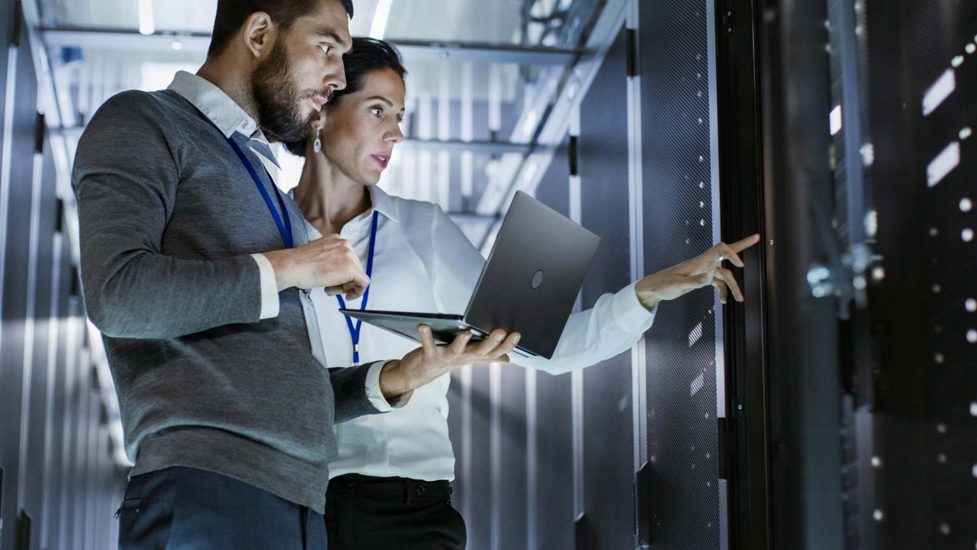 Over its nearly 140-year history, AT&T has been in a constant state of evolution, going from being a telephone company to a mobility company to a software-centric network. “Today, we’re focused on fiber and wireless, digital, everything mobile, the cloud. We’re gonna transform our wireless network into 5G over the next couple of years,” according to John Palmer, AT&T’s chief learning officer.

Replacing decades of old hardware, and moving toward a fully-digital model, has kept AT&T competitive in the massive telecommunications market. As its core technology has changed, so has the company’s workforce needs. In 2012, an internal study showed that within a decade nearly all AT&T employees would be doing jobs that required skills in science, technology, engineering or math, and more than 100,000 current jobs would be obsolete.

“I remember being in the meetings back in the 2012-13 time frame, when I heard our CEO Randall Stephenson, and all of our senior leaders, talk very candidly about where this company was, and where this company was going, and what the skills were that we needed for the future,” recalls Palmer. “We realized then that there was a pretty significant skills gap inside our own company, and the talent that we needed simply didn’t exist externally at the scale (we needed).”

So, AT&T set in motion another huge, critical, transformation — reskilling all 270,000 of its employees. It is a massive ongoing undertaking, but one the senior management agreed would be good for the company and for its employees.

“We celebrate the heritage of the employees that have built this great company and built this great culture. It’s just the right thing to do for us, to invest in them first, so they can have the chance to get the jobs of the future,” explains Palmer, AT&T’s first chief learning officer, appointed in 2016.

“The most important thing that we can do as a company is just be transparent to our employees about where we’re going and what skill sets are necessary for our future, and then create programs that they can engage in, and empower them to own their future differently than they ever had the opportunity to own their future before.”

Since the decision was made by AT&T to upskill its entire workforce, there’s been a steady drumbeat of investment, not just in learning curriculums, but in learning platforms and technologies, as well.

“Last year alone, we invested about a quarter of a billion dollars, $250 million, in training and development, plus we gave our employees about $34 million of tuition-aid assistance. And all of that amounted to about 20 million hours of training across the enterprise,” Palmer tells me.

Palmer says that it remains important to the company to come up with different, even effortless, ways for an AT&T employee to continue learning the skills they need to fill the new tech roles that the business strategy is creating. “When I first got this job a year and a half ago, I didn’t anticipate that I would have been spending as much time as I am on the platforms and the technologies of how to deliver training. We’ve got great curriculums, so it’s all about how you get people to engage, especially when you’re asking them to engage on their own time.”

Gone are the days of employees blocking off half-a-day for corporate leader-led training. All the curriculum for AT&T employees is mobile-enabled and self-guiding. “We want to mirror the environments that people consume news, and sports, and entertainment in today, and that’s short-form video, that’s engaging content, that’s modularized. We just want the content to be there for them literally at their fingertips, so that they can access it whenever, wherever, they want to.”

Employees have access to tools like the Personal Learning Experience, which employees can use to plan, access, manage, and track their training based on current and future job titles at the company. At myCareerProfile, which AT&T likens to a LinkedIn account, employees can post their skills, education and internal training certifications and Nanodegrees.

Among those Nanodegrees, developed with Udacity at Georgia Tech, are credentials in web development, data analysis, android development and programming. “From our perspective, we have to figure out the best ways to solve this from an accessibility and affordability perspective, and, obviously, a relevancy standpoint, as we focus on STEM talent and what we need for the jobs of the future,” according to Palmer.

“We get really excited about the work that we did with Udacity to create the first fully online Masters of Computer Science degree, at a fraction of the cost of a traditional brick-and-mortar degree.” The cost is just under $7,000. And, says Palmer, “it opens up a marketplace that didn’t exist before for people to be able to engage with that type of degree.”

“We’ve got the traditional ways that you can imagine measuring successful results of training programs, with assessments that people have to go through once they go through courses. For us, it’s also about the bigger picture, that’s what we’re really excited about,” says Palmer.

Employees are increasingly “able to immediately apply their new skills to existing positions or transition into a new role,” according to the company, which says 40 percent of the 40,000 jobs filled at the company in 2016 were filled with candidates found internally.

“I think it’s paramount for employers to think about how they can create opportunities for their employees to engage in all of the reskilling that has to go on,” Palmer tells me, “and it’s not unique to our industry, it’s in every single industry that’s out there.”

Palmer says AT&T is proud to be at the forefront of education innovation in the telecommunication industry. “We are always constantly open to sharing with others our best practices. We’re still learning every single day. We use it at all levels. It’s a culture of continuous learning.”

As chief learning officer, Palmer sees his job as continuous, fluid, and, perhaps, never done. “People understand that even if they went through a reskilling exercise over the last three years, that doesn’t mean that they’re done. There is gonna be more next year, and more the year after that. Honestly, we’re never going to be done with this program, because technology is never gonna stop evolving, it’s only gonna continue to evolve, and probably at a much more rapid pace than it has before, which is only going to make this even more fun and challenging for the future.”

And while the reskilling is important for AT&T and its business goals, it is also important to give back to the employees who have made the company so successful. “We, on the most macro levels, pay lots of attention to employee-engagements scores at our corporation. And as this program has taken off, and really gotten traction across the corporation, then you can see a direct correlation to the increase of our employee-engagement scores, which is just a fantastic thing for our company,” according to Palmer.

“Because the better, happier employees, the more productive, the more profitable companies can be. And that’s just something really important to us, to give our employees the best place to work, and create a great place that works for them.”

Connect with Ramona via Twitter. You can read her previous articles for WorkingNation at this link.