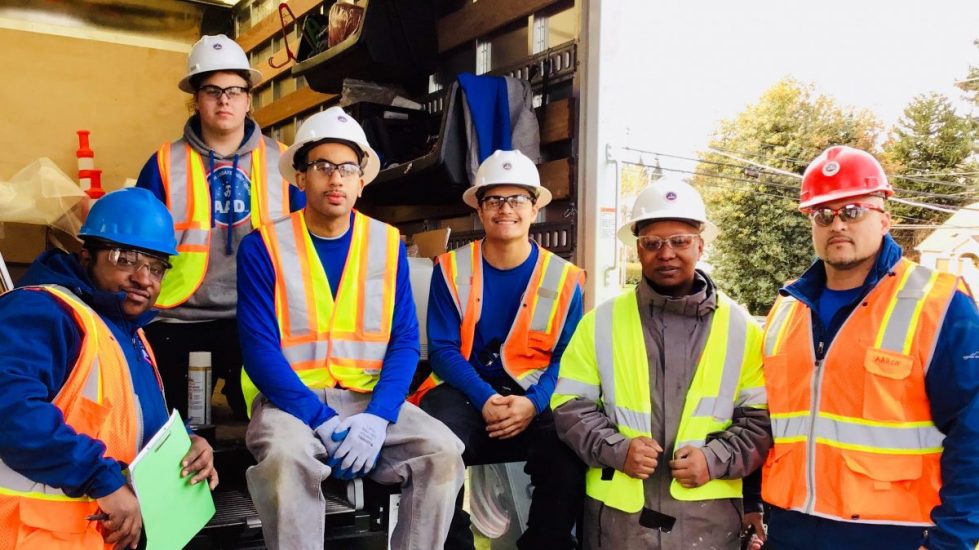 There are an estimated five million formerly incarcerated Americans. And for many, finding a job after leaving prison or jail is a challenge.

The unemployment rate for the formerly incarcerated is 27 percent, as of 2018, well beyond the national rate of 3.7 percent. Advocates say gainful employment is vital to cutting recidivism rates. 83 percent of prisoners freed in 2005 were arrested in the nine years following their release, according to a recent Justice Department study of 30 states.

These are numbers U.S. Army and Marines veteran and entrepreneur Mari Borrero is trying to impact through her small business and her advocacy work in education for those behind bars.

She and her husband Aaron, himself formerly incarcerated, have founded American Abatement and Demo, a small business based in Auburn, Washington. The firm hires those who have served time and provides them with an opportunity to earn a living wage.

Mari Borrero tells WorkingNation that she got her entrepreneurial spirit from her mother, a nurse and Puerto Rico native, who started her own medical care business for Spanish-speaking patients. She, along with her siblings, all helped out in the family business, starting at the bottom and working their way up through the ranks.

After college and the military, Borrero turned to teaching because of her son who was having problems in school. She also moved to Washington state where her husband was incarcerated. He was granted clemency and released. And while he was able to find a job, it wasn’t one that provided a livable wage.

“We started the abatement company while we were both still working full time jobs. Just kind of getting our feet wet because that was the industry he was in previously and he felt comfortable in it. And so that just made sense. And I had the business background I had with my mom over the years.”

Challenges to Growing the Business

Borrero notes there has been no shortage of challenges. Being a woman in the construction industry has been a big one. Being a Latina has posed its share of difficulties as well. But one of the biggest hurdles to overcome is that her husband—who spent 17 years in prison—is her business partner which has made it tough to get financing.

“It just so happens that Washington is a community property state. And so even if I have majority ownership in the business, they still have to look at him because I’m married to him,” according to Borrero. “So how do you build and grow your business to help more people when all these barriers, the financial barrier specifically, impacts you?”

Help from the Outside

In scaling her business, Borrero also has gotten help from the Stanford Latino Entrepreneur Initiative. It helped her and her husband better clarify the company’s long-term goals and tackle some of the problems they were having with employees.

“We stay in the everyday grind. We’re trying to keep the lights on. So, we’re really working our business instead of stepping back and kind of planning our five-year plan, how we scale the business, how do we keep our mission going and are margins enough to keep our mission going. So, most small entrepreneurs get caught up in the everyday tasks to where you don’t manage and look at forecasts and you’re in a very reactive role.”

Borrero says the Stanford experience came at a time when there was some negativity going on in the company. But it taught her to take ownership of the situation in order to move the company in the direction she and her husband wanted.

Six of the company’s employees left. She says her experience with Stanford prepared her for that possibility. Slowly, they bounced back and now have the kind of company they envisioned.  Today, American Abatement and Demo has 12 full time employees, 10 of which have previously been incarcerated.

Hiring veterans and the formerly incarcerated has always was part of the business plan. There have been two paths to hiring workers. One is through Aaron Borrero. His past incarceration and transition to a business leader has motivated many to reach out to him. The other is the couple’s University Beyond Bars (UBB) program.

The goal of the program is to “replace incarceration with education and build a society where all people are given a chance to transform themselves and their communities.” The philosophy is that education is the key to giving people a better life once they’re released from prison, increasing prison morale, and reducing recidivism rates and the money spent on incarceration.

The program offers three educational pathways (degree, certificate and lecture series) to inmates at the State Reformatory in Monroe, Washington. Each semester UBB offers 20-25 courses in the humanities, social sciences, math, and science, as well as college prep classes in English and math. It generally takes about three years for a student to complete an associate of arts degree.

UBB is the first post-secondary experience for 69 percent of students.

Aaron Borrero was one of the founders of UBB and also a student in the program. He says UBB provides positive change in a brutal environment.

“Prison creates this environment that is so debilitating. It’s just nothing but hurt people in there. There’s a lot of pain and tons of negativity and racism. It is not a place to be,” Aarons Borrero says, recalling his experience behind bars.

“University Beyond Bars literally changed the culture in a maximum security penitentiary where all of a sudden you have guys who think education is cool, changing your life is cool, becoming a productive member of society is cool and what you should strive to be versus hating the next guy, in just perpetuating the life. It has made great changes.”

Impacting Communities by Helping Others

One of the challenges faced by American Abatement and Demo is that it’s an industry in which low bidders often get the job. And, according to the Borreros, that means some businesses cut corners or break the rules.

Those are the same things, as a second-chance employer, that landed many of the employees behind bars in the first place. But Aaron Borrero says his workers take pride in his company’s reputation as a top-quality company and he is equally as proud of them, knowing they stand with the best in the business when no one believed they could make it.

Mari Borrero encourages more businesses to hire those who have spent time behind bars and not to be intimidated by the previously incarcerated.

“I think that maybe if they at least give it a chance, they could also see the value in it and plant seeds in their community because ultimately that’s what we want to do. We want to impact communities while helping others.”

WorkingNation will be moderating a panel discussion on how education and a good job can help combat recidivism at the SxSW EDU conference on Monday, March 9.

We’ll also be presenting a panel discussion on empowering Latinas through education and entrepreneurship at the conference on Wednesday, March 11.

Latino entrepreneurs are growing in numbers
A critical crossroads: The intersection of the future of work and the future education
Moving from incarceration into the workforce