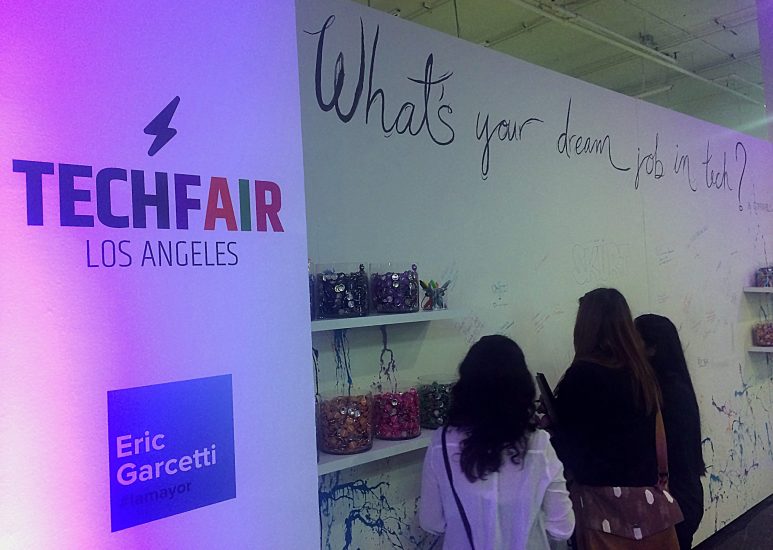 The idea that there is a lack of jobs in the U.S. has become a big misconception as of late as President Donald Trump publicly works hard to bring jobs back to America. The truth is while there are jobs that are or have been fazed out due to emerging technology, automation and a changing economy, there are 5.8 million jobs that are available right now.

The line at The Reef wrapped around the city block with job hopefuls eager to meet with hundreds of Hiring Managers and Recruiters from 250 local tech companies including Uber, Snap, and Tesla, all the way to blossoming companies like Blurr.

When WorkingNation heard about this event, we jumped at the opportunity to speak with a diverse crowd of individuals to gain a ground-level understanding of what the local tech market looks like, discover any challenges that both sides might face, and see if there are real career opportunities in the community.

Outside of the sheer amount of attendees, one of the things that stood out most about the TechFair was the large number of companies toting “Now Hiring” signs at their booths. Openings were available at nearly every company, across many different departments including sales, engineering, marketing & branding, and business development. It was clear that there was no shortage of excellent jobs available; however, it raised one fundamental question that WorkingNation actively addresses: were there qualified candidates for these jobs?

QUIZ: Are You FutureProof?

WorkingNation spoke with Angela Mayhew who is the Senior Recruiter at FabFitFun, a subscription service that sends its consumers a box of the latest in beauty, fashion, fitness, & wellness every season.

Mayhew told us FabFitFun attended the fair to educate the LA scene about the company but also to showcase the many open positions currently available. We checked in with Mayhew this week and she said she was surprised and excited to find many qualified candidates for their vacant roles. They are currently interviewing applicants, many of whom she met at the fair.

WorkingNation also had the chance to speak with some job seekers. One individual, who was recently laid off by a startup company he worked for for the past two years, said he heard about the fair through a friend and attended specifically to look for sales positions. At the fair, he handed his resume to three companies but said he wasn’t expecting much to come out of it.

WorkingNation recently caught up with him, and he said, in the past week, he has had multiple interviews and is currently in the final round with a local company. He admitted that the fair exceeded his expectations and he was pleased with his current, personal results.

After attending the event, one thing is clear — with the migration of tech companies away from Silicon Valley and towards cities like Los Angeles, new and fruitful career opportunities are available in abundance for local workers who possess the appropriate skills and experience. It also offered incentive for Angelenos who aren’t ready but want to make a transition to seek the proper training and education to get themselves in the door.