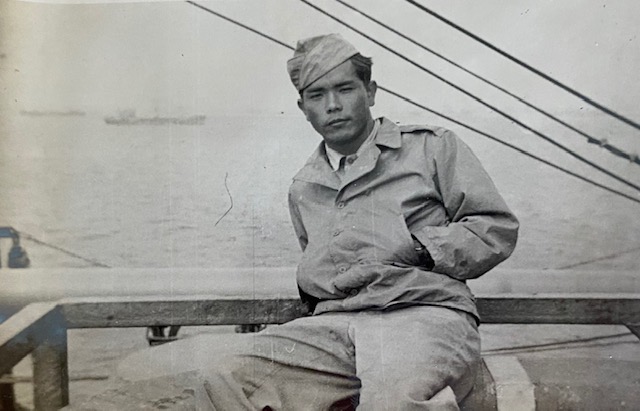 Throughout the month of November, WorkingNation has been featuring content focused on veterans. Typically, we don’t share our personal stories on these pages. This is one of our rare exceptions.

My parents’ story is quite incredible. Something I should have appreciated more growing up in a suburb of Cincinnati. This piece is about my father. My mother had her own amazing journey, but that’s for another time.

My dad’s name is Yoshimori Aka. People call him Roy. He’s 98-years-old and still lives in Ohio, not far from the community where I was raised.

When I was growing up, my dad was just the oddball who stood in our front yard wearing his Hawaiian swimming trunks, a fishing hat, a short-sleeved white undershirt, and black socks with his work shoes. This was the outfit he wore to swing at dandelion puffs with a golf club.

My dad’s career spanned decades at General Electric. That itself is unusual these days. As part of the jet engine division, he traveled all over the world acting as a liaison between the company and military clients. As overseas program manager, every year he visited many places including Japan, Vietnam, Taiwan, Germany, Italy, and Egypt. If you were to ask my dad today, he would list about a dozen countries.

Considering he grew up in a rural part of Maui—with a short childhood stint in Okinawa—where he ended up, turns out to have been quite the achievement. My dad tells stories that he and his five siblings shared one hardboiled egg for lunch, rode a donkey to school, and had no shoes. He says, as a kid, he would wait nearby and steal the picnic lunches of beachgoers when they would leave their blankets to go for a swim, adding, “I was a wild child.”

When the Japanese bombed Pearl Harbor, his sister Bernice was living in San Francisco and was interned on the mainland, first at the Santa Anita Racetrack in Arcadia, California, and then in Arkansas. His father Ryosei was a Japanese language teacher in Hawaii who received his textbooks from Japan. Because of that connection to Japan, he was labeled an “enemy alien.” He was also arrested and shipped to camps, first in Hawaii, then in Louisiana, and next a Department of Justice facility in Montana.

Naively, my dad thought if he enlisted in the U.S. Army, he could travel from Hawaii to the mainland to retrieve his sister and father. Not the case.

Serving in the Pacific Theater

Before Pearl Harbor, the U.S. military had already established a program to meet a need for Japanese language translators. One of my dad’s brothers, Raymond, became an instructor at Camp Savage in Minnesota. After my dad’s enlistment and basic training, my uncle managed to get him into the Military Intelligence Service (MIS) program to hone his language skills.

My dad served as a technical sergeant (renamed in 1948 as sergeant first class) in the Pacific Theater. I was well into my adulthood when I learned for the first time that without large weapons, carrying tins of sardines and cigarettes, the Japanese American soldiers (Nisei) went into caves on the island of Saipan to talk to the Japanese soldiers hiding out there.

After successfully persuading the Japanese soldiers to surrender, my dad’s duties also included the interrogation of them. He says that questioning involved topics like troop strength, location, defense plans, and types of artillery.

After the war, my dad was stationed in Tokyo translating Japanese documents. Local people were recruited to work in that office for the summer and that is how my dad met my mom. Momoko was the daughter of a retired Japanese naval officer. Her work at the office ended in the fall when it was time to return to college. She once told me that, at the time, she had no idea my dad had developed an interest in her. She said, “He just started showing up at my house.”

The fact that he made the decision to go uninvited to the home of a retired Japanese naval officer is incredible to me. When I asked my dad, not too long ago, if he took flowers or gifts on his visits, he said, “I would take steaks.” Something he could get, but her family could not.

Higher Education on the GI Bill

My dad courted and married my mom in Japan, and then moved back to the U.S. After returning to Hawaii, my dad got his B.A. in political science.

My parents eventually ended up in Des Moines, Iowa, where my dad obtained a master’s degree in economics from Drake University thanks to the GI Bill. While in Iowa, they lived in a student trailer park in a trailer without running water, only community bath facilities.

After my dad finished school, legend has it, they were on their way to Boston because my mom wanted to live there. A stop in Ohio to visit my dad’s sister Bernice resulted in them never leaving.

My dad started his long career with G.E. at the Evendale facility in the Cincinnati area. He says, “The military taught me to be more disciplined. It helped me be more organized with my job. I would get my work done right away. Don’t delay. Do it as soon as possible.”

Growing up, I didn’t ask a lot of questions about my parents’ stories. Something that I regret now. To me, they were just my parents and, unfortunately, I didn’t have a lot of curiosity. When I was a kid, neither of them talked about the war years. My mom passed away last year and these days, my dad is in cognitive decline.

Proud to Have Served

It is lovely, however, that his pride in his service became more apparent to me in 1999 when the Go For Broke monument dedication took place in the Little Tokyo neighborhood of Los Angeles. My parents flew from Ohio to California for the event. Names of all the Nisei soldiers are etched in the polished black stone.

Then in 2011, it was a great honor when the Japanese American members of the MIS, the 100th Infantry Battalion, and the 442nd Regimental Combat Team were awarded the Congressional Gold Medal. My sister Karen and I accompanied my parents to the celebration in Washington, D.C. The actual medal is currently on display at the National Museum of the United States Army (NMUSA), but each veteran or surviving family member was given a replica.

For weeks after the award ceremony, my dad carried his replica everywhere. He showed it to his friends and staff at the retirement home where he lives. He took it to the barbershop. He kept the medal in its velvet-lined box in his jacket pocket, at all times, just in case he ran into someone who hadn’t yet seen it.

What a life well-lived. What odds he overcame. What experiences he had. His short-term memory is gone. In my daily phone calls with him, he repeats the same questions over and over. Sadly, he frequently asks what happened to my mom.

But some of his long-term memory is still intact. When I recently told him, he had lived a “crazy, interesting life,” he just chuckled.

I also brought up his military service. As a recipient of the Bronze Star, in addition to the Congressional Gold Medal, he said, “We did a lot. We translated documents, we interrogated Japanese soldiers. I feel proud of my contributions.” And then for the fourth time in that phone call, he asked me, “Where are you calling from?”

2020 has been a year full of tumult and grief. I wake up many days looking for a shining light. I realize I don’t have to look very far. Even though dementia is now taking pieces of him, my dad—who went from self-proclaimed wild child to decorated Nisei veteran—is a beacon for me.

Thank you for your service, Dad.

Laura Aka is the Senior Editorial Producer for WorkingNation. 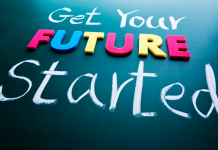 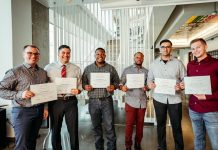