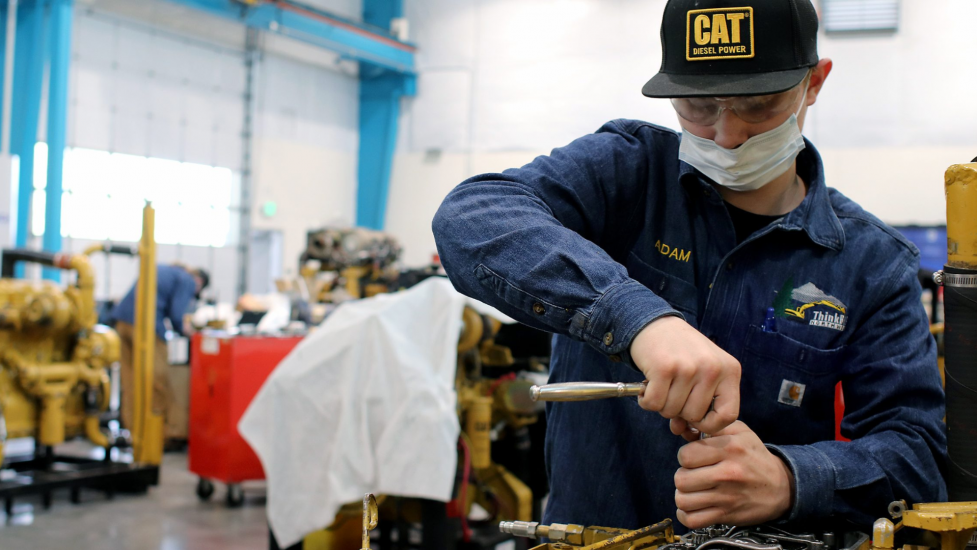 Long before he graduated high school, Adam Wannamaker knew the career path he wanted to pursue. He wanted to follow in his father’s footsteps.

A partnership between big equipment-maker Caterpillar and Portland Community College (PCC) in Oregon is helping him do that and more.

There’s a continuing huge demand for skilled service technicians at Cat dealerships around the country, with the parent company saying it needs to hire thousands of technicians a year to keep up with customer needs. In response, the company developed ThinkBIG, a two-year associate degree program that combines hands-on class and shop work with an earn-and-learn internship to train a new crop of service technicians.

Around the country, students are hired by local dealers who then sponsor the students’ training toward a degree in applied sciences and a dealer service technician degree. The program consists of five terms on campus – learning theory and engaging in shop time in their respective schools – and four terms at their employer-dealership – putting into practice what they’ve learned.

Wannamaker’s employer-sponsor is Peterson Cat, the same northwest U.S. equipment dealership where his father has worked as a field technician for years.

Learning in the Classroom and On the Job

“There’s a shortage of technicians, especially well-trained, qualified technicians. (ThinkBIG) is designed to address the shortage with quality training,” says instructor Jesse Norconk who teaches at the PCC program which serves dealerships in Oregon, Washington, Alaska, Idaho, Montana, and part of California.

The price of attending the ThinkBIG program varies by location. Typical costs include tuition and fees, book and supplies, housing, meals, and hand tools. Students can earn $20 to $27 an hour with a paid internship with the sponsoring dealer which helps offset some of those costs.

The program at PCC – started in 2006 – is so popular, it expanded into a new 16,000 square foot Dealer Service Technology Building in July, triple the size of the original PCC ThinkBIG training facility.

The contractors who built the new space had just finished building a local Caterpillar dealership in Portland and designed the school’s facility to mimic it. A half-acre sandbox on campus enables students to operate earth-moving machines, push dirt around, test, and adjust the machines.

The school’s training program is held to the same standards expected as a dealership. “That makes the transition from education to industry seamless. That part of it has been really great,” Norconk says.

The PCC shop curriculum covers servicing of mining, forestry, and agriculture equipment, as well as the relatively new training for diesel-driven electric generators and marine applications.

With the increasing interest, and more space, PCC has been able to grow its cohort from 24 students to 36, and add a new instructor to keep the ratio of 12 students to one instructor. It boasts a graduation rate “in the upper 90s,” Norconk says. Since its launch, the PCC ThinkBIG program has graduated 182 students.

Most students are from rural communities, and includes one or two females in each class. Since dealerships make the initial hire, the school can’t dictate who the candidates should be. But Norconk says they are working with recruiters to attract more ethnic diversity.

The Caterpillar-specific training is backed up with 2,000 hours of paid work experience. While salaries fluctuate between dealerships, graduates can start around $27 an hour. Some of the skills and experience students get could be transferrable to other companies, but Norconk says it’s more likely they stay and grow their careers within Caterpillar.

“As the years tick away, the students aren’t just techs on the floor. Some are service managers, running dealerships, or back to Caterpillar corporate to do research and development. We get to see these ThinkBIG graduates infiltrating the entire industry. I can see their success right there. We’re preparing students for huge leaps and bounds in their career.

“This is a great example showcasing how a partnership with industry and education can make a difference. The money we get with training aids, equipment, tooling, help with curriculum – that goes the extra mile. That’s the special part of it,” Norconk says.

On the Path to an ‘Amazing Future’

Wannamaker can attest to the continuity between theory, learning, and putting it to practical use.

“You tell the dealership what you’ve learned and they put you on similar stuff so you can practice. The dealership puts you to work on other stuff, so when you come back to school, they teach you even more. You’ve seen it with your own eyes in the field of work you’re in,” he says.

Originally, Wannamaker planned to attend a community college closer to home for general diesel tech training. A flyer introduced him to ThinkBIG and he started in the program six months after high school.

When Wannamaker graduates next June, he anticipates starting off as a technician, working his way up to being a field trainee, and eventually a journeyman.

“I’ve always just been super hands-on, working on regular vehicles, trucks, and cars.,” Wannamaker says. “There’s always something different, which I love. There’s so many different machines and things to work on. This is what I want to do forever.”

“With such a shortage of technicians, I think there’s more money in it and that means a better life,” he says. “It’s setting me up for an amazing future.”