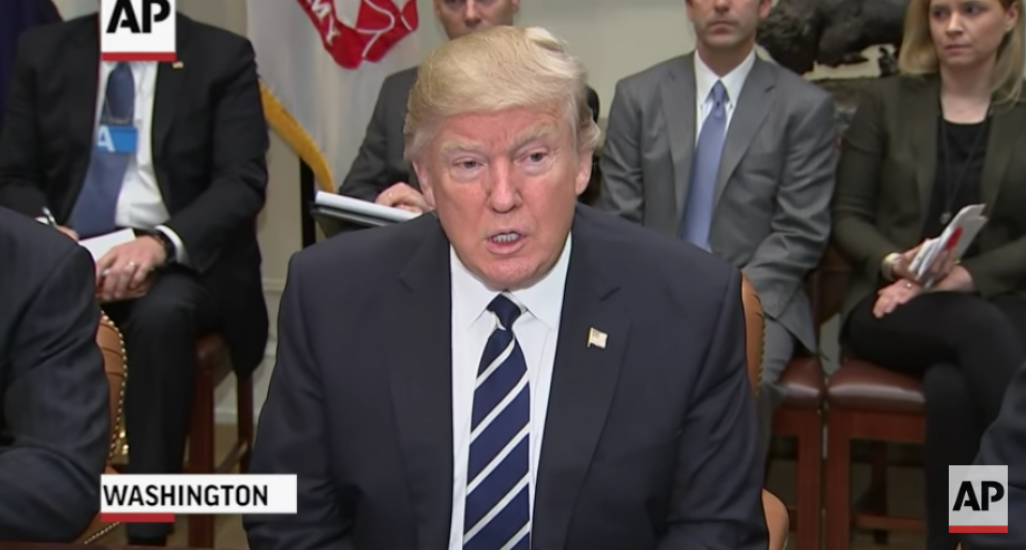 Trump Calls on Big Pharma Execs to Bring Manufacturing Back to U.S.

President Donald Trump continued to focus on jobs and deregulation Tuesday. During a meeting with pharmaceutical executives Tuesday morning, Trump called on them — as the cameras rolled — to boost U.S. production and lower prices.

Among those who attended the meeting were top executives at Merck & Co Inc, Johnson & Johnson, Celgene Corp, Eli Lilly & Co, Amgen Inc and Switzerland’s Novartis AG as well as the head of the Pharmaceutical Research and Manufacturers of America lobbying group.

As everyone was going around the table introducing themselves and their company, Joe Jimenez, chief executive of the Swiss pharma giant, Novartis, said that his company employed about 20,000 people in the U.S. Trump then asked him if he planned to expand in the U.S.

Jimenez said that tax reform would be a “massive help,” to which Trump replied, “We’ll get it.”

Trump’s call for more drug production in the U.S., saying that a lot of countries have moved out of the country for various reasons, is interesting considering that, “According to the Department of Commerce, most pharmaceuticals consumed in the U.S. are made here; only about a quarter of drugs are imported, or about $86 billion in 2015. The top five sources of imports are Ireland, German, Switzerland, Israel and India. The industry also exported $47 billion in pharmaceutical products in 2015,” as reported by The Washington Post.

Ways Trump wants to help companies bring jobs back and lower prices include decreasing regulations that have been “driving up costs and slowing innovation,” implementing a stronger trade policy that prioritizes “foreign countries pay their fair share for a U.S.-manufactured drug, so our drug companies have greater financial resources to accelerate the development of new cures,” and increasing competition by opposing anything that makes it harder for smaller, younger drug companies to get their medications to the market.

Not surprisingly, talk of tax reform, stronger trade policies and deregulation were attractive to executives.

“Tax, deregulation — those are things that could really help us expand operations,” Lilly CEO Dave Ricks said during the meeting.