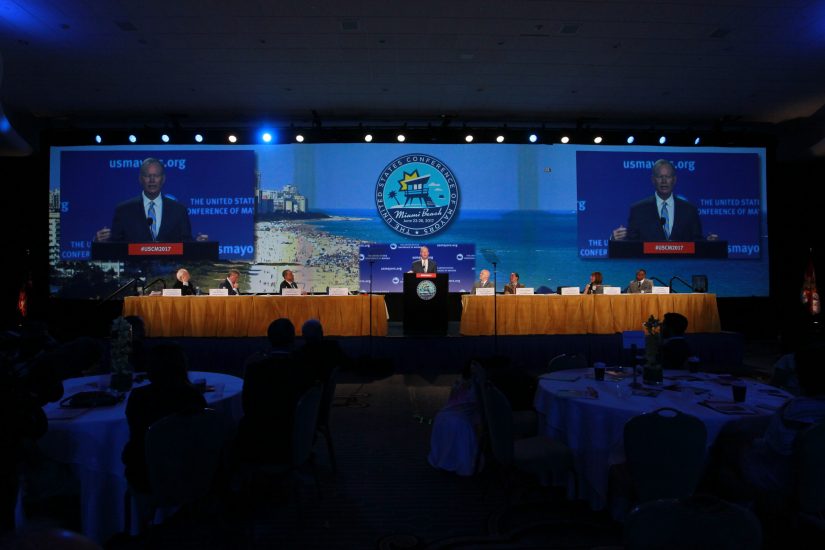 U.S. mayors say they will take the lead to increase workforce

Hundreds of mayors from around the country met in Miami Beach for the 85th Annual Meeting of the U.S. Conference of Mayors to discuss breaking through Washington gridlock to create more jobs and expand the economy.

The positive movement of the American economy is dependent on workers finding meaningful jobs. And since World War II, our population is finding this work in cities. 86% of Americans are living in cities and earning a staggering 91% of income which accounts for 91% of the U.S. GDP.

And this is driving the economic engine of today. The USCM reported that in 2016 there were 2.3 million jobs added to the economy and that more that 2 million were added in metro areas. This growth is expected to continue through 2024 in a majority of cities.

New Orleans Mayor Mitch Landrieu said in his inaugural remarks that he expects mayors to take the lead in forging more partnerships with the federal government in creating bipartisan solutions to empower more Americans.

“At its essence, this is about security, jobs and opportunity for America’s families. This is about restoring the dignity and a reputation that America has locally and globally. This is about improving the lives of all Americans. This is about making sure we don’t leave anyone behind because here is the hard truth and eloquent beauty of our country. You see, none of us will truly live up to our full God-given potential, unless all of us have the same opportunity,” Landrieu said.

What do U.S. mayors see as the problems facing today’s workers? They are aware that technological factors are “disrupting” the workforce but acknowledge more underlying factors in the weakening of the lower and middle class.

They see ongoing problems with teen unemployment, where teenagers are less likely to have a job or placed on a pathway to employment through apprenticeships. When this “disconnected” youth attempts to enter the job market, they are unlikely to have the technical skills necessary to fill vacancies. They estimate that 5.5 million of disconnected teenagers are costing an estimated $93 billion in taxpayer money.

The USCM passed a number of resolutions to improve K-12 education and to mitigate the Trump Administration’s proposed $9 billion in education funding cuts. They include creating more access for students to earn more college credits while in high school, offering better programs to alleviate college debt, emphasizing STEM education and increase arts education at the state and local level.

Investing in youth education was a priority during the conference. But strengthening the middle and uplifting the working class requires stronger partnerships with private institutions and with the federal government, which provides tax incentives, investment in infrastructure and a potential comprehensive tax reform package.

To this end, mayors want the federal government to pass an infrastructure bill with a strong emphasis on increasing apprenticeships and internships to create workers for every level. They also want more tax incentives for businesses which target low-income neighborhood to engage disenfranchised workers.

One resolution adopted at the USCM intends to address a growing infrastructure program that threatens the health of citizens like those in Flint, Michigan, where a rotting system has prevented residents from getting clean water. This problem, which is not localized to one part of the nation, comes with solutions that also address other problems with job training and employment.

The USCM suggested that the federal government adopt an infrastructure bill which allows for the training of a new workforce to remove and replace outdated water systems.

According to the Water Research Foundation/Water Environment Research Foundation, state and local municipalities are projected to spend $233 billion in water infrastructure improvements over the next 10 years resulting in a $524 billion economic impact and support 289,000 jobs.

Putting Americans into job training programs centering around infrastructure will land them secure full-time work with better pay. To make sure that these programs target low-income neighborhoods, the USCM said an infrastructure bill must be written with the cooperation of minority-focused Congressional caucuses to ensure a diverse workforce.

The USCM also affirmed more support for living wage legislation. Specifically, a resolution called for the aviation industry to adopt a $15 minimum wage for low wage airport workers. By increasing this minimum, the USCM says that the economy will increase by $20 billion over the next five years. Another benefit to increasing the minimum wage is that it is expected to help alleviate an estimated $1.2 billion per year in federal assistance which these workers use to supplement their income.

Speakers at the sessions included representatives from top companies like  JP Morgan & Chase and Co., Herbalife Nutrition and Philips. The success of their public-private partnerships with American cities shows that more cooperation between companies and their cities is changing how government works from the bottom on up. This is making our cities safer by putting people back to work.

By taking the macro problems affecting Americans nationwide and localizing them in the way that mayors are elected to do, the USCM offered pathways that allow municipalities to take the lead in solving them.

Join the Conversation: What do you think is the role of local government in solving the problems of today? Tell us on our Facebook page.