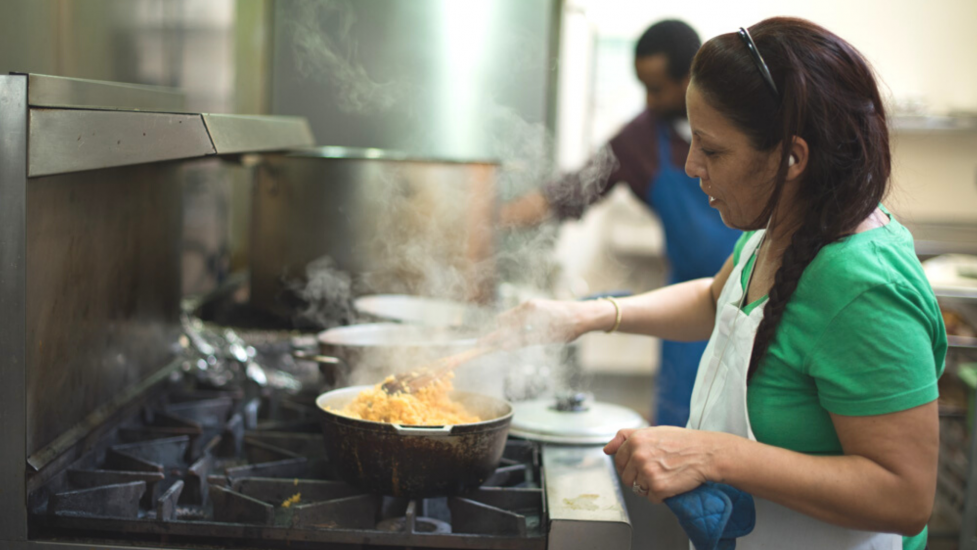 For women who want to turn their culinary passions into a career, finding a place in professional kitchens has not been easy. More than 70% of chefs and head cooks are men, while under 25% are women. Ethnically, most chefs are white.

To break down barriers in the food industry, a nonprofit in San Francisco works to provide opportunities for low-income women wanting to run their own food businesses. It’s called La Cocina and since 2005, the organization has worked with 125 businesses of which 77 are still active.

While the pandemic hit the restaurant business hard, according to the National Restaurant Association, La Cocina says some of its entrepreneurs closed locations, but none of its businesses shut down.

In April, it opened La Cocina Municipal Marketplace, described as the first women-led food hall in the country. The Marketplace features seven of La Cocina’s women entrepreneurs. “If you give people a chance, overwhelmingly what we see is that people succeed,” says Emiliana Puyana, program manager at La Cocina.

Puyana taps into her personal experience as she works to help women develop their own small businesses. She says she entered the food world with an idyllic vision that started as a child learning to cook in Venezuela.

Without resources to open her own restaurant, Puyana turned to La Cocina’s incubator program, where she started a pickling business which she operated for a few years before deciding to close it. Now, she combines her passion for food with her passion for creating equity in the food industry.

To be eligible for the La Cocina incubator program, women must be low-income and have a business plan in either of two categories – prepared foods such as restaurants and catering or packaged foods. Business plans are reviewed and food is sampled. Puyana says between 12 and 17 applicants, with viable business plans, are accepted each year.

The first phase of the program lasts about six months where participants attend classes, explains Puyana. “It’s basically like a mini food-MBA, if you will. We teach concepts around marketing, product, operations, and finances,” says Puyana.

“We are connecting our program participants with any and all the resources they might need.” That can include pro-bono graphic designers working on brand identity, food photographers, web developers, and legal services for things like permits and liability insurance, according to Puyana.

The second phase of the incubator program, explains Puyana, moves into a commercial kitchen space which is rented to participants at a subsidized rate. Staff members work with entrepreneurs to set goals, consult, and provide access to market opportunities.

‘Sometimes, I have to pinch myself’

La Cocina graduate and San Francisco native Tiffany Carter entered the program in 2019. She now has five employees and two locations for her business Boug Cali, which specializes in Creole cuisine.  She is among the entrepreneurs with a location at the La Cocina Municipal Marketplace and also sells her food at the Chase Center, home to the Golden State Warriors. “Sometimes, I have to pinch myself. Sometimes, I want to cry because I’ve always known that I would be here. But to actually be here, living it, is surreal,” says Carter.

Getting her business off the ground, Carter recalls, was “really, really rough.” After attending culinary school and obtaining a certificate in culinary arts, she ran into roadblocks. “The cost of entry in San Francisco is really high. It’s not really set up for people like me. There are a lot of barriers to entry,” she explains.

Carter recalls selling food out of her car and using her mother’s stove with one burner to cook early in the morning. Gumbo, sold in jars, is one of her specialties and she says it “kept her in the game.”

Then came the La Cocina Incubator Program which opened doors, particularly to networking. “I think the biggest thing I get from La Cocina is just being around other women entrepreneurs, other mothers, just women out there hustling for their business every day,” explains Carter.

Alicia Villaneuva counts passion and persistence for the success of Alicia’s Tamales Los Mayas. Williams-Sonoma and the Chase Center are among the places where her food is sold. “It’s not easy, but it’s not impossible,” says Villaneuva.

After leaving Mexico two decades ago, she started selling tamales on the street and going door to door. Further, to make ends meet, Villanueva cleaned homes and cared for disabled people.

She remembers selling 50 tamales a day at first, cooking them late at night and into the early morning, worried the noise from her blender might wake her neighbors.

Demand for Villanueva’s tamales started growing. “I realized I needed to be more educated about having a business,” she says. In 2010, she was accepted to the incubator program at La Cocina. “After that, my life and the life of my kids changed. It’s amazing,” she declares. She recalls it taking five years for her to launch her catering company and her own factory.

Her company, which employs 21 people, was making 40,000 tamales a month before the pandemic wiped out much of its sales. Villanueva remains positive as she works to gain new clients and build back her business.