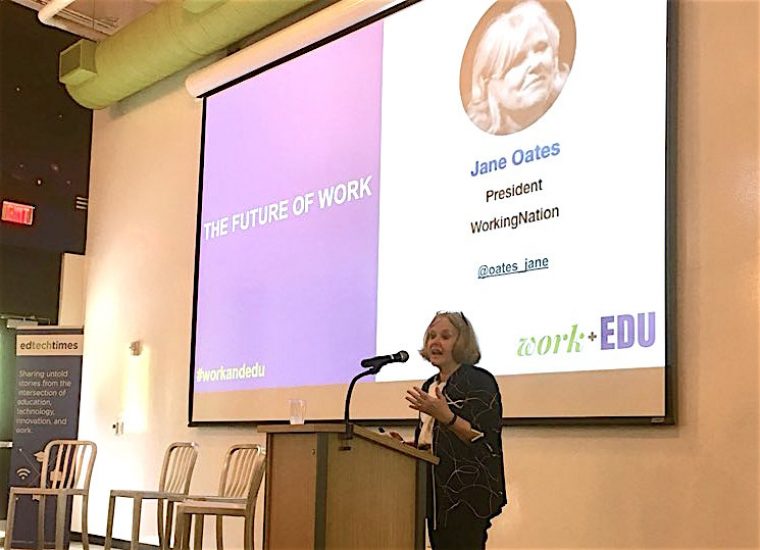 Jane Oates at work+EDU: Get ready for the future of work

The factors that are changing the nature of work affects all generations, and according to WorkingNation President Jane Oates, the changes impacting the workforce now will continue to shape the future of work.

During her keynote address at EdTech Times’ work+EDU event in Boston on June 20, Oates spoke about the causes of structural unemployment and the need for smarter collaboration between stakeholders to deliver skills training commensurate with the rapidly-changing economy.

“The pace of change is unprecedented,” Oates said in an email about her opening remarks.

She noted that technological change is accelerating and made the connection to the first Industrial Revolution, which took 140 years to bring agriculturally-based societies into the modern age. As depicted in WorkingNation’s animated short, Slope of the Curve, increasing advances in automation and Artificial Intelligence represents a direct threat to the global workforce, who could be left behind without sustainable work.

“With everything that disappears, so goes a job. This isn’t a sad story but something to get ready for,” Oates said.

To illustrate how much work has changed since the early 2000’s, Oates mentioned the World Economic Forum’s report on the future of jobs and how the so-called Fourth Industrial Revolution has created jobs that did not exist 10 years ago. Many of these jobs are in demand and require a vastly different skill set and credentials compared to previous generations. Employers want digital fluency and soft skills. And with the economy at a historic run of low unemployment, these workers are at a premium.

An unfortunate result of this skills gap affecting all industries is the inability of the education system to produce workers for the millions of job openings, which now outnumber the unemployed.

“Never before have we seen a system that is trying harder but cannot catch up with the changing economy,” said Oates.

And there is a fear that millions of Americans — especially those who have dropped out of the workforce or are underemployed — are unable to secure their economic future without access to career pathways through postsecondary education. 75 million Americans have only a high school diploma, and another 30 million have some college but no degree. Helping these workers attain credentials to join the growing fields of healthcare, data analytics, cybersecurity and more tech-oriented industries will be paramount to continued economic growth.

What’s changing in the workforce? According to @oates_jane, nearly everything. Here are some numbers: pic.twitter.com/m5KY9VuMWL

According to Oates, significant reforms to higher education will be the solution to managing the transition to the new economy. Already there are programs and curricula in place that are working to train new skills outside of the traditional four-year college. Bringing these programs to scale remains a challenge, but it will be necessary for the education system to adapt.

“The education system can only keep up if [colleges] partner with business and with other colleges,” Oates said of the reforms that are achievable today. “They need to retire antiquated courses and majors, put resources into business relationships and accelerate time to certificate or degree.”

WorkingNation has profiled the policymakers, companies and nonprofit organizations which are at the forefront of advancing this new way of thinking.

“Competency-based education is no longer a pilot [program],” Oates said. “Lifelong learning is not just a slogan.”

The shift underway in higher education to become more inclusive and accommodating to adult learners is a result of another landmark trend shaping the workplace, longevity. Oates noted that for the first time in this country’s history five generations are participating in the workforce. Those born before 1945, or Traditionalists, up to Gen Z, who were born after 1996, have upended traditional work paradigms like retirement and on-the-job training.

Americans are projected to have multiple careers over their increasing lifespans. They are also working beyond retirement age to mitigate a shrinking social safety net, largely due to federal cuts and a gig economy that does not offer benefits that full-time workers enjoy. Oates said that managing the needs of an aging workforce with younger workers will come through improving training and workplace cultures.

While predictions about the impact of automation have ranged from dire to manageable, the solutions mentioned by Oates at work+EDU can have an immediate impact on today’s workforce while simultaneously preparing it for an uncertain future.

Reducing student debt through apprenticeships or non-traditional education, improving outcomes and providing viable career pathways to in-demand jobs are all fundamental changes that will benefit all workers now and in the coming decades.

For more insight and perspective from Oates about the future of work, listen to this podcast interview with EdTech Times which took place earlier this month.

Join the Conversation: Tell us your thoughts about the future of work and the solutions mentioned by the WorkingNation president on our Facebook page.