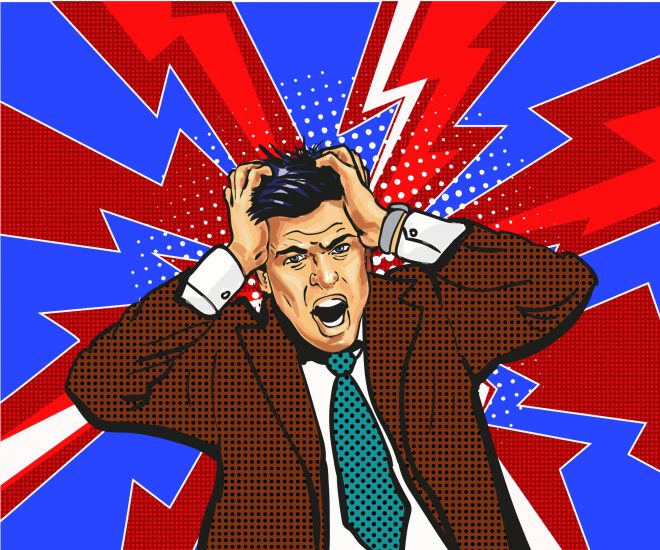 “People don’t do what’s important to them, they do what they care enough about.” – Dr. Michael Gervais

You’ve got an anger management problem. Others know it and you know it. It’s already cost you and sometimes it’s cost you a lot. It’s important to you to get control of it and fix it, but unless you care enough about doing that… you won’t.

If you’re continuing to read, I’m guessing you do care enough about it to fix it.

There are many triggers including criticism, deception, being teased, being bullied, feeling unjustly injured, humiliation, etc.

What all of these triggers have in common is that they surprise you by something happening that you didn’t expect and don’t have the inner mental agility to deal with other than becoming angry.

There is also a parallel with anger and having a rigid personality. By rigid, we mean not flexible and not able to easily adapt to unexpected events. What’s actually going on is that when something upsetting happens a rigid personality has two choices or rather two reactions.

If flighting or freezing doesn’t help, a person with a rigid personality will then choose to fight, either physically or by lashing out verbally. A wounded animal is often the most vicious, not because it necessarily wants to attack whatever wounded it. It’s because that wound signals terror that the next wound will kill it. At that point, that animal attacks because it’s a case of kill or be killed. The same is true for a rigid personality that is suddenly surprised by something he/she cannot adapt to and in what’s perceived as a life or death situation will act in self-defense will stop at nothing to destroy whatever is in front of him/her.

Related: The 7 attributes of lifelong employability

If you’re still reading this and wanting to manage your anger, you probably agree with the above explanation. However, what you’re looking for is as the title of this piece promises, a do it yourself approach to dealing with your anger.

Six Steps to Do It Yourself Anger Management

Step 1: Without editing it, make a list of the last ten situations and events that caused you to become angry and then yell or worse physically threaten (or even hurt someone — but then you may be already dealing with legal issues regarding that). Be honest, because nobody other than yourself will read it.

Step 2: Do your best to identify anything they had in common and list those. To help with that, explain, what happened that caught you off guard and then what you did to react to them. I understand that this may feel awkward because of the shame and guilt it brings up in you. I assure you that you can do this, and the shame and guilt will serve as something to further motivate you to manage and possibly overcome your anger problems.

Step 3: Identify and list people who love you, believe in you and look up to you and feel your commitment to honor them and not want to let them down. They will all tell you that one of the best ways to honor them is to fix your anger problem.

Step 4: At the beginning of each day, identify the situations and people you will be facing (check your calendar to help) where there is a significant chance of them triggering anger in you.

Step 5: Before you deal with any of those situations or people, remind yourself that they may easily trigger anger in you. Hold a bit of yourself back psychologically so that if/when it happens, you are not completely blindsided, sending you into a free fall panic which can then trigger your anger as a survival mechanism.

Step 6: If and when an upsetting event then happens, pause and say to yourself, “Get set. Here it comes.” If by itself that pause alone helps you to not become angry and hostile, great. If not, pause, take a deep breath and say to the other person, “I’d like your help right now. This is where I too often become frustrated and angry in the blink of an eye and say or do something that always makes the situation worse and that I feel deeply guilty and ashamed about afterward. I hate how I can do that and I don’t want to do that now, so I’m asking you to keep the conversation going from here until I calm down a bit.” And then be quiet.

You may be thinking, “That is too longwinded and awkward. I won’t be able to say or do that.”

I know it’s awkward and completely unnatural, but that is what makes it so disarming and can change the direction of a situation in an instant.

Here is a further enticement for you to read the above steps through and practice them until you can do them:

When as outlined above, you’re able to have the presence of mind to stop yourself from lashing out in situations where you previously did and when you’re able to bare your soul in real time and ask for help, the respect you will gain from others and yourself will astound you.

Join the Conversation: Share your thoughts about Dr. Goulston’s latest article and how you can apply his six steps for anger management on our Facebook page.