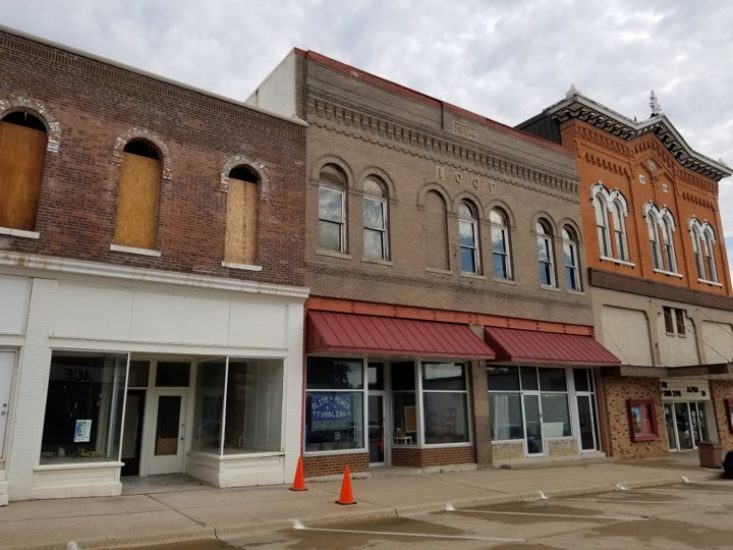 Change is coming to rural Jefferson, Iowa. It’s the kind of change that Linc Kroeger hopes will spread to more communities across the middle of the country in the very near future.

“My passion is turning around rural. It’s devastating for me to visit these rural communities that are just drying up,” says Kroeger. “Everyone is moving to urban centers. Many say, ‘I would love to live rural, but what would I do?’”

“I’m sitting in this tech creation center in Des Moines, and most of my colleagues are from rural [communities]. So, the talent is there. There’s just not the education, and there are not the opportunities for jobs and careers,” Kroeger says.

This June, Pillar is opening a new $1.7 million office in Jefferson, a six-square-mile rural town of 4,100 located about 65 miles northwest of Des Moines. They’ll be taking over a 6,000 square-foot vacant building in downtown. Right now, the tech company has about 75 tech consultants in Iowa. Kroeger hopes to eventually hire about 25 or 30 people for the new Jefferson office.

More importantly, the company is building an ambitious tech workforce training academy in Jefferson that is designed to develop a pipeline of job-ready workers and keep local talent in the region and the state. They are not doing this alone. The project is a joint effort involving the state through the Future Ready Iowa initiative, the city of Jefferson, Iowa Community College, and local K-12 school districts and is partially funded by a school bond passed last year.

Jefferson, like many rural communities around the country, has seen its population dwindle over the years as kids left to attend college in urban centers never to return.

“You grow up with the perspective of you know you’re going to leave,” says Kroeger, himself the product of a small town. He grew up about two and half hours east of Jefferson in Independence, population 6,000. “You see everybody in front of you graduate high school and leave. You don’t even talk about it. That’s just what everybody does.”

He too joined what he now refers to as “the conveyer belt,” leaving his hometown after high school to attend an out-of-state university. After decades away, work eventually brought him back to Iowa. “Five years ago, I moved to Des Moines to open an office here for Pillar, which we call the Forge, as in the classic idea that you’re forging something with metal, melting different metals and creating something industrial,” explains Kroeger. “It’s that same kind of concept, but we’re creating the future with technology.”

Forge is a culture that thrives on learning. “For us, if a new technology comes along, whether it’s mobile, or you pick it, we don’t even have to tell people. There’s no top-down push. Everybody just learns it, because that’s what we do,” Kroeger tells me. “Everything in mankind that we’ve said is going to eliminate jobs, like the industrial revolution, it always creates new jobs, if you’re willing to learn.”

To get one of those new jobs in the Pillar’s first rural Forge, applicants will have to complete a ten-course community college program, then finish up at Pillar’s new training academy.

“None of this is limited to high school. It’s just that’s the normal pipeline because most of the people we assume that would have taken this track have already left. But, there may be still some left that are doing manufacturing or agriculture.” Young adults are “where the majority of the future talent in this are gonna come from, and potentially people moving back,” according to Kroeger.

Once they complete the ten courses, they can then apply to the Academy and, if accepted, they go through six to 18 months of very specific training to prepare them for working as a software developer and consultant for Pillar. “If it takes you six months, and it takes someone else 12 months, and it takes someone else 18 months, that’s fine. Because everyone can learn at their own pace.”

The Academy is a pre-apprentice program. The students don’t get paid, but there is no cost to attend. “There’s no college debt applied to our program. It’s a debt-free option. Once they graduate the Academy they can then apply for employment with us. And, if they don’t want to work for us, there are no strings attached. They can take all that education and they can go where they want to go.” But Kroeger hopes they will want to stay.

He sees the Jefferson Forge as the first of many opportunities to help stem the talent drain from rural America.

“With the advent of broadband, there’s no question we could do this in a rural environment now. Most of my clients are on the coast. I can fly out there as easily from Jefferson as I can fly from Des Moines,” says Kroeger. “They don’t know if I’m in Jefferson, Iowa, or Des Moines, Iowa, right?”

One of the bigger objectives of Pillar Technology is to unite tech leaders behind the idea that instead of outsourcing jobs overseas — a number that currently tops 211,000 — they should be looking for ways to send them to flyover country. Pillar wants to replicate what it’s creating in Jefferson in other rural communities.

The idea of looking to the middle of the country for workers is already getting buy-in. The CEO of the San Francisco 49ers, Jed York, supports the R3 initiative and plans to tap into its talent pool. “Through VenueNext, the company that the 49ers incubated and that designed the Levi’s Stadium app, Jefferson program participants will work on a project for the San Francisco 49ers.”

In early December, Kroeger hosted a group of tech and civic leaders who support the project in a theater just a stroll from the space that will soon become the Jefferson Forge. Among those supporters was LinkedIn Co-founder and Vice President of Product Management Allen Blue, Microsoft Chief Technical Officer Kevin Scott, Costanoa Ventures founder Greg Sands, Ripple CEO Brad Garlinghouse, and Congressman Ro Khanna, who represents Silicon Valley.

On stage, these leaders championed the work done by Pillar and its collaborators. “You guys have innovation here. With the leadership being provided, and the new model you are trying here, you have the potential of creating something great,” said Blue. “The collaborative work you are doing with community colleges, government, and entrepreneurs is a powerful combination. I think Jefferson could be a lighthouse for attacking this problem all across the United States.”

Microsoft’s Scott grew up in an economically-depressed area of rural Virginia. “I believe this work can give young people in rural parts of the country, in Iowa, an opportunity to stay where they want to be,” he said. “To have opportunities for really great tech jobs, to build lives for themselves, and to build an economic foundation for themselves and for the community.”

Kroeger says he dreamed of moving back to rural Iowa for many years, but the opportunity wasn’t there. “I got married and had kids earlier in life, but after six years I was like, ‘Man, I would love to move back and live there, and have my tech career that I have now, but I couldn’t.’ It just didn’t exist.”

He’s proud that Pillar Technology is helping make that dream a reality for others. “We’re not really just bringing in jobs. We’re bringing in careers, and we’re bringing in the possibility for people’s kids and families to stay (in Jefferson). They can work on the things that they want to work on that would otherwise be out of Iowa. They can do the coolest job in the world right from there.”

Join the Conversation: How can tech companies and states work together to deliver digital skills training to rural communities? Tell us your ideas on our Facebook page.

The digital divide is not just geographic, it’s economic