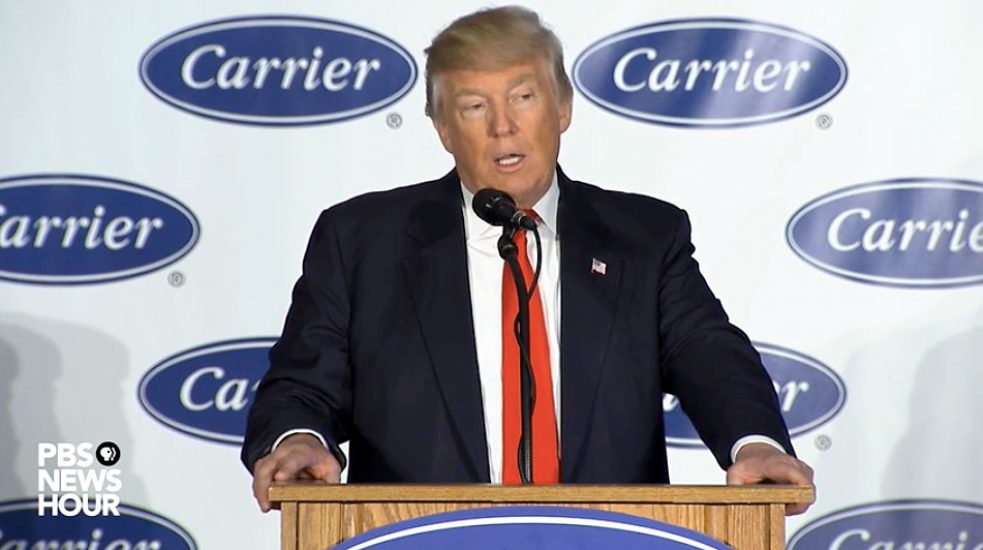 Carrier Deal a Victory for Trump, But What Can Really Help Workers the Most?

President-elect Donald Trump took a victory lap around the Carrier plant in Indianapolis Thursday with Vice President-elect and Indiana Gov. Mike Pence following the announcement the two had successfully negotiated with United Technologies, Carrier’s parent company, to cancel its plans to move its operations to Mexico.

Trump and United Technologies confirmed that the negotiations included a promise that the incoming administration would implement tax reforms lowering the business tax rate from 35% to 15% and dramatically decrease regulations. Trump also made it clear that any company that chooses to leave the U.S. would be taxed heavily to import its products back into the country. While not addressed at the press event, media outlets are also reporting that Carrier will get $7 million in tax incentives from the state if they stay.

In exchange, United Technologies agreed to keep 1,100 jobs at its plant that manufactures gas furnaces and invest $16 million to upgrade the plant over the next two years and keep it competitive. Though one wonders what those upgrades will be and if they will include robots and machines that could replace labor as a cheaper alternative.

The announcement has drawn parallels to President Obama’s move to bailout the auto industry as he entered office eight years ago saving 1.5 million jobs. And while deals and bailouts may help deliver on campaign promises and help workers in the short-term, they don’t address the biggest threat to jobs—automation.

In recent years, 88 percent of jobs lost in the manufacturing industry have been attributed to machines replacing labor, not because of trade deals like the North American Free Trade Agreement (NAFTA), as Trump argued during his campaign.

Of course, Trump’s intervention to save the jobs of Carrier employees who were about to lose them to outsourcing is a victory. But if Trump really wants to make a difference in the workforce he will have to shift his focus from bringing jobs back to filling the jobs that are here now.

The reality is that since the technological boom in 2007 there has been a dramatic shift in employment demands that has created a massive skills gap resulting in nearly 6 million unfilled positions at a time when individuals across the country are struggling to find work.

Anthony P. Carnevale, research professor and director of the Georgetown University Center on Education and the Workforce, has been focusing on solutions to this problem and appeared in our roundtable premiere episode of The Table highlighting the Carrier story.

Ahead of Trump’s official announcement Thursday, Carnevale published a story on CityLab on what the new “good jobs” in America look like. In the article and in our roundtable discussion, Carnevale emphasizes the sea change that has occurred in the need for people to have some formal education to get the skills they need in order to get a job.

“In the 1970’s, more than 70% of Americans were people who had a high school degree or less, the majority of them were in the middle class. Now, we live in an economy where 60% of the jobs require some formal education or training after high school,” Carnevale said in our discussion.

And the ones who are getting a reality check on the need for more education are factory workers who for decades were able to make a good living supporting their families on just a high school degree.

“Factories have substituted workers with a high-school education or less for new postsecondary-trained technicians working with powerful information technology. The manufacturing workforce has shifted from the blue-collar factory-floor assembly line to skilled industrial design, logistics, marketing, and other white-collar functions that add value up the line,” Carnevale writes.

In order to transform our workforce into one that is successful and competitive we will clearly need to invest in post-secondary education and vocational education on the federal and local level to meet the new demands. It will also require companies and employees to commit to a social contract that you can be a life-long employee if you are a life-long learner.

The advancements in technology are changing the landscape of the workforce in a matter of years, not decades, and everyone is going to have to realize that we are constantly going to have to adapt in order to stay competitive.

The trend is starting to take shape among young people, it’s those who are currently comfortable in their jobs, like those at Carrier, that need to add to their skills set and prepare for the inevitable—that more and more jobs are going to be retooled and if you aren’t ready you will be in for a rude awakening.