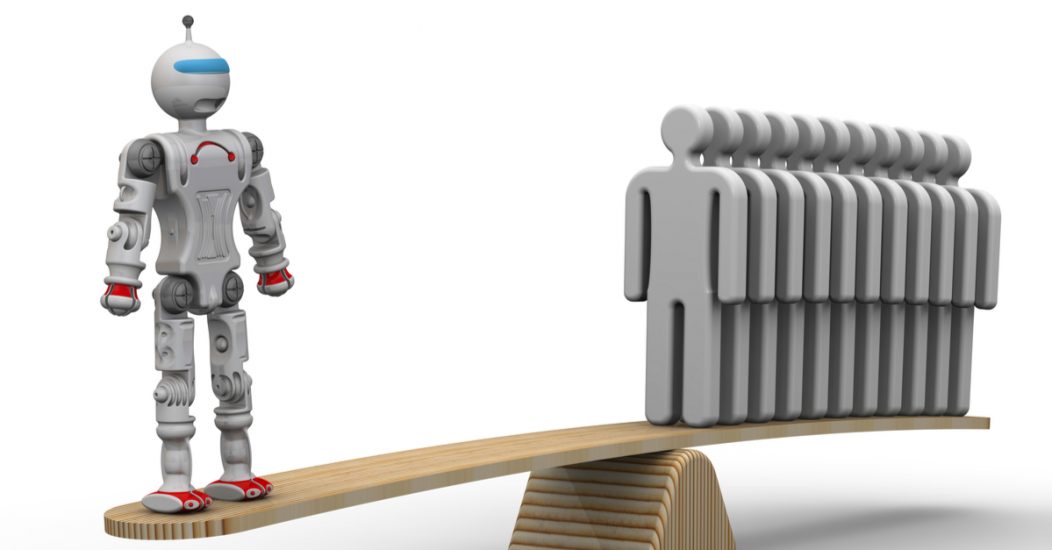 Will technology displace millions of workers, or will it create more powerful tools to change the world? A new VICE Special Report: The Future of Work premieres April 19 on HBO.
By Kristin Falzon
-
Share on facebook
Share on twitter
Share on linkedin

It’s happening whether we like it or not — jobs are changing. The Fourth Industrial Revolution is charging full steam ahead and workers are scrambling to keep up. Not just with the changing skills needed for today’s jobs but with the robots that threaten to take them. Right now, there are 7.1 million unfilled jobs — exceeding the number of unemployed — because employers can’t find workers with the skills needed to work with new technologies. This is creating a complicated situation. The question is: what are we doing about it?

A special report from VICE News, The Future of Work, produced in partnership with the Council on Foreign Relations, offers a wide-ranging look at the impact AI and automation are having on our workforce and society as a whole. Covering industries from trucking and retail to healthcare, finance and contract law, it is clear the fate of American workers in the future of work hangs in the balance.

Here are a few key takeaways.

A Cause for Riots

The U.S. trucking industry is a $700 billion a year industry and employs 1.8 million people. Up until now, it’s been pretty immune to globalization and technology, but with companies like TuSimple who are developing and currently testing fully autonomous long-haul trucks, all of that is about to change.

“We recognize this is a highly disruptive technology on the order of 10 million people and displacing that many people would have a dramatic societal impact. We certainly don’t want to see that, we aren’t targeting that. We’re focused on relieving a shortage,” Chuck Price, Vice President of Product at TuSimple, told VICE News correspondent Krishna Andavolu.

The shortage Price is referring to is the 60,000 drivers companies say they need, according to The American Trucking Associations. A number that could top 100,000 in just a few years.

While that’s a worthy mission, it’s inevitable that this technology will expand beyond the shortage and begin eliminating drivers. A fate Don Schrader, owner-operator of DSW Trucking, knows is coming, especially after he saw TuSimple’s technology with his own eyes.

Amazon is one of the biggest job creators in the world, employing more than 600,000 people worldwide. But the tech giant, which is valued at nearly $1 trillion, and its peers employ far fewer people than the richest companies in previous eras (averaging 192,000 compared to 476,000) which begs the question, who or what is doing the work? The answer: cobots, or collaborative robots.

In 2012, Amazon introduced the first robots into its warehouses. Since then, the company has created 300,000 jobs in fulfillment centers across its workforce, according to Tye Brady, Amazon Robotics Chief Technologist.

But it’s hard to know how many more would have been employed without the robots and at what point will those workers who work with the robots become unnecessary?

But if you ask the workers, and follow the money, it’s hard not to be skeptical.

“I haven’t been put in a position where I can be creative. Pretty sure a lot of people haven’t,” Jav, an Amazon associate who works in stowing with robots, told VICE News.

From 2015-2017, Amazon held competitions where college teams designed robots to do more or less what Jav does all day — single out objects, grab them and stow them in a specific place. The problem is that a robotic hand with the dexterity of a human hand has yet to be developed. A problem that has engineers racing in search of a multi-billion-dollar, potentially trillion-dollar, solution.

A Call for Action

“We as a society have not even begun to have a sustained or comprehensive national conversation, and what worries me is by the time we really get around to dealing with this, it’s going to be too late,” warns Richard Haas, President of the Council on Foreign Relations (CFR).

MORE: Read CFR’s report on the future of work

“A perfect world is that we have enough investment that we could grow to meet both the size of the demand and the size of the supply,” said Kelly Richardson, managing director of Newark and New York Per Scholas.

Per Scholas is a nonprofit providing a solution to the skills gap issue in today’s workforce as the shift to more tech skills requires workers to update their skill sets. But a lack of resources is holding the program back.

MORE: Per Scholas: Three solutions to the cybersecurity worker shortage

“We have more employer partners who are willing to hire than we have graduates for. We have more students who are applicants applying to Per Scholas than we have spots for,” Richardson explains. “The domestic investment in workforce retraining is so small and the impact automation is going to have is not going to be equitable. There really should be some critical thinking and some action that legislators are taking to invest in programs like this.”

For decades, the federal government has taken action to fund reskilling efforts, but in today’s dollars that funding has fallen for years. And there appears to be two different viewpoints as to who is responsible for helping workers get reskilled.

One view is to get private industries to invest in their own workforces of the future, a strategy the Trump Administration is pushing with its Pledge to America’s Workers initiative. The other is to give people a dividend or Universal Basic Income (UBI) to free them up to invest in their training and education.

“This is a race we will not win. The goal posts are going to move the whole time on us,” says presidential candidate Andrew Yang. Yang proposes giving people a $1,000 a month dividend with the idea “that all of us are owners and shareholders of the richest society in the world that can easily afford $1,000 a month per adult.”

A similar idea is being tested in Stockton, California where 125 residents are receiving $500 a month over 18 months.

“UBI is about getting our foundation set in the present so that when the future of work happens we have a firm foundation on which we can pivot and figure out what we can do with and for people,” says Stockton Mayor Michael Tubbs.

“Politicians are going to have to start engaging in these issues to figure out what’s politically feasible. It’s going to trigger fundamental debates about things like a Universal Basic Income, that everybody ought to get money and then the question is, ‘where is that money going to come from?’” says Haas.

No matter what policies are floated, the broad consensus is that, right now, things aren’t working.

You can watch the VICE News special report, “The Future of Work,” tonight, April 19 at 10 pm EST on HBO.

Will technology displace millions of workers, or will it create more powerful tools to change the world?A new VICE Special Report: The Future of Work premier…

‘Robot-Ready’ or not, the future is coming

Penny Pritzker at ASU + GSV Summit: We need a generation of lifelong learners