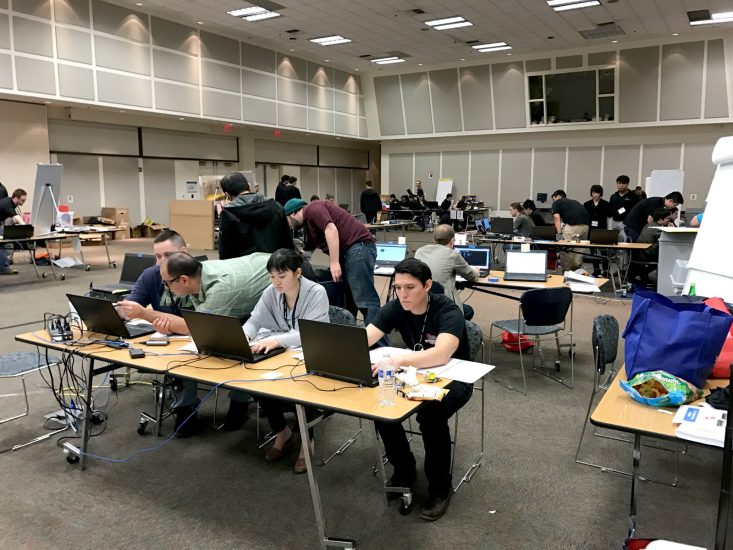 How March Madness Can Lead to Jobs

Each March college teams from different regions of the country are competing in a grueling head-to-head tournament. Each regional champion moves on to the final round of the tournament where a champion will be crowned. The winning school will forge its place in collegiate history and the competitors will display their significant accomplishment proudly.

But it’s not that tournament.

While America is focused on their television sets for basketball and March Madness, there is another tournament taking place amongst many universities across the country, far from the limelight — the National Collegiate Cyber Defense Competition. Each regional champion moves on to the final round of the tournament this month at the National level in San Antonio, where a champion will be crowned.

Despite these similarities, there is a major difference between the two tournaments — the pathway to employment. In basketball, only 1.3% of college players will play professional basketball and earn high-paying salaries. The other 98.7% will attempt to use their degree or basketball experience to begin a career.

On the other hand, the cybersecurity tournaments are well known for creating direct pipelines from college to work. At the Western Regional competition (WRCCDC), hosted by one of the competitors — Cal Poly Pomona, eight schools competed for two days, focusing on managing and protecting a commercial network infrastructure.

The teams simulated the labor of a network administration group by administering a small business network, while defending against advanced, outside cyber-attacks targeted at their network and operating systems. The tournament allows the teams, comprised of eight student competitors, a chance to test their knowledge in an operational environment while experiencing real-time, high-pressure incident response.

Dr. Dan Manson, who serves as the chairman of Computer Information Systems at Caly Poly, believes that what the students learn over the course of the competition is equivalent to many months of classroom education or even more importantly — on-the-job experience.

“The value of the competition is immense and having it listed on a student’s resume is a major check-plus for their capability,” says Dr. Manson.

Rafael Munoz is a senior at Cal State University Northridge. Munoz just completed his fifth competition and will graduate this spring with a bachelor’s in Computer Information Technology.

Munoz knows that having the competition listed on his resume was a huge advantage when he was applying and interviewing for his current internship.

“It showed that I can work in a high-stress, fast-paced environment. It also highlighted other essential skills because to succeed in the competition you need to be able to work well in groups and communicate efficiently. It’s also necessary to have effective presentation skills. These are skills that are attractive to employers and it gave me something to talk about while in the interview.”

Munoz currently is in a paid internship with The Aerospace Corporation. He hopes that it eventually will turn into a full-time job. That prospect seems likely as most of Munoz’s fellow CSUN teammates already have jobs lined up in the security and computer science field once they graduate this spring.

Based off many analyses and reports, these careers are among some of the best and most promising options in the labor force that are achievable with a bachelor’s degree.

According to a 2015 analysis from the Bureau of Labor Statistics, more than 209,000 cybersecurity jobs in the U.S. are unfilled despite job postings rising 74% over the past five years. The field will see a growth rate of 36.5% through 2022. The gap is even larger globally. Symantec, the world’s largest security software vendor, states that the demand is expected to rise to 6 million globally by 2019, with a projected shortfall of 1.5 million.

While March Madness is a wildly popular staple of American sports culture, the CCDC is relatively unknown outside of the cybersecurity bubble. That’s unfortunate for many reasons, but the one that rises above all is that the CCDC, and other security competitions, are common pathways to great careers.

Jobs in the cybersecurity world are vastly unfilled, have tremendous projected growth, extreme longevity and offer excellent pay, so if your basketball skills aren’t pro-worthy, perhaps it’s worth exploring the world of cybersecurity.