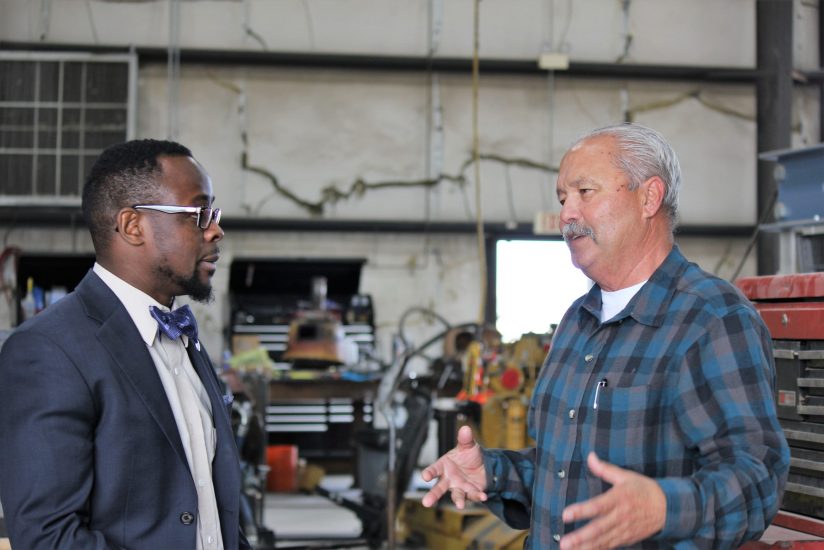 Nevada looks to apprenticeship programs to build on jobs growth

Nevada is feeling the fruits of its labor getting its economy back on track following the Great Recession. And with hundreds of thousands of jobs in the pipeline, the state is focusing on apprenticeship programs to reduce the skills gap and fill these high-quality jobs. WorkingNation's Ramona Schindelheim speaks with two key leaders on the benefits of these programs.
By Ramona Schindelheim
-
Share on facebook
Share on twitter
Share on linkedin

Nevada’s economy soared in 2017, leading all other states in year-over-year jobs growth, a trend that continues into 2018. Great news for Nevada businesses and workers now finding their footing after the worst recession in the state’s history. Business, union, and state government leaders are currently looking to apprenticeship programs to keep the recovery on track.

During the Great Recession, Nevada topped all states in unemployment, as well as bankruptcies and home foreclosures. After hitting double digits for the first time in January 2009, the jobless rate hit a staggering 13.7 percent in the last months of 2009 and, even though it was slowly declining, remained in the double digits through April 2013.

By comparison, 2017 was a banner year. At 3.3 percent, the state had the fastest private employment growth in the nation. The jobless rate has been steady at 4.9 percent for the past few months. That’s higher than the national average, but still a far cry from the nearly 14 percent nine years ago. Jobless claims clocked in at an annual average of 11,000 in February, which is the lowest number since 2006. Last year, healthcare, education, and professional and business services led in job growth.

“By 2024, Nevada will have more than 600,000 available jobs, with approximately half of these jobs being newly created,” according to Manny Lamarre, executive director of Governor’s Office of Workforce Innovation (OWINN). Approved by the state legislature in 2017, OWINN’s mandate is to “provide leadership in creating career pathway strategies in the fields of information technology, advanced manufacturing, education, and healthcare,” says Lamarre. “Nevada is on the right track to not only reduce the skills gap but to ensure Nevadans have on-ramps to high-quality careers.”

Apprenticeships are playing a significant role. The expansion of the Tahoe-Reno Industrial Center — the largest industrial park in the world — will create hundreds of new jobs for companies such as Tesla, Google, Panasonic, and Switch. The companies are working with the Truckee Meadows Community College to develop courses and programs that will create the skilled workforce they need. Many of these programs are apprenticeships coordinated by the Nevada State Apprenticeship Council, which offers opportunities in manufacturing, healthcare, and other industries.

Construction — which had been particularly hard in the Recession — is one of those industries. It’s also playing a big role in the state’s economic comeback with more than $15 billion worth of construction planned in the Las Vegas area over the coming years. One of those projects is the new 65,000-seat, $1.8 billion Las Vegas Stadium, the future home of the Las Vegas Chargers.

On an unpaved, dusty road just 30 minutes north of the bright lights Vegas Strip sits the William C. Waggoner training center, an unassuming one-story building surrounded by acres of rugged terrain. It is here that 130 men and women gather three times a week to learn how to operate heavy construction equipment such as cranes and dozers, how to repair the equipment, how to survey a construction site, or how to inspect a building site. The other two days of the work week are spent working and learning on an actual job site.

They are part of the Southern Nevada Operating Engineers JATC (SNOE) apprenticeship program, and they are training for union jobs that pay $65,000 plus benefits a year to start. After graduating from the 3-year program, most will be part of the team that will soon begin building the new stadium.

The Las Vegas SNOE program is a registered apprenticeship, recognized by both the state and by the U.S. Department of Labor. For the program to qualify as a registered apprenticeship, the participants must earn wages from employers while they are being trained. The program must provide both on-the-job education and job-related instruction. Most importantly, the participants must walk away from the training with an industry-recognized credential.

I was given a tour of the Las Vegas training site recently by Louis Loupias, the program’s coordinator, and OWINN Executive Director Lamarre. Afterward, we sat down to discuss the SNOE program. Both men are enthusiastic supporters of the program, and apprenticeships in general, as a way to continue to grow jobs in Nevada. They also see them as a pathway to a rewarding, lifelong career. Here is some of our conversation, edited for clarity and flow.

RS: What is your sales pitch for the apprenticeship program?

LL: It’s earn-while-you-learn. You’re earning money, and you’re learning a trade. It’s the education and the training without the debt. There’s an actual dollar that you’re getting, especially for individuals that are coming in without a skill. Getting training and still getting paid while you’re getting that training is very important.

ML: It’s transferable skills with a nationally-recognized credential. And it is a concrete skill that allows you to really provide that stability for yourself, your family, and for the community. The apprentices are getting $27 an hour plus another $22 in benefits.

LL: You can take this skill anywhere in the world. We have guys that go to Saudi Arabia, the Middle East, wherever. You kind of follow the money, if that’s what you choose, or you stay right here because we’re going to have a big, big building boom here.

RS: Where do you recruit businesses and apprentices for your program?

ML: One of the things that the youth say is ‘How can we get experience if every job we apply to requires experience?’ A big part of my soapbox is talking to employers, saying, ‘Look, we will open the heavens to make sure you have input on the curriculum or the credential in the training. But we want you to commit to either interviewing your students for consideration or providing them work-based learning such as an internship opportunity so they can further connect the dots and get that experience.’

LL: We’re also having a lot of success with the military.

ML: Absolutely. We need discipline. We need work ethic. Teamwork. Experience. They have those skills.

RS: When we toured the site we saw, men and women of all ages out on the training course. Tell me about some of them.

LL: Marina (Arajuo, age 37) chose the apprenticeship so she can provide a better living and be an example for her children and family and anything is possible if you put your mind and heart into it. Joseph (Pastorelli, 22) was tired of working non-meaningful jobs without any chance of a career or advancement. It’s a career path.

LL: We go from a minimum of 18 up to 65. It’s an alternative because a majority of your kids only have two choices, either go to college or you go into the military service. We like to call the apprentice program the best-kept secret because not too many school counselors and officials really promote apprenticeship programs.

ML: One of the things we’re doing actually to address that is we’re working with the high schools, putting both construction and manufacturing equipment on-site. We’re trying to get businesses, organizations that are willing to be engaged in a process earlier on. It’s not actually apprenticeship, but, a work apprenticeship-readiness kind of thing, where we want employers and associations to commit to either interviewing or hiring the students and providing them the engagement on the front end.

RS: What kind of training do the apprentices receive?

LL: What we teach our apprentices is you learn best by seeing, by hearing, and then going out there — by doing it. Some of them come as security guards, nurses, or whatever, and we teach them how to operate the machinery correctly. And then it goes hand-in-hand with knowing how to read the plans. All those wood stakes with little ribbons on them have meanings (elevation, slope, and grading). So, you have to know how to read all that stuff.

ML: Technology is pushing that, right? The jobs are changing. Other skills that are important here, and any other apprenticeship, are critical thinking and problem-solving. The jobs that are being created also focus on how you fix that equipment.

LL: Everything is going electronic. These heavy equipment machines are all machine-controlled. They can take a 1,000-square-foot area, and put it on automatic machine control, and be accurate within the size of a golf ball in the 1,000-square-foot area. (Pointing to a drone.) That’s all GPS. But you still have to teach them the basics. If your satellite goes down, you still have to finish your project.

RS: Who are some of the key companies that you work with?

LL: Las Vegas Paving, the Nevada Test Site, Aggregate Industries, Wells Cargo. There are smaller companies like Maui One or Lone Mountain. The employer has to look at the potential employee as an investment. And that’s why the construction trades are very successful in their apprenticeship program because the employer knows that if I invest in this individual, by the time he gets finished through the apprenticeship program, and I keep mentoring him through his career, he’s going to make me lots and lots of money.

ML: We have people that are out of work. We need to connect them to work. Organizations like the Operating Engineers do that well.