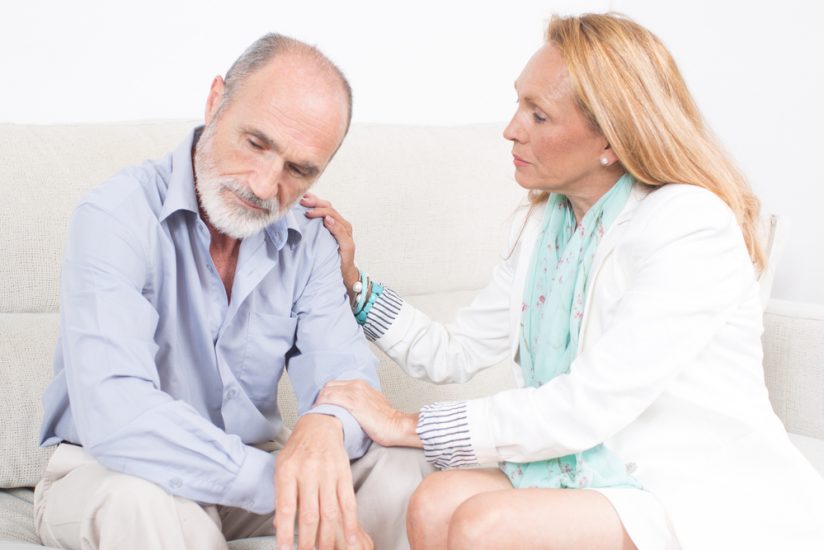 Someone you love is out of work and stuck. Really stuck.

Mark Goulston, M.D. is WorkingNation’s featured writer for July. He is an award-winning business psychiatrist, consultant for Fortune 500 companies and the best-selling author of seven books. His latest, Talking to Crazy: How to Deal with Irrational and Irresponsible People in your Life can be found on Amazon. This is the first of four articles from Dr. Goulston.

Your spouse is between 35 and 60. He (more often than she) has been laid off or replaced by automation and needs to learn new skills to make him hirable.

Instead of jumping up and sinking his teeth into new skills and especially technological skills training, he is withdrawn, sullen and tells you to get off his back, leave him alone, or leave him the (expletive) alone.

You give him all these links and articles about what to do to get back to work, but he never looks at them.

You tell him he’s got to do it for the kids, which only makes him shut down more and then when nobody’s looking start crying from a deep pain he can’t get past.

Doesn’t he want to build himself up?

Here is the deal or should we say his deal:

The less competent a man feels the less confident and less in control he feels. And having been specialized in a job or skill that has gone away and being intimidated by all the new technology that younger men under the age of 35 automatically grasp, your man no longer feels competent, confident or in control.

In essence he feels useless, worthless, powerless, helpless and hopeless.

And what do all those words have in common? It’s the –less. And that translates to without usefulness = useless, without worth = worthless, without power = powerless, without help (that works) = helpless, without hope (a future) = hopeless.

Put them all together and he feels despair. More accurately he feels des-pair, meaning unpaired with all of those reasons to live.

What you worry about when he is most withdrawn and when you’re afraid to leave him alone is that he will pair with a way out of all his pain. And you don’t want to say it, but you know what we’re talking about. It’s the “S” word and we’re not talking “sex,” we’re talking “suicide.”

You know he feels that way and if he would just speak to you and just tell you how he feels – you wouldn’t feel less about him if he just admitted his fear – you know he might feel better, might feel lighter, and just might feel like trying to come out of his prison instead of remaining locked in it.

You know that if he would speak and “pair” with you, he might not need to pair with desperate ideas of how to lessen the pain.

Here is one thing you haven’t tried.

Pardon the psychologically clumsy term, but it is called, “Mediated Catharsis.”

In essence, what you do is facilitate his saying some awful negative things that he doesn’t dare say either because they’d just upset you, burden you further, or convince himself further what a loser he is. But before you use it, give it some thought as to whether you feel okay about it.

Here is what you say to him in a firm but non-pushy tone:

“Hey I got something I want to try that might help this crappy situation. Just play along with me and then you can tell me to ‘F— off’ or ‘Leave you alone.”

He may be dumbfounded but hopefully will play along if only for a moment.

Then look him intently in the eye with a determination to help him feel less alone, help him be able to “pair” with you and help him to “feel felt” by you.

Then say: “(His name), look me in the eye like I’m looking in yours and say, ‘Would you just get off my f–ing back? Don’t you get it? I’m too dumb to learn anything new. I haven’t learned anything new in decades. The world has no place or use for me. I’m toast! Can’t you understand that? I’m out of work and never going to work again. All I am is useless and worthless and a burden to you! Can’t you just get it? I’m afraid. I’m f–ing afraid!”

He may continue to look stunned at you, but coax him and repeat it and say, “C’mon just look into my eyes and say those words or change them and say your own words. Don’t think about them. Just look me in the eyes and say them.”

There is a good chance that he will be hesitant at first, but as he starts to speak, encourage him with, “Yes! You’ve got it! That’s right! Don’t hold back!”

What you are likely to see as he’s saying those words is that he will crack and start to cry with the relief of not feeling alone with all those feelings.

Also since you are overseeing the conversation with the aim of helping him get all this pus out and off his chest, you’re not going to get defensive or rush in to reassure him or even get scared, because you’re just going to notice all the relief he is feeling as he is speaking and crying.

Keep encouraging him and prodding him to say more.

Don’t rush him. Let it takes its full course.

He will finally reach a point where he will feel relief that he hasn’t felt in a long time (for some men, it’s something they have never felt).

At some point he will finish crying and don’t be surprised if he smiles, because, not to be too vulgar, you have safely given him a “high colonic” and he will feel lighter and clearer.

Again don’t rush him, but at some point say in a calm, loving, friendly voice, “You okay?” If you time it right, he will say, “Yes.”

Finish it with, “I love you and it’s going to be okay.”

Don’t rush him with advice or solutions. Just hug him.

When this works, he will be the one to initiate saying, “Maybe I can try to learn some stuff.”

If he says that, veto it and say, “There will be plenty of time for that. Right now I just don’t want you to feel alone in hell and I’m going to see about joining you there when you slip back into it. Would that be okay?”

To inspire you, here is a famous clip from Rocky III, where Adrian does something similar to get Rocky out of his funk. Yo Adrian!

Sounds too Hollywood for you? Who knows? It could work.

Run it through your mind and use it if you feel nothing else is getting through and all he is getting is more sullen.

Coming next Monday: Dr. Goulston gives advice for unemployed people who think they are too old to learn valuable new skills.

Join the Conversation: Does Dr. Goulston’s advice make you feel like you can conquer the world (or at least motivate the one you love)? Tell us what you think on our Facebook page.