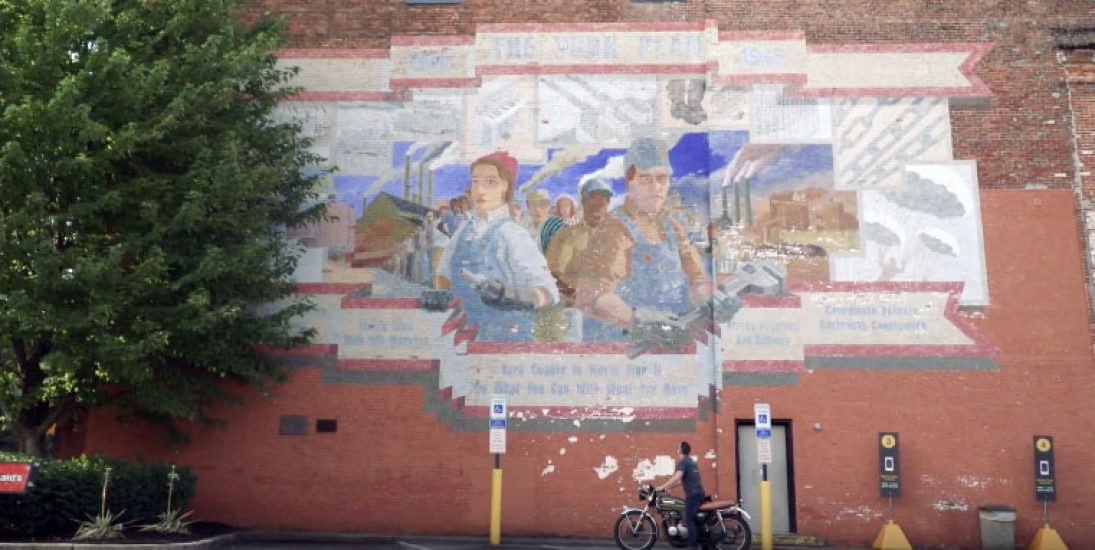 Automation is disrupting the workplace. Each year, for the past eight years, robot sales in the United States have hit a new record. Right now, there are more than 200 robots per 10,000 employees in American manufacturing plants alone, more than double the number in use in Chinese factories, according to the World Robotics Report. A third of the tasks performed in 60 percent of all occupations could be automated today and that percentage is growing, according to a McKinsey report, potentially forcing as many as 375 million people to switch job categories.

It’s the latter that military veteran, entrepreneur, and futurist John McElligott is obsessed with. He’s predicting — counting on — robots to spark an economic and employment revolution, not replacing those 375 million job-switching people, but working alongside them. He’s latched onto his adopted hometown of York, Pennsylvania, as the spot to create the country’s first robotics hub, and to reinvent a once vibrant manufacturing community while doing so.

“Robotics represents what we believe to be the first truly inclusive technology ecosystem, from PhDs down to mechanics. We’ve been machine builders, from people that have developed new technology all the way down to welders and fabricators,” explains McElligott. “Robots is a technology you can touch. We’re good with our hands, and we know how to take things apart and put them together.”

McElligott was inspired to put down the roots of his hub in York by a 79-year-old economic initiative dubbed, simply, the York Plan. As America was gearing up for World War II, York businesses realized they were too small separately to compete for defense contractors. Without those contracts, businesses would shutter, people would be out of work.

The York Plan brought together the community’s entire inventory of factory capacity and manpower. Every company became part of a collaborative defense company, contributing pieces, parts, and labor. It began locally and spread nationally, becoming a catalyst for growth across the entire country during wartime.

The original York Plan was a 15-point outline that, fundamentally, is everything that San Francisco’s been doing for the last decade, according to McElligott. “It’s crowdfunding, crowd sharing, accelerated education, maker spaces. Manufacturing became Uberized. Competitors let each other use their equipment in their downtime. The idea was no one company could build a tank, but together everyone could build a piece of the tank, which quickly became a piece of everything.”

Another key element was that people were upskilled on a weekly basis. It’s this kind of innovation, collaboration, and efficiency that McElligott believes will save and invigorate a community and its people that are facing disruption by the tech evolution. He calls his initiative York Plan 2.0.

“We want to create citizen scientists, people that are rapidly trained in the industry of artificial intelligence and robotics, primarily focusing on manufacturing, and then expanding out to other verticals in industries,” McElligott says.

YorkEx CEO John McElligott talks about the original York Plan of the 1940s – the plan the saved the world.Now, York Exponential is committed to bring back th…

He’s planted the seeds of augmentation, launching York Exponential, a robotics company, in 2015 and The Fortress Academy, the first licensed higher education institution creating a generation of robot mechanics in 2017. Purposefully un-Silicon Valley-like, The Fortress Academy is reminiscent of McElligott’s Marine Corps days when he served as a combat engineer. Think of it as the start-up mentality in the body of a military installation.

Instead of semesters, students are put through an accelerated timeline of 15 weeks, working with human-size robots, learning welding, fabrication, electronics, computer programming, service, repair, installation, and more. It’s attractive to former members of the military with manufacturing know-how, like the Academy’s first-star student and graduate, Daniel, who worked in the motor pool for the Marines.

McElligott revels in sharing how Daniel participated in a York Exponential Robothon, a robot hackathon. Within 30 hours, Daniel programmed a robot to play games with a monkey. He previously worked with a non-human primate lab and noted monkeys “will go insane” without stimulation. So, he programmed his robot to be triggered by a bored monkey to play games. When it was no longer bored, the monkey would let the robot know, the robot would return the monkey to his cage, and move onto the next monkey.

“We never anticipated robots and monkeys working together. “Robots and humans, we thought. But never robots and monkeys,” says McElligott who was impressed and offered Daniel a job on the spot. Daniel now works at the Academy, alongside the degreed scientists, to develop and refine curriculum and programs. McElligott sees him as the first of many veterans in a train-the-trainer model as York Plan 2.0 spreads from city to city.

“We’re going to make York the epicenter of the American robotics revolution to inspire small communities across the United States,” according to McElligott. “York can be a beacon. We’ll spread out through central Pennsylvania and then expansion sites like Iowa, Wisconsin, Puerto Rico, and Massachusetts. There are a lot of communities just like us.”

Creating the First Generation of Superheroes

The state stepped in last year to foster the fledgling idea of turning York into a robotics hub. “It took about three-and-a-half years, but Governor (Tom) Wolf, after hearing about the York Plan 2.0 consistently and seeing the steam that we started to build downtown, ended up giving our group $6 million to begin the building phase one of the world’s first innovation districts around humans and robots working together.”

“The Northwest Triangle is right in the center of our city, and it’s the last largest undeveloped piece of land. It used to be Ohio Blenders, so it was one of the largest job providers. It was a big factory that got demolished about two decades ago, and it’s sat vacant pretty much since then, with the city really waiting to make sure that whatever goes in there is a flagship and determines the direction of the city,” he explains.

“What we’re building now is a 240,000-square-foot innovation campus, all designed to be robotic assembly and fabrication, research and development, education, and good walkable jobs for folks in the city. The goal is to create, essentially, the first generation of superheroes. We’re empowering this generation of kids to view technology as something that can embolden them and give them the ability to do things greater than themselves, but really with a heavy focus on good middle-class jobs.”

While this kind of transformation takes time, the York County Economic Alliance (YCEA) sees this as a great opportunity for York and towns like it. “Pennsylvania has 50 other cities sandwiched between the great metros of Philadelphia and Pittsburgh, each similar to York, but varying in size and scale. Philly and Pittsburgh have made significant transitions in their economies. Areas like York are on the cusp,” says Kevin Schreiber, YCEA President and CEO.

“Working to our favor is an economically lower cost-of-living with easy access to major metros,” he continues. “York Exponential has helped galvanize the discussion of what our future economy may look like, and how our strong base of manufacturing remains a competitive advantage in a future intertwined with AI, robotic augmentation, and IoT.”

“The whole community is rallying around this idea of the York Plan 2.0, remembering our history. Man and machine are what made York strong in the past and creating the first American robotics ecosystem as a way to prepare our nation for the Fourth Industrial Revolution,” adds McElligott.

McElligott notes interest in being part of the York Plan 2.0 experiment is bipartisan, and that is what he is most proud of. “Everyone is agreeing that this is necessary,” he says. “We’ve managed to create an ecosystem in York across party lines. The future doesn’t care if you’re a Republican or a Democrat. The technology is moving. If we don’t do something, we’ll all be left behind.”