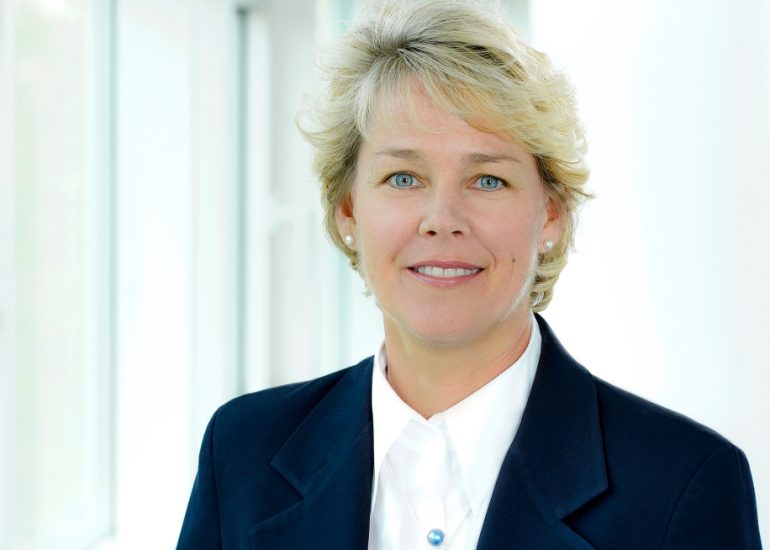 WorkingNation consultant and workforce reporter Ramona Schindelheim continues her series of interviews with America’s top CEOs about solutions to closing the skills gap.

*Editor’s note: After we conducted this interview, layoffs were announced at Siemens. We have amended this article to include a statement from Lisa Davis on those job cuts, and have requested an official comment from Siemens, which we will post here.

The portfolio for Siemens Corporation is vast — manufacturing, software solutions, systems, consulting — providing products and services to thousands of businesses in dozens of industries including transportation, energy, health care, and finance. At its core, Siemens is a technology company.

“We’re reinventing ourselves as a fully digital company, just like many of our customers,” explains Siemens Corporation Chairman and CEO Lisa Davis, “And that requires a range of high-tech skills, from engineering to advanced manufacturing to information technology.”

Siemens Corporation is the American subsidiary of the German conglomerate Siemens AG, a 165-year-old company, and Europe’s No. 1 industrial manufacturer. It is also one of the world’s leaders in providing technical solutions.

Siemens has a presence in all 50 U.S. states and employs more than 50,000 workers, with 10,000 of them working in manufacturing. But reinvention doesn’t always come easily. Just Thursday, the company announced it will cut 6,100 jobs by 2020, 1,800 of them in the United States, because of changes in the way electricity is generated.

“The power generation industry is experiencing disruption of unprecedented scope and speed,” Davis said in a statement announcing the job cuts. “With their innovative strength and rapidly expanding generation capacity, renewables are putting other forms of power generation under increasing pressure.”

For Siemens, that means fewer gas turbines are being sold.

“Siemens is a true technology company in the areas of electrification, automation and digitalization. So, we need employees who have backgrounds in the STEM fields and who are comfortable working with software and digital tools,” says Davis.

Siemens sees upskilling its current employees, as technology evolves, as a business necessity. “The need for re-skilling the workforce is an important factor in challenging and fast-changing marketplaces, as we are seeing in the energy market. We train electrical engineers in the field of robotics, service technicians in digital analysis of operating data, and production specialists learn how to understand digital twins,” says Davis.

The digital twin concept is a modern key to productivity — a bridge between the physical and digital worlds. It allows workers to use a virtual model of a physical process to analyze data and monitor a system to anticipate and prevent problems before they occur. It also reinforces Siemens’ belief that employees have to become lifelong learners and the company should help them achieve that goal, for their mutual benefit.

“One thing we’ve found is that, as our skills need change, our training efforts need to move faster. Many of our service technicians serve customers all over the country. If they had to train on each site, it would take a long time to get them trained. We responded by investing in virtual reality equipment, so technicians can train on customer locations all in one place,” explains Davis.

Just as important to Siemens is investing in future employees, “from apprentices to college students, to people coming back to the industry, to veterans coming back home,” Davis says.

The apprentice program is particularly expansive and impressive. “We’ve transferred the proven German apprenticeship model to the United States,” Davis tells me. “The program is pretty straightforward. Young people join us after graduating from high school. They get paid while accruing on-the-job experience in our facilities. They also complete an associate’s degree at a community college in fields such as mechatronics. At the end of four years, they graduate with no debt, as we cover tuition while also paying them. They receive a guaranteed job with us, starting at around $55,000 per year. And they earn a certificate that allows them to work as a journeyman, a welder or manufacturing technician in other parts of the country.”

Partnering with educators is essential to reskilling the workforce, Davis says. “Each apprenticeship program we have involves a community college partner; we design curricula together and also work together to update them. On one hand, this is a model that has been around a long time. On the other, it remains relevant as technology evolves because it forges new partnerships between companies and educators that are ultimately responsive to industry trends.”

Davis calls Siemens’ apprenticeship program “the gold standard” in business and says that the company’s initiatives toward reskilling and educating the workforce have been so successful in attracting talented workers that the company decided to expand its efforts.

“We provide three times more on-the-job training and more than 10 times more college hours than is typically required by programs registered through the U.S. Department of Labor,” Davis says, “This year, we committed to doubling the size of our apprenticeship programs by expanding to a total of eight states, and granting an additional $2 billion worth of industrial software (to educators). Recently, we invested $750,000 to help the University of Central Florida open a new lab where students will learn how to run a digital grid. We also invested $2 million to open a new training center in Chicago for computer-controlled machining.”

Siemens is also committed to hiring an additional 1,000 veterans over the next three years, according to Davis.

“We’ve made a strong effort to hire veterans –we currently have approximately 2,500 US military veterans working for Siemens. We’ve hired veterans with diverse backgrounds across all military branches, for example, Aviation Mechanics, Navy Engineers and Nuclear Surface Warfare Officers, all putting their skills to use in new ways,” says Davis.

Davis echoes what we’ve heard from many other companies: veterans have the skills and values that help make a business thrive.

“They bring with them a host of transferable skills, ideas and approaches which translate into a range of roles, from leadership to project management, field service and manufacturing. Our PLM software business launched a program in 22 cities across the country, which provides free training software technologies like computer-aided design, manufacturing or engineering.”

When it comes to closing the skills gap, “companies need to lead, but partnerships are critical,” Davis tells me. “No company, government, foundation, or academic institution can do this alone. We have to work together. The Siemens Foundation is involved in policy discussions and has a strong partnership with the National Governors Association focused on scaling training models that are getting good results. I recently visited my Alma Mater, UC Berkeley, one of the many universities around the globe that Siemens teams up with for R&D and innovation. The current projects there, predominantly in the area of new smart grid solutions, were impressive. But even more impressive was the discussions I had with the students on the campus. These young people not only have the capabilities, but also the will to take advantage of new technologies like artificial intelligence and to use them for a better future. That was very promising.”

“Ultimately, training and educating workers is vital to our business and vital to the entire U.S. economy,” says Davis. Siemens’ mission to reskill its workforce, and invest in the workforce of the future, is designed to make the company more competitive and successful, but, according to Davis, there is a higher purpose.

“We must prepare ourselves for the digital economy and make sure everyone has a pathway to develop the knowledge-based skills that exemplify our digital economy,” Davis says. “Digitalization will change everything, the way we live and the way we work. If a worker is under-skilled, that’s often a barrier to a higher-paying job and a middle-class life. As a company, we do see tackling the issue of under-skilled workers as social responsibility. Our (Siemens AG) CEO, Joe Kaeser, says all the time: ‘a company that doesn’t create lasting value for society shouldn’t exist.’ And that’s really our mission statement.’”