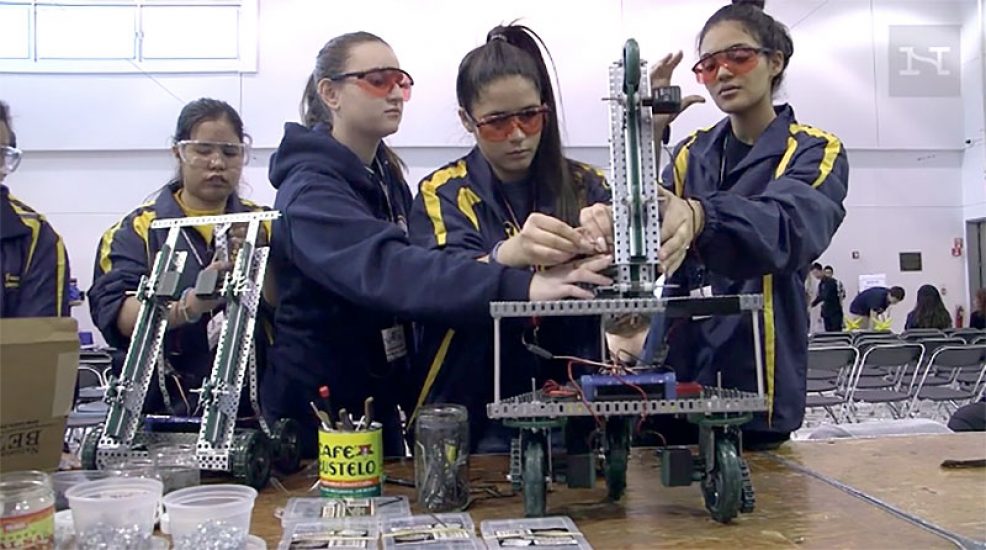 The field of robotics is growing very quickly as is the push to get students access to and excited about the STEM education needed to create the technology and artificial intelligence that is emerging in several different industries. Despite this push, minorities and girls are still extremely underrepresented in STEM careers.

One school in the northeast Bronx is making its mark with the first all-girls team to compete in a national robotics competition. Led by coach Sheree Petrignani, the Comets, from St. Catharine’s Academy, will take its Cobra robot, a unique and smaller triangular robot, to the national stage at the VEX U.S. Open in Waukee, Iowa.

Petrignani built the robotics program from the ground up when she came to the school in 2011. It took her a year to design the curriculum and recruit students for the competition team. To pique interest, she designed a summer intensive course for potential middle school talent, encouraging promising students to register for high school robotics.

Team leader Angelique Taveras, 17, says robotics has helped her build the foundation of who she is and seeing her older teammates receive college scholarships to pursue engineering degrees inspired her to chase the same goal. In December, Taveras found out from the Posse Foundation she was one of ten students from minority backgrounds selected to attend Lafayette College class of 2021 on a full-ride.

More and more schools, companies and organizations are recognizing the need to garner interest in STEM fields that are growing at a rapid rate and are working to get young people the skills they need to fill these jobs. Some examples of these programs are highlighted below.

Girls Who Code is one organization who is helping bridge the gap and start a pipeline of talent as early as middle school across all 50 states.

MORE: Girls Who Code: Nurturing the Next Generation of Engineering Leaders

Toyota is one example of a company that has partnered with schools to re-design education to fill millions of highly-technical jobs with people able to do them. By giving students the opportunity for hands-on training that will result in a job out-of-school, the program is breaking the stereotypes of skilled trades while filling the skills gap.

MORE: FutureWork: Model of the Future

The Aspen Institute College Excellence Program and the Siemens Foundation have joined forces to raise the profile of middle-skill jobs in STEM fields and the community college programs that deliver first-rate preparation of young adults for such jobs.

MORE: Raising the Profile of Careers in STEM Fields