Home What We're Reading “There are three Americas growing apart at an accelerating rate.” 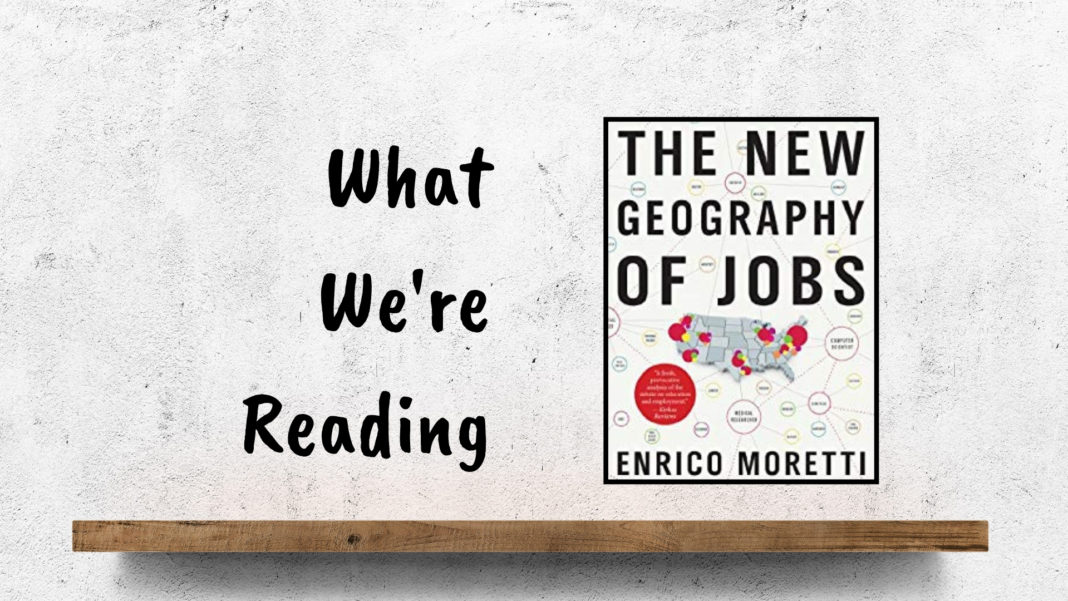 Editor’s note: When we decided we wanted to include a blog on the WorkingNation website about the books we’re reading about the future of work, we knew there was only one person to write it — our researcher, Eve. She’s read every book and report written on the subject and her knowledge on the changing workforce is unsurpassed. Trust us. She’ll point you in the right direction.

In 2014, I graduated from college with what I was certain was a well-rounded, informative, and thorough education that guaranteed I was prepared for my future. What I immediately discovered, however, was the exact opposite. Despite those four heavily academic years, I knew so very little about the reality of the rapidly changing world of work into which I had just been thrust.

Fortunately for me, someone suggested I read Enrico Moretti’s The New Geography of Jobs, and by the time I was even halfway through the book, I had come to understand the urgency of, and value in, facing the inevitable economic truths, regardless of how daunting they made my future seem.

The book takes on issues that I imagined as complex economics and mathematical problems and made them relatable, visual, and almost obvious in explanation. Moretti, an economics professor at U.C. Berkeley, expertly dissects the current economic crisis in a way that goes deeper and more precise than the typical loud chatter you hear surrounding political debates across many news sources. The book was written in 2012, but the truths it told then are still true today.

“Today there are three Americas. At one extreme are the brain hubs — cities with a well-educated labor force and a strong innovation sector. They are growing, adding good jobs and attracting even more skilled workers. At the other extreme are cities once dominated by traditional manufacturing, which are declining rapidly, losing job and residents. In the middle are a number of cities that could go either way.”

One of the things that truly shocked me was the fact that we are currently living in a time that marks a painful and unique moment when Americans are not finding themselves better off than their parents or grandparents — the exact promise of the mythical American Dream.

As Moretti explains, “this means that for the first time in recent American history, the average worker has not experienced an improvement in the standard of living compared to the previous generation. In fact, he is worse off by almost every measure. On top of this, income inequality is widening. Uncertainty about the future is now endemic.”

This harsh reality is hard to face. While cities are desegregating racially, they are dividing instead based on schooling and earnings, and the result is an America separated into three distinct parts: brain hubs, traditional manufacturing capitals, and cities that have the potential to go either way. And the scary truth of it all is that the very thing that drives growth in brain hubs — human capital — has the potential to destroy manufacturing jobs and economies.

For the brain hubs, innovation and technological progress drive steady productivity and earnings increases year after year. And while these innovation jobs will never be responsible for the majority of jobs, they do have a disproportionate effect on the American economy: for each new high-tech job in a city, five jobs are created outside the high-tech sector for both skilled and unskilled labor. This means the two-thirds of Americans working in local service sector jobs represent the effect of economic growth rather than the cause.

“The three Americas are growing apart at an accelerating rate. The paradox is that the very success of the country’s engine of growth is generating a deep & growing inequality among American communities.”

Moretti’s book helped me understand the connection between geography, education, earnings, and job opportunities, and in feeling informed, I felt empowered to take charge of my future. Now, over four years later, I still refer back to facts I learned in that book as often as possible and have continued to use what I learned from Moretti to guide my personal and professional research into the future of work.

And I still feel compelled to share some of the eye-opening observations and statistics Moretti wrote about in his book. I feel that my family and friends — and everyone else — genuinely need to know these things in order to better understand how to prepare for the future in an unpredictable and unprecedented time.

Eve Bilger is WorkingNation’s Research Associate. She graduated from the University of Pennsylvania with a B.A. in English with a specific emphasis on creative writing. She is WorkingNation’s most voracious reader of books about the future of work.

Toyota takes a proactive approach to its need for skilled workers