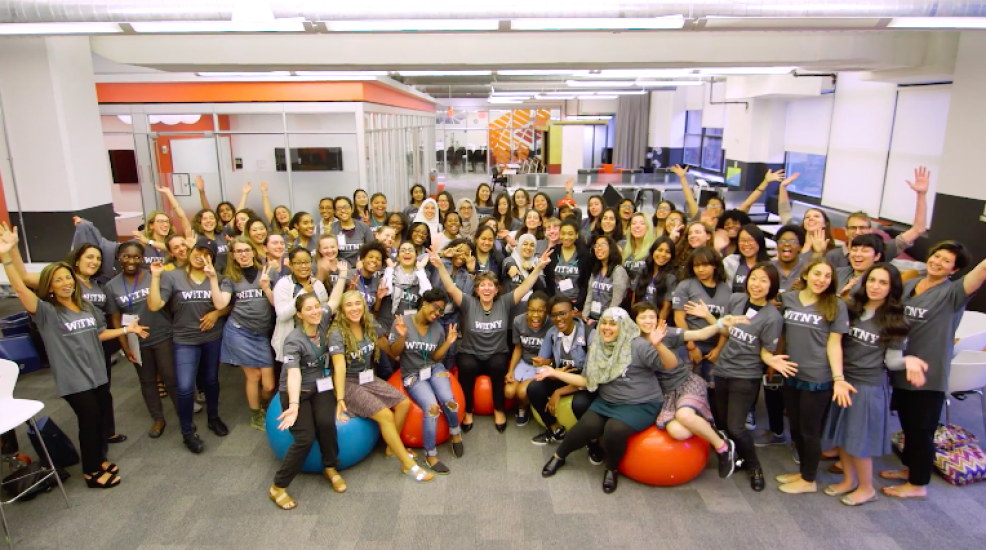 It seems as though the world experiences a new technological advance every other day. But despite this ongoing revolution, and the jobs it generates, the number of women entering the tech industry is not keeping pace. A public-private collaboration based at Cornell Tech is working to close that gender gap by helping more women in high school and college break through barriers that are keeping them out of the tech workforce.

Founded in 2016, the Initiative for Women in Technology and Entrepreneurship in New York (WiTNY) is a joint venture between Cornell Tech in New York, the City University of New York (CUNY), and a growing list of corporate partners that includes Verizon, JPMorgan Chance, Accenture, Mastercard, and IBM.

Its founding program director, Judith Spitz, spent more than 30 years in tech, eventually rising to the rank of Senior Vice President and Chief Information Officer for IT Strategy and Planning at Verizon. “If we can move the 0.9 percent of women who major in computer science closer to 5 percent nationally, it would double the number of computer science-educated students entering the workforce.”

Over the past 30 years, the participation of women in computing has actually dropped dramatically. “Thirty-seven percent of the graduating classes of computer science were women back in 1985 when I started my career, and by 2006 that number hit 18 percent, and it’s been sitting at that 18 percent number for the last 10-plus years. It’s startling, actually. Because of course, in that same 30 years, technology became the driver of most jobs.”

WiTNY is trying to bend the curve in the other direction, Spitz tells WorkingNation. “The whole mission of the organization is to deliver programs in tech ecosystems that will double the number of undergraduate women that are choosing to move in this direction.”

While the lack of women in computing is a national issue, Spitz decided to focus her efforts on the fastest-growing tech ecosystem in the country – New York City. According to the WiTNY website, the New York tech market is growing more than three times faster than any other industry job market.

“The students who go to CUNY are 85 percent students of color and almost 50 percent first-generation coming from families earning less than $20,000. They do not have the world experiences. They can’t afford to take unpaid apprenticeships that put them in real-world environments. They can’t even necessarily go to weekend hackathons because they’re working two and three part-time jobs.”

“One of the biggest challenges that we found is that these young women — as much as companies say that they want to hire a more diverse workforce — still go through a pretty standard interview process.” WiTNY wants to change that.

Spitz says these economic barriers puts students at a huge disadvantage when they apply for the all-important summer internship, a key opportunity for them to get their foot into the tech-industry door. “The single most important thing to getting a job when you graduate is your summer internship. This has been shown by research (to be) more important than your GPA, more important than where you go to college. These young women were not able to get through that first door. It’s like a catch 22.”

It’s here, she says, WiTNY’s corporate partners are playing a major role in more ways than simply funding. They’re working in traditional and non-traditional ways to open previously closed doors to women whom they might not have ordinarily considered.

“One of the flagship programs that WiTNY has is what we call a Winternship. This is a paid three-week internship in January, between your first and second semesters for freshmen and sophomore women.” The goal, she says, is simple: “Give these young women some resume juice. Give them something that’s a credential on their resumes and a story that they can tell. But do it in a way that’s very low risk for the companies.

“If you’re gonna hire a summer intern during your peak summer internship season, and the young students have to sink or swim, that’s a bigger risk. Take a few students in January, pay them what you pay a junior intern, that’s low risk for these companies,” according to Spitz.

In 2018, 177 students and 46 companies took part in WiTNY’s Winternship program. Spitz calls the results “astounding.” “The young women’s lives are transformed. The actual data shows that their ability to land a job, the application to offer ratio was less than 5 percent without this kind of a program. And the students who went from this program landed a job at 54 percent.”

Programs like — will become even more vital as technology continues to advance, potentially leaving a growing number of women out in the cold. One example is in the field of automation where traditional positions staffed predominantly by women are seen as increasingly vulnerable.

According to an analysis by New America, these at-risk jobs include personal assistants, administrative staff, cashiers, and fast food workers. New America found women make up 54 percent of the workers employed in these at-risk occupations, even though they make up less than half of the total labor force. And studies by the International Monetary Fund show that, on average, women face an 11 percent risk of losing their jobs to automation compared with 9 percent of men.

Spitz is careful not to focus on the negative. “If we only think about it as you’re either developing the technology or you’re losing your job because of the technology, you’re missing really what the essence of the future of work is going to be, and where I think the opportunity is.” She believes the future is going to require a collaborative effort between workers and technology, including artificial intelligence.

Programs like WiTNY can lessen the impact of automation on female unemployment by providing training, internships, and mentoring that can lead to new employment and greater upward mobility as the workplace landscape moves from labor-based to knowledge-based jobs. Spitz tells WorkingNation that, in addition to helping participants land new jobs, WiTNY is beginning to revitalize the traditional makeup of corporate workplaces, a substantial change from her firsthand experience in the tech industry.

“After spending 30 years at Verizon, rising up the technology ranks, I realized that I had spent most of that career, number one, being the only woman in the room, or close to it. And number two, actually not paying that much attention to that because, as many of us working women, work people in general, we’re too busy trying to get the job done to pay that much attention to the ecosystem.”

But, says Spitz, it’s the corporations that are now beginning to take notice, thanks to WiTNY. “What’s equally as amazing is that the companies themselves come to us and they thank us because they are so energized by having these young women who look different, who are different in their workforce. It really opens their eyes to the true meaning of having a diverse workforce.”