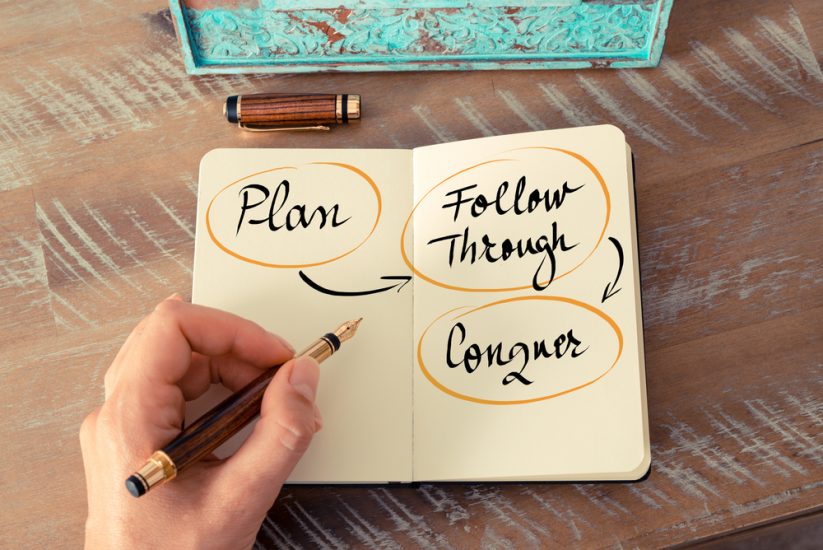 10 tips to improve your follow-through at work

follow-through (noun):  The completion of a motion, as in the stroke of a tennis racket. The portion of such a motion after the ball has been hit. The act of continuing a plan, project, scheme or the like to its completion.

That seems simple enough. So why don’t people, including you, follow through?

Initially many people make promises with good intentions, but then run into what it will actually take to get it done that they hadn’t considered. And within a short period of time, the law of entropy intervenes, which means that after your initial enthusiasm around the idea fades, to actually get something done takes work and along with that motivation to do it leaves and you go back to your usual activities.

Imagine making a footprint in the sand and imagining it will remain after the next wave hits. The only way to keep the footprint from being washed away or for you to stay true to your good intention is to fortify it from the inside and outside.

To fortify your promise, you have to commit to integrity – i.e., keeping your word – as being a core value that you don’t veer away from. It is something people will notice, respect and tell others about you if you have it and especially if you don’t have it.

Integrity is simply doing what you say you’ll do, when you say you’ll do it and at the first sign that you will not be able to do it, repairing any and all damage to everyone that will be negatively impacted before you move on.

Realize that when you say you are going to do something, that is perceived by others as a promise, a commitment and something in their minds they feel entitled to rely and count on you for and hold you accountable.

RELATED STORY: In the automation age, bring results, not excuses

Now of course no one is making you actually do it – unless not doing it gets you demoted, causes you to lose a raise or get fired – but not following through means you’re having to face the consequence that others will stop relying on you, trusting you, having confidence in you, respecting you and liking you.

And if you say, that’s not fair.  I beg to differ.  It’s completely fair whether you accept it or not.

After you have fortified your promise from the inside by wanting to be viewed by others and yourself as having integrity, here are 10 other things to help you fortify it even more.

Maybe the simplest way to remember it is… follow through means never having to say you’re sorry.

Join the Conversation: How have you improved your follow-through? Share your strategies for success on our Facebook page.