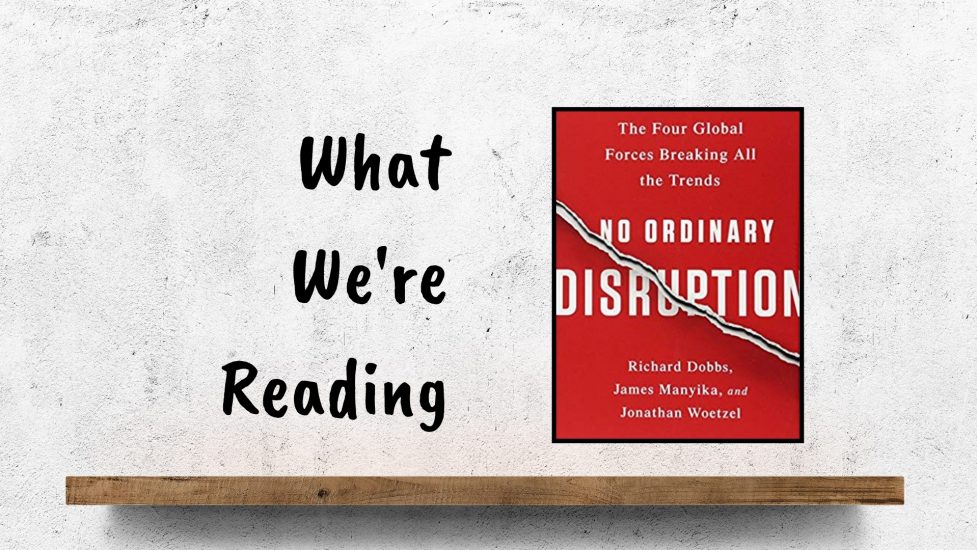 “Our intuition about how the world works could well be wrong”

As the title suggests, No Ordinary Disruption: The Four Global Forces Breaking All The Trends, examines how the impact of accelerating technological changes, globalization, shifting demographics, and the shifting locus of economic activity are creating unmatched and unprecedented transformations throughout the entire world.

Written by the directors of the McKinsey Global Institute, Richard Dobbs, James Manyika, and Jonathan Woetzel tell the impactful story of how these forces we see and feel playing out in our societies and economies are truly new to the world and will have profound and perhaps earth-shattering influences on how we all live, work, consume, and thrive well into the future.

As the authors put it, “this is true disruption to the status quo” and as a result, our ability to successfully respond to this disruption will take a deep understanding of the ways in which our world is transforming.

Changing demographics in age, population size, education levels, and more are transforming our world into something entirely new. By exploring global changes in population and generation size, the authors helped me understand just how quickly the composition of the world’s workforce is developing.

Combined with longer life expectancy and “unfavorable demographics,” there will be “fewer people working, more people receiving benefits,” and “the elderly will be less able to afford to retire.” The authors explain that “the aging and shrinking of the workforce is unprecedented in modern history, and the disruption will affect us all.”

Also remarkable is the fact that “by 2025, nearly 2.5 billion people will live in cities in Asia — that’s one of every two urbanites in the entire world. In a little more than a decade, China could have more than triple, and India double, the number of urbanites the United States has today — about 250 million.”

Understanding how these changes affect jobs was particularly valuable for me. I learned that between 2001 and 2009, “nearly three million production and transaction jobs disappeared” while “nearly five million new interaction jobs were created in the United States.“ Additionally, “trade in knowledge-intensive goods is growing 30 percent faster than trade in labor-intensive goods.”

The book walked me through how significantly different today’s technologies progress from invention to widespread adoption because the truth is that “one of the most striking aspects of the new age of accelerated technological change is the sharply increased pace of adoption.”

“After Alexander Graham Bell invented the telephone, more than 50 years elapsed before half of American homes had one. It took radio 38 years to attract 50 million listeners…Half of all Americans acquired a smart phone within five years of the devices’ introduction.”

“In 2009, two years after the iPhone’s launch, developers had created around 150,000 applications. By 2014, that number hit 1.2 million, and users had downloaded more than 75 billion total apps, over 10 for every person on the planet.”

Also compelling were the examples of how massive our data capabilities are today: “One Exabyte of data is the equivalent of more than four thousand times the information stored in the U.S. Library of Congress. By 2020, the volume of data could reach more than forty thousand exabytes — an increase of nearly three-hundred-fold since 2005.” Remarkably, “global online traffic rose from eighty-four petabytes a month in 2000 to more than forty thousand petabytes a month in 2012 — a five-hundred-fold increase.”

What really caught my attention time and time again throughout the book were the jaw-dropping examples of how quickly new technologies have allowed countries to grow.

Britain took 154 years to double economic output per person, and it did so with a population of (at the start) of nine million people. The United States achieved the same feat in 53 years with a population (at the start) of 10 million people. China and India have done it in only 12 and 16 years, respectively, each with about 100 times as many people.

In other words, this economic acceleration is roughly 10 times faster than the one triggered by Britain’s Industrial Revolution and is 300 times the scale — an economic force that is 3,000 times as large.”

In the face of today’s unprecedented pace and scale of change in demographics, population, globalization, and technology, the authors make a poignant statement we can all learn from, whether we’re an employee, an employer, a student, or a government official: “Agility, the ability to act quickly and nimbly in response to problems that arise, is a vital attribute for thriving in the age of accelerating global flows.”

As individuals and as members of regional, national, and global communities, if we focus on how and why the forces are disrupting all the trends, we can hopefully learn how best to adapt so that we can truly thrive in our new modern world.

Eve Bilger is WorkingNation’s Research Associate. She graduated from the University of Pennsylvania with a B.A. in English with a specific emphasis on creative writing. She is WorkingNation’s most voracious reader of books about the future of work.