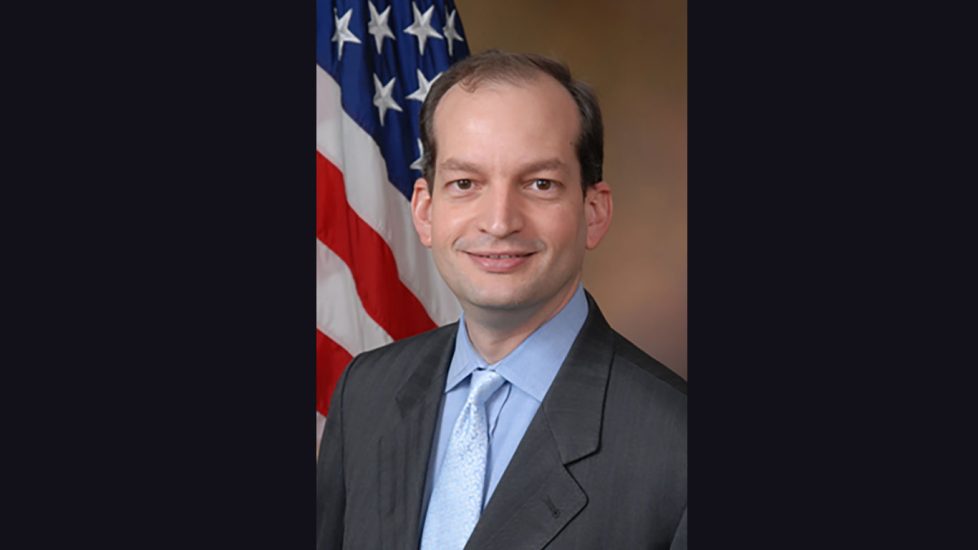 The president apparently didn’t waste any time once Puzder officially withdrew his name, meeting with Acosta Wednesday evening, according to Bloomberg reporter Jennifer Jacobs. Shortly after their meeting, the White House announced that Trump would reveal his pick early Thursday afternoon. At the press conference, Trump said he wished Acosta the best and he thinks he’s “going to be a tremendous Secretary of Labor.”

In January, the economy added 227,00 jobs and the unemployment rate ticked up very slightly to 4.8 percent, according to the latest data from the Bureau of Labor Statistics. The labor force also grew by 584,000 people last month, raising the labor force participation rate by 0.2 percentage points, meaning more people were looking for work.

As Labor Secretary, Acosta will be charged with enforcing rules meant to protect American workers. Something he knows about well from his time as a member of the National Labor Relations Board from Dec. 17, 2002 through Aug. 21, 2003, where he participated in or authored more than 125 opinions. As a member of the board, Acosta was tasked with safeguarding employees’ rights to organize and to determine whether to have unions as their bargaining representative. The agency also acts to prevent and remedy unfair labor practices committed by private sector employers and unions.

In contrast to Puzder who had no public service experience, Acosta also served as assistant attorney general for the Civil Rights Division under President George W. Bush for just under two years until his resignation in June 2005. He has also served as Principal Deputy Assistant Attorney General in the Civil Rights Division and, more recently, as the U.S. Attorney for Southern District of Florida where he was the longest serving U.S. Attorney in the District since the 1970s.

If confirmed, Acosta would be the first Hispanic in Trump’s Cabinet. According to his bio on FIU’s website, he has twice been named one of the nation’s 50 most influential Hispanics by Hispanic Business Magazine, and he was named to the list of 100 most influential individuals in business ethics in 2008.