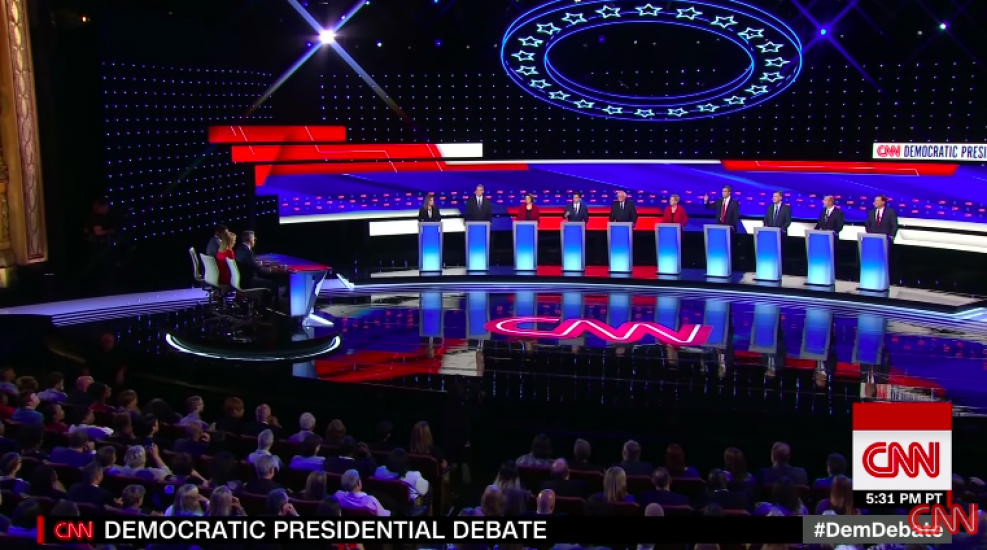 As 20 candidates for the Democratic nomination for president lined up in Detroit for two nights of debates, just 10 miles away in Warren, Michigan, the storied General Motors transmission plant was preparing to shut down its assembly line for the final time at the end of the week.

President Obama won Macomb County, the plant’s home, in 2008 and 2012. Yet President Trump carried the county by nearly 12 points in 2016 after visiting the plant a month earlier and proclaiming, “If I’m elected, you won’t lose one plant. […] You’re going to have jobs again.”

While a few of the candidates mentioned jobs on night one, it was businessman Andrew Yang who hammered it home in his opening remarks on Wednesday. “We’ve already automated away millions of manufacturing jobs, and chances are your job can be next. If you don’t believe me just ask an auto worker in Detroit.”

On the first night…

So, did the candidates get the message? Former Maryland Congressman John Delaney kicked off night one trying to appeal to the local audience, hitting on one of WorkingNation’s key points: to solve the issue of jobs, the solutions will be found in local partnerships.

“Look at the story of Detroit, this amazing city that we’re in. This city is turning around because the government and the private sector are working well together,” he said. “We need to encourage collaboration between the government, the private sector, and the nonprofit sector, and focus on those kitchen table, pocketbook issues that matter to hard-working Americans: building infrastructure, creating jobs, improving their pay.”

Vermont Senator Bernie Sanders said he was “delighted that Detroit is rebounding.” But then attacked the past trade policies “which allowed corporations to throw workers in this community out on the streets as they moved to low-wage countries.”

Then it was Congressman Tim Ryan’s turn. Ryan’s Ohio district includes the now-idled GM plant in Lordstown, and he was clear without taking on the automaker by name. “America is great, but not everyone can access America’s greatness. The systems that were built to lift us up are now suffocating the American people. The economic system that used to create $30, $40, $50 an hour jobs that you can have a good, solid middle-class living now force us to have two or three jobs just to get by.”

Former Texas Congressman Beto O’Rourke offered his support for the opportunities that Green New Deal jobs could provide. “The people of Detroit and those that I listened to in Flint last week, they want the challenge. They want those jobs. They want to create the future for this country and the world. Those community college students that I met in Tucumcari, New Mexico, understand that wind and solar jobs are the fastest-growing jobs in the country.”

As the night continued, the candidates weaved the need for good, new jobs into other issues, including Massachusetts Senator Elizabeth Warren’s proposal for the Green New Deal. “So I’ve proposed putting $2 trillion in so we do the research. We then say anyone in the world can use it, so long as you build it right here in America,” she argued. “That will produce about 1.2 million manufacturing jobs right here in Michigan, right here in Ohio, right here in the industrial Midwest.

Minnesota Senator Amy Klobuchar took on another challenge, offering her plan to solve the massive debt created by student loans, as a solution for the skills gap. “So what I would do… is that I would allow people to refinance it at a better rate and I would make sure that we improve those student loan repayment programs for our teachers and expand them so that you literally — over 5, 10 years — can get it paid for if you go into occupations where we don’t have enough workers,” she said.

And when asked specifically about GM’s job cuts and what his plan was for retraining workers, South Bend Mayor Pete Buttigieg switched gears. “Empty factories, empty houses, poverty. I know exactly what happens to a community when these closures take place. And there will be more…. It’s why we actually need to put the interests of workers first. Of course, we need to do retraining. We’re doing it now in South Bend. We should continue to do it.”

He turned his attention to the gig economy. “This is about a moment when the economy is changing before our eyes. There are people in the gig economy who go through more jobs in a week than my parents went through in their lifetime. It’s why I’ve proposed that we allow gig workers to unionize because a gig is a job and a worker is a worker,” said Buttigieg.

And on the second night…

On night two, things picked up right where they left off on Tuesday. Washington Governor Jay Inslee attached the topic of work to his core issue, climate change. “My plan is one of national mobilization, quickly bringing 100 percent clean energy to Americans, creating eight million good union jobs.”

It was a theme echoed by U.S. Senator Kirsten Gillibrand of New York. “Why not rebuild our infrastructure? Why not actually invest in green jobs? That’s what the Green New Deal is about.”

Senator Cory Booker of New Jersey told a personal family story to support his message of hope, “My mom is sitting there who was born in the city of Detroit, born to a guy… that was a UAW worker, my grandfather, who pulled his family out of poverty in the Depression. My grandmother joined him. She was really entrepreneurial, opened a pool hall and a laundromat right here in this city. That is the American dream.”

Former HUD Secretary Julian Castro noted GM’s job cuts as an example of the economic uncertainty facing the country but stopped short of offering any opinion or solutions. “Go and just ask the folks that just received notice that they are going to get laid off by General Motors. Or ask the many folks who are sleeping on the streets in big cities and small towns across the United States. Or ask fast-food workers that I joined a couple of weeks ago that are working for minimum wage and can’t provide for their families or pay the rent.”

When former Vice President Joe Biden brought up GM, it was not about the job reductions but to remind the voters in Michigan of the 2009 GM bailout under the Obama, administration. “I was part of the organization — and within our administration — that pushed bailing General Motors out, saving tens of thousands of jobs here in this state. ”

Did any one candidate talk about the future of the worker?

So did anyone on the Fox Theatre stage take Regina Duley’s question to heart? Along with health care and the environment, the issue of jobs affects nearly everyone. Neither the moderators nor the candidates seemed to give it much thought beyond trying to weave it into the context of other subjects.

But it was Yang who was able to connect the dots. “If we say, look, we’re going to get health care off the backs of businesses and families, then watch American entrepreneurship recover and bloom,” according to Yang. And he took on one of President Trump’s core allegations on immigration. “If you go to a factory here in Michigan, you will not find wall-to-wall immigrants, you will find wall-to-wall robots and machines.”

Yang threw a little shade on the entire debate process, in the end. “Instead of talking about automation and our future, including the fact that we automated away four million manufacturing jobs, hundreds of thousands right here in Michigan, we’re up here with makeup on our faces and our rehearsed attack lines, playing roles in this reality TV show.”

“We need to be laser-focused on solving the real challenges of today, like the fact that the most common jobs in America may not exist in a decade, or that most Americans cannot pay their bills.”

WorkingNation would love to hear more on this subject from all the candidates at future debates.